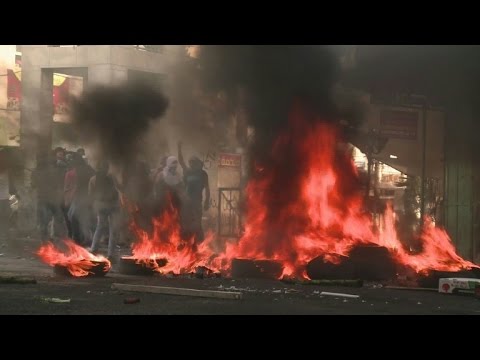 HEBRON (Ma’an) — As the death toll has risen across the occupied Palestinian territory, the southern West Bank city of Hebron has found itself at the center of violence.

In just over a month, Israeli forces have killed 10 Palestinians in the sharply divided city. The toll, second only to that of Jerusalem, is indicative of a tension that has been building for years.

He said that Palestinians live in perpetual fear of attacks by Hebron’s settlers, widely known to be among the most aggressive in the occupied West Bank.

There are more than 500 settlers living in a cluster of illegal settlements through the Old City and a further 7,000 in Kiryat Arba, just east of central Hebron.

They live among nearly 200,000 Palestinians, under the protection of a vast Israeli military infrastructure that has carved up the city into Israeli and Palestinian districts.

Sitting outside Youth Against Settlements’ office, Abu Aisheh listened to the ceaseless din of clashes that rose from the Old City’s narrow streets below.

The night before, two Palestinian boys, aged 15 and 17, were shot dead at the edge of Kiryat Arba.

The Israeli army said they were attempting to stab a soldier at a nearby military checkpoint, but a local woman told Youth Against Settlements that the shooting was instigated by a notorious Israeli settler named Ofer Yahana.

Palestinians across Hebron agreed they heard between 50 and 100 gunshots fired. In a city that has been on the brink for years, few were surprised.

Of the 10 Palestinians killed in Hebron since late September, Israel’s army has claimed that nine were attempting to carry out knife attacks when they were shot.

But Abu Aisheh does not believe the army’s account in at least half those cases.

Footage captured by Youth Against Settlements has raised serious questions over the army’s official version of several of the deaths — including that of 18-year-old Hadeel Hashlamon, who appeared to have no knife when she was gunned down at the end of September, and 19-year-old Fadi Qawasmi, who may have had a knife planted on his dead body by Israeli soldiers after he was killed by a settler.

Over the course of years, Hebron’s Palestinian residents have been given little reason to trust their occupying forces.

Youth Against Settlements’ staff and volunteers have been violently attacked by both soldiers and settlers dozens of times. They have been detained and had their equipment confiscated and destroyed.

After releasing the footage filmed after Qawasmi’s death, Israeli forces detained the group’s media coordinator, Ahmad Amro, for more than three hours, erasing all video footage he had at the time and warning him not to film or publish any more material.

Abu Aisheh said that it was dangerous work they performed. “They can shoot you when you are alone, and throw a knife next to you.”

Palestinian mourners carry the body of Hadeel al-Hashlamon, an 18-year old Palestinian woman who was shot by Israeli forces after allegedly trying to stab a soldier, during her funeral in Hebron on September 23, 2015. (AFP/Hazem Bader/File)

Settlers began arriving in Hebron’s Old City in the late 1970s, using armed force to evict Palestinians from their homes.

Abu Aisheh, who was born in 1973, had only been in school two years when the school building was taken over by a group of settlers, forcing the students out.

Before Abu Aisheh even understood the politics of Israel’s occupation, he said he “started to hate the settlers.” He could not understand the extreme inequality, why the soldiers and police seemed to act at the settlers’ command.

He was 21 years old when, in 1994, the US-born Israeli settler, Baruch Goldstein — still revered as a hero among Hebron’s settlers — massacred 29 Palestinians inside the city’s Ibrahimi Mosque.

For a while, it seemed Israeli public opinion had changed, aware at last how grave a mistake it had been to allow the settlers to live in the heart of Hebron. Briefly, there was hope among Palestinians that Israel was going to pull them out.

But instead, the Israeli army began to seal off parts of Hebron’s Old City. The city was segregated, formally divided into Palestinian and Israeli-controlled districts, H1 and H2 — divisions enforced by the army’s checkpoints and guns.

According to Israeli rights group B’Tselem, more than 1,000 Palestinian homes were vacated in the city center and up to 1,829 Palestinian businesses closed. Shuhada Street, the city’s thriving thoroughfare, was emptied.

Israeli soldiers aim their guns at Palestinian youths during clashes in Hebron on October 4, 2015. (AFP/Hazem Bader/File)

The divisions have not been absolute. Living in such close quarters, the two worlds have spilled into one another on a daily basis, often in violence.

Israelis and Palestinians have come to know each other by name when filing complaints against each other at an Israeli police station in Kiryat Arba. The names frequently arise in conversation: Ofer Yahana, Anat Cohen, Baruch Marzel.

Abu Aisheh can recall at one point bringing one of Marzel’s children back to Tel Rumeida settlement after he found him wandering the streets lost.

At a later point, one of Marzel’s relatives violently assaulted the head of Youth Against Settlements, Issa Amro, inside the group’s office, which itself borders Tel Rumeida settlement.

“Young Israelis from Kiryat Arba gathered by the fence and began to throw stones and glass bottles at nearby Palestinian houses, all the while swearing at the inhabitants and calling out racist slurs,” the group reported.

“This latest installment in a longstanding campaign of violence by settlers in Hebron — which lasted five days and received military backing — reflects the ongoing reality of daily life in the city.”

One resident of central Hebron, Muhammad Abu Turki, told Ma’an that tensions had soared in recent days. “Nowadays, it’s very dangerous,” he said. “We have seen many people killed in cold blood for no reason.”

An Israeli Star of David painted on a wall in the West Bank town of Hebron. (MaanImages/Charlie Hoyle/File)

‘Face of the occupation’

While the latest eruption of violence in Hebron has seemed to many unavoidable, international attention has over time drifted from the segregated city.

Abu Aisheh said that the Palestinian Authority should have kept a spotlight on Hebron, bringing international leaders and diplomats there. “When they go to Ramallah, they don’t see the face of the occupation,” he said.

With the PA too weak to protect them, Palestinians in Hebron have found “they must defend themselves,” he said.

A sense of frustration and despair has driven the demonstrations and clashes that have shaken the city nearly every day this month.

Black smoke has risen from burning tires, while the streets are covered in barricades of stones manned by children seeking to keep the settlers out.

The factional lines — normally so pervasive in Palestinian social life — have become blurred at a popular level, said Abu Aisheh. “The people act together on the street.”

He has allowed himself a fleeting hope for the protests — optimistic that they might give rise to a new generation of leaders in touch with the Palestinian people.

But Israel’s bloody response, particularly in Hebron, has left him concerned that there is more violence to come.