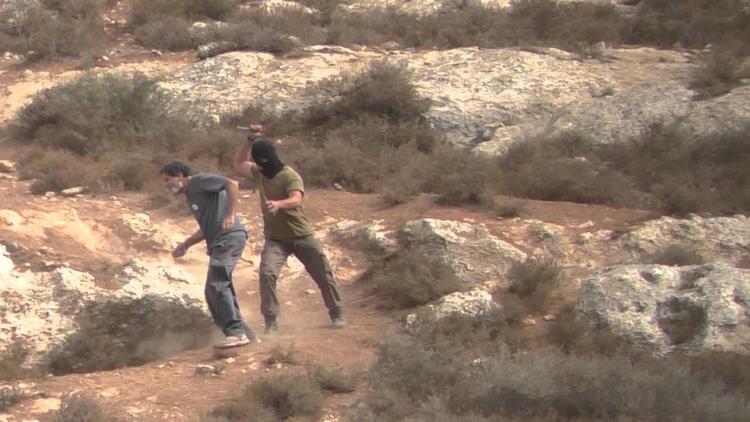 BETHLEHEM (Ma’an) — A Jewish settler on Friday attacked the head of the Israeli group Rabbis for Human Rights during a Palestinian olive harvest in the Nablus district, Israeli media reported.

Head of the group, Rabbi Arik Ascherman, was with a group of Israeli and internationals activists who had visited the area, near the Itamar settlement, to assist with harvesting Palestinian lands.

A video of the incident published on the online 972 magazine shows a masked settler kick, push, and threaten Ascherman with a knife, appearing to attempt to cut him several times.
At one point the Rabbi falls to the ground as the settler grabs him in a headlock, before the masked man runs back up a hill in the area.

Ascherman told Israeli news site Haaretz that he approached the Jewish settler after he saw him attempting to steal olives from a Palestinian orchard.

Israeli police reportedly described the incident as “friction” between left wing and right wing Israeli activists during the olive harvest.

The United Nations Office for the Coordination of Humanitarian Affairs has documented 180 instances of settler-related violence against Palestinians and their property since the start of 2015.

Nearly 90 percent of cases of settler violence investigated by Israeli forces are closed without indictments.