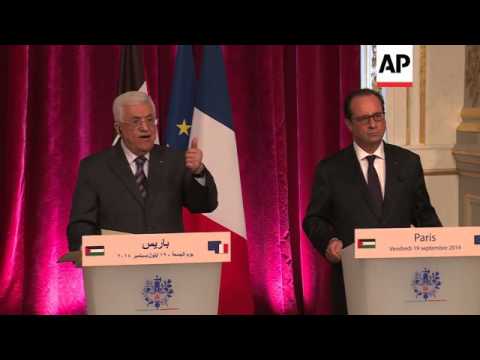 RAMALLAH (Ma’an) — Palestinian president Mahmoud Abbas on Friday expressed his solidarity and sympathy with France in a statement after a series of attacks left over 120 dead in Paris.

Abbas said he stood by the French government and citizens in the face of “terrorism,” adding that the international community was responsible for confronting “terrorist actions.”

Palestinian PM Rami Hamdallah also presented condolences to the families of victims, to France, its government, and citizens.

Hamdallah said such attacks contradict all religions and humanitarian values, and stressed a longstanding relationship between Palestinians and France.

The Palestinian Ministry of Foreign Affairs meanwhile expressed its shock of the “heinous crime” and extended its solidarity with France in the “just war against terrorism.”

Jamal Nazzal, a spokesperson for the Fatah movement in Europe said that the movement also “condemned the terrorist act.”

At least 127 people were reported dead after series of attacks took place in six separate locations in Paris on Friday night, according to French media outlets.

Eight suspects involved in the attacks died, seven of whom were wearing explosive vests, France 24 reported.

The French president declared a state of emergency for the first time since WWII following the attacks.

The [so-called] Islamic State group on Saturday reportedly claimed the attacks as a response to France’s military activity in Syria.

The militant group last month took responsibility for what appeared to be a bombing of a Russian plane that crashed in Egypt’s Sinai Peninsula.