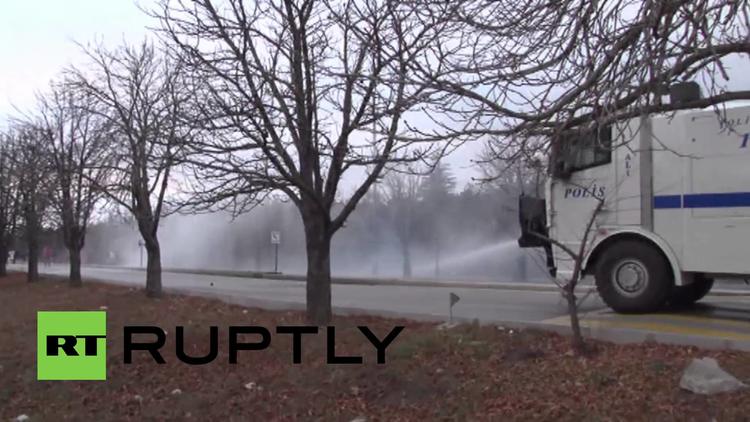 MADRID (IPS) – The last week of November marked another phase of an ongoing shift in the Turkish Government´s approach to human rights issues – Two important events highlighted the ongoing attack freedom of press is suffering in Turkey. First two prominent Turkish journalists were arrested after publishing a story claiming that members of the state intelligence agency had provided weapons to Syrian rebels; second, lawyer and leading human rights defender and Tahir Elçi, President of the Diyarbakir Bar Association in south eastern Turkey, was killed in crossfire while making a press statement on Saturday 28th of November.

The Government´s reaction has fueled concerns about a sweeping media crackdown, which escalated just before the country´s national elections in November 1st. Since the Justice Development Party (AKP) was re-elected, under the leadership of Recep Tayyip Erdoğan, conditions for media freedom have gradually deteriorated even further.

The present government has enacted laws expanding the state´s capacity to control independent media. The government has now an increased authority to block websites and the surveillance capacity of the National Intelligence Organization (MIT) has been strengthened. Journalists are currently facing unprecedented legal obstacles, while courts´ capacity to persecute corruption is circumscribed by references to “national security.” To regulate various media outlets, authorities are making use of the Penal Code, criminal defamation laws and an antiterrorism law.

In 2013, during a corruption scandal revealed through leaks to social media of phone calls implicating ministers and their family members, the Turkish government reacted by shutting down Twitter and YouTube for several weeks and introducing an even more restrictive Internet Law than the one already in existence. However, the internet sites were reopened after the Constitutional Court had ruled against the Government measures.

Cumhuriyet, “The Republic”, is Turkey´s oldest up-market daily newspaper. Since AKP´s rise to power it has distinguished itself for an impartial and occasionally courageous journalism. In 2015 the newspaper was awarded the Freedom of Press Prize by the international NGO Reporters Without Borders for its stand against the Government’s mounting pressure on free speech. Shortly after that, Cumhuriyet’s editor-in-chief, Can Dündar, and the newspaper’s Ankara Bureau Chief Erdem Gül, were arrested and may face life imprisonment for a story claiming that Turkey´s secret services through convoys of trucks across the border were sending arms to Islamist rebels in Syria. Detailed footage depicted trucks allegedly delivering weapons and ammunition to rebels fighting the Syrian president Bashar al-Assad.

Despite its opposition to the Assad government the Turkish government has denied assisting Syrian rebels and by extension contributing to a consolidation of IS. Cumhuriyet’s accusation created a political storm in Turkey, enraging President Erdogan, who declared that the newspaper´s editor-in chief, would “pay a high price” for his “espionage.”

Dündar defended his paper´s action by stating: “We are journalists, not civil servants. Our duty is not to hide the dirty secrets of the state but to hold it accountable on behalf of the people.”
According to the Turkish Interior Ministry, the convoys were actually carrying humanitarian aid to the Turkmen community of neighboring Syria and the Cumhuriyet articles were accordingly politically motivated defamation. Right before appearing in court Dündar declared: “We come here to defend journalism. We come here to defend the right of the public to obtain news and their right to know whether their government is feeding them lies. We come here to demonstrate and to prove that governments cannot engage in illegal activities and defend such acts.”

The Secretary General of Reporters without Borders, Christophe Deloire, stated that “if these two journalists are imprisoned, it will be further evidence that Turkish authorities are ready to use methods worthy of a bygone age in order to suppress independent journalism in Turkey.”

Reporters without Borders, ranks Turkey as the 149th nation out of 180 when it comes to freedom of press, denouncing that there is a “dangerous surge in censorship” in the country. Reporters without Borders has urged the judge hearing the case to dismiss the charges against the two journalists as a case of “political persecution.”

The arrest of the two journalists has caused distress within the European Union. Europe is currently struggling with social problems and political crises due the influx of Syrian refugees and needs Ankara´s help to solve the crisis. Nevertheless, Turkish journalists have urged the EU to avoid making any compromises and in the name of freedom of speech, and as part of the efforts to combat the threat of IS totalitarianism, EU has to react to the Turkish Government´s intentions to control and manage independent information and reporting.

In the case of the lawyer, Tahir Elçi, was speaking to the press, pleading for an end of the violence between nationalist Kurds and the Turkish security forces. His death, considered an assassination by many, has f escalated tensions in Turkey´s Kurd dominated regions, where curfews have been imposed in several communities.

While Elçi, and other lawyers in the south eastern province of Diyarbakır were denouncing the damage caused to the historical patrimony during combat between the YDG-H Militants—a group related to the armed Kurdish group PKK—and the police. The incident was confusing. Video footage shows Elçi, hiding behind a man holding a pistol, as the sound of gunfire rings out from both ends of the street, a moment later the lawyer is seen lying face down on the ground. Officially it was claimed that Kurdish militants opened fire, which was returned by security men. Elçi´s last words before the attack had been: “We do not want guns, clashes or operations here.”

The HDP (People´s Democratic Party), an opposition party with Kurdish origins, declared that Elçi´s death was a planned attack and blamed the ruling AKP party. “This planned assassination targeted law and justice through Tahir Elci. … Tahir Elci was targeted by the AKP rule and its media and a lynching campaign was launched against him.” The HDP did not hesitate to remind that on October 19th, a warrant was issued against Elçi charging him with “propaganda for a terror organization.” The reason was that he during a CNN television program had stated that “PKK is not a terrorist organization… Although some of its actions have the nature of terror, the PKK is an armed political movement.”

Turkey´s Prime Minister, Ahmet Davutoglu, declared that it was unclear whether Elci was caught in a crossfire, or was assassinated, though he stated that: “The target is Turkey. It’s an attack on peace and harmony in Turkey.” On the same note Erdogan said the shooting was a clear indication that Turkey was right in “its determination to fight terrorism.”