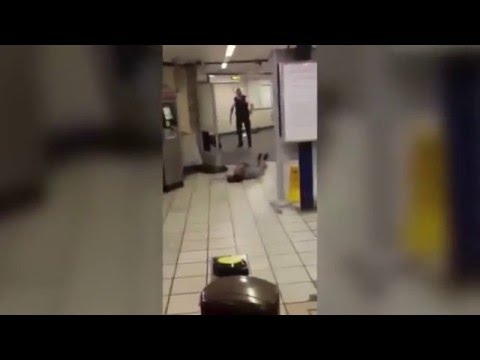 With anti-Muslim and xenophobic sentiment on the rise in the wake of Paris attacks, social media hashtag aims to pushback against reactionary blame game

The scene of the attack that took place inside the Tube terminal in London on Saturday. (Photo: Reuters/Neil Hall)

Though notable to some for exposing the profound difference between how UK police officers respond to a single individual wielding a knife as compared to their American counterparts, a violent attack in London’s Tube on Saturday night has also spawned an emerging social media hashtag which seeks to combat the reactionary display of Islamaphobic rhetoric seen rising across Europe and the U.S. in recent years.

As the Guardian reports Sunday:

It was the spontaneous putdown of the knife attacker that captured public feeling about the assault in Leytonstone underground station: “You ain’t no Muslim bruv.”

They were the words of a shocked onlooker, filmed on a mobile phone as police pinned the man to the floor after he was Tasered. The knife attacker had injured two people, one man seriously, before reportedly saying: “This is for Syria.”

The witness’s phrase quickly spread as people used #youaintnomuslimbruv to show their contempt for the suspected London tube station terrorist.

Though the man was detained by police and all victims are believed likely to survive, the comments by the unidentified onlooker went viral. As of Sunday, the hashtag was the leading trending topic in the UK with many Muslims, as the New York Times notes, “retweeting the sentiment with approval” on Twitter.

Watch the scene as it unfolds (Warning: Some may find this footage disturbing):

Jay Khan, 20, a taxi dispatcher opposite the tube station, told the Guardian he feared the attack would increase anti-Muslim feeling. “When these things happen there is so much stuff on social media blaming Muslims and all that,” he told the newspaper.

As VICE News reported Saturday, the reported number of hates crimes against Muslims has tripled since the attacks in Paris on November 13, including assaults against individuals and the targeting of mosques with vandalism, and in one case on Friday, an attempted fire-bombing.

Last week, the British parliament—despite widespread protest by anti-war voices—voted to approve the bombing of Syria and escalate its campaign in Iraq against members of the militant organization which calls itself the Islamic State.

Though the Times reports that some people have been critical of the hashtag, most of the social media commentary “about the unknown bystander — presumed by many to be a Muslim himself — was laudatory.”

Love the onlooker yelling “you aint no Muslim, bruv” as London terrorist gets handcuffed https://t.co/9R1ZVzxb6N

#YouAintNoMuslimBruv If you are a terrorist, you arent a muslim, a christian, a hindu or a buddhist. No religion promotes violence

The hashtag—though with an increasing number of people using it for opposite or negative purposes—continued to trend both in the UK and worldwide on Sunday: