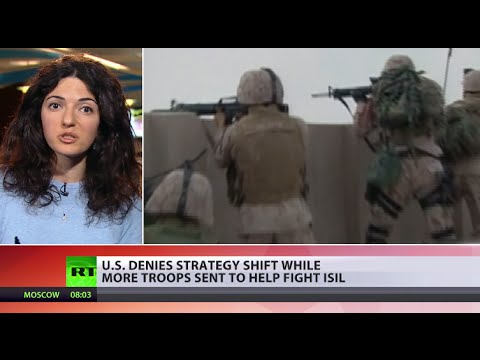 The spreading influence of ISIS is forcing Washington into a strategic decision: escalate.

Suddenly, and without almost anyone noticing, the war against ISIS in Syria and Iraq is developing and growing rapidly. Some elements are already clear enough: they include the expansion of ISIS-controlled territory in Libya, the attacks in Paris and California, the increasing involvement of Russia, and the decision of the British parliament to authorise UK air-attacks in Syria.

Those are all significant changes. But they are decidedly less important than another development, one that resonates with the experience in the early days of the Iraq war in April 2003.

That war had started on 20-21 March. Within three weeks, United States marines and army units had got to Baghdad and the Saddam Hussein regime had collapsed; three more weeks, and President George W Bush could don a flying-jacket and jet out to the USS Abraham Lincoln to give his confident “mission accomplished” speech from the carrier’s flight-deck.

True, there was at the time looting and disorder in Baghdad, and early indications of a revolt. But the expectation was that peace would be restored, Iraq would make a successful transition to a pro-western state, and most of the coalition troops would leave within months.

Already, though, something different seemed to be happening, with reports in the US media that the Pentagon was planning to establish four large bases for airforce and army units, with every intention that these would at least be long-term projects and quite possibly permanent (see “Permanent occupation?”, 24 April 2003)  Now it was becoming clear what the Bush administration was about: a military operation that would determine US influence across the region for many years to come.

Fast forward to late 2015, and any talk of a major expansion of the US presence in the region is again quickly discounted. The main reason is the Obama administration’s evident caution about entering a ground war in Iraq and Syria. That judgment, though, needs a rethink – and at two quite different levels.

The first and most immediate follows news of two very recent developments. One is the decision to deploy a “specialized expeditionary targeting force”, intended “to ratchet up pressure on the Islamic State by using a small group of special operations troops – possibly fewer than 100 – to more aggressively use intelligence information, to include capturing and killing the group’s leaders. In theory this would generate even more and better intelligence, feeding what the military calls a ‘virtuous cycle’ of intelligence-driven air and ground operations.” Such a prospect is remarkably similar to the violent “shadow war” in Iraq from 2004-08, conducted by Task Force 145. It was credited with stemming the insurgency – but also with leading directly to the rise of ISIS.

The other development is that the Pentagon, as reported in the Military Times, is now prepared to commit helicopter-gunships and combat-troops (the latter euphemistically termed forward-based military “advisers”) in order to aid the Iraqi army as it tries at last to retake Ramadi, the capital of Anbar province.

Ramadi is defended only by 600-1,000 ISIS paramilitaries, yet close to 10,000 Iraqi army personnel and militias have been trying to take the city since August 2015 in an operation originally expected to last a month at most. That it is taking so long is yet one more indication that ISIS is proving to be hugely more resilient than expected, which has led to frequent comments from Pentagon insiders that the movement cannot be defeated without “boots on the ground”.

This is the long-anticipated “mission creep”, suggested in these columns (and by other analysts) over the past few months (see, for example, “America and Islamic State: mission creeping?“, 21 August 2014). Yet even this is not the main story. That concerns very recent information that the entire war is about to take a new and far more complex direction, with a significance that may stretch many years if not decades ahead.

The past as prelude

At root is the evolving analysis that it is not only that ISIS cannot be defeated in an air war alone but that the movement is now expanding well beyond Iraq and Syria. The implication is that the United States needs to expand its existing set of bases – stretching from Spain to Afghanistan and from Italy to sub-Saharan Africa – in order to counter an ISIS-rooted entity that now comprises eight or more militant groups.

Some, such as the proto-caliphate in Sirte on Libya’s Mediterranean coast, are essentially part of ISIS, as is the movement in Yemen that killed the governor of Aden on 6 December.  Others, such as Nigeria’s Boko Haram and allied groups in Mali and Niger, may have looser connections, but all are now seen as part of a much wider phenomenon that is growing in potency.

The context here is striking. ISIS has reportedly had 20,000 supporters killed by coalition airstrikes since August 2014 while doubling the number of recruits from other countries from 15,000 to 30,000 (see “ISIS’s plan, and the west’s trap“, 27 November 2015).

Washington’s proposal, which is still being developed, will involve the further expansion of four existing bases into “hubs”. They include one at Djibouti on the Horn of Africa and another in Iraq (possibly at Erbil in the Kurdish region). Elsewhere in sub-Saharan Africa, the Middle East and southwest Asia, numerous small facilities will either be expanded or started from scratch, with countries such as Ethiopia, Cameroon, Burkino Faso and Niger playing host.

These will involve the basing of special forces across the wider region on a regular basis in an operation described by defence secretary Ashton Carter (in a little-reported speech on 29 October) as “essential”. He said: “Because we cannot predict the future, these regional nodes – from Moron, Spain to Jalalabad, Afghanistan – will provide forward presence to respond to a range of crises, terrorist and other kinds. These will enable unilateral crisis response, counterterror operations, or strikes on high-value targets.”

The key word here is “unilateral”: an indication of the determination of the United States, even under the otherwise cautious Obama administration, to respond to what it now sees as a near-worldwide crisis and a direct threat to US global power.

This is only the proposal as it stands: it does not encompass the possible effects of more catastrophic attacks such as the ones in Paris. Nor does it take in the impact of the successor in the White House in 14 months time, who will almost certainly be a lot more hawkish than Barack Obama.

The House of Commons in London voted overwhelmingly on 1 December to expand Britain’s involvement in the war in Syria. Perhaps some of those members of parliament may soon start to reflect on just what it is they have agreed to. It may even be that the Labour leader, Jeremy Corbyn’s opposition to the war could turn out to be far more prescient than almost anyone yet realises. The precedent of May 2003, when Tony Blair’s government believed that the Iraq war would be over in weeks, or at most months, will escape no one. Least of all the fighters and strategists of ISIS.

RT: “‘No American boots in Syria’ failed: US go on sending troops to Iraq & Syria”