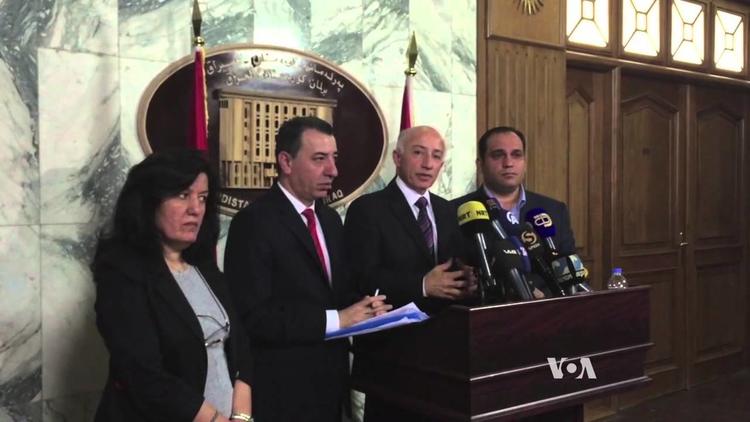 In an interview, Raad Jabar al-Khamis, a representative of the Christian Sabean-Mandaean minority, talks about why all minorities in Iraq will leave the country over the next decade.

Raad Jabar al-Khamis has held many senior political positions on behalf of Iraq’s Sabean-Mandaean minority. The Sabean-Mandaeans are a tiny Christian minority in Iraq, characterised by ancient rituals that cross between Christianity and Islam. Despite the fact that this minority has been able to secure one of the quota seats, dedicated specially to the country’s minorities, in Iraq’s Parliament, al-Khamis says that this is largely symbolic and that Mandaeans have no real political power thanks to power sharing deals between the country’s larger ethnic and sectarian groups. As it is, it probably doesn’t matter anyway, he says. The way things are going all members of Iraq’s minorities, and especially the Christian ones like his, will have left the country during the next decade.

NIQASH: The Mandaeans are well known for running the minority’s affairs in a particularly democratic way. Can you tell us more about this?

Raad Jabar al-Khamis: This is true. In fact, we have three different leadership organisations. These are the Mandaean Spiritual Council , the Mandaean General Assembly and the Community Affairs Council. All of these were originally formed in the 1980s and each one represents the different social groups within the minority. For example, the Spiritual Council is composed of clergy and headed by the Mandaeans’ spiritual leader, Satar Jabar Helo. Meanwhile the General Assembly represents members of all the different family groups or tribes and these representatives have been elected by their own families. This council is like the Mandaeans’ own Parliament, of sorts. And finally the Community Affairs Council is another kind of authority, with members coming from the General Assembly. This body manages the more general, custodial affairs of all Mandaeans

Many religious and social leaders have already left Iraq. That makes every other Mandaean want to leave too.

NIQASH: In terms of these democratic processes, how did you end up being elected the Mandaean representative on Baghdad’s provincial council?

Al-Khamis: We hold other internal elections inside our community to select the candidates who will take up the special minority quota seats. I competed and won, which is how I got the job as Mandaean representative on Baghdad’s provincial council.

NIQASH: It doesn’t seem like the interests of the Mandaean minority are particularly well represented by any of Iraq’s political parties. Have you thought about starting your own party?

Al-Khamis: We haven’t done this as yet. Some Mandaeans have joined left wing parties, as have members of other Iraqi minorities. But we did start a committee composed of between nine and 15 members, whose job was to try and build bridges and to encourage cooperation with decision makers in other parties, as well as to represent the Mandaean people in any political forums. We believe this fills the political gap.

NIQASH: Do these different groups work together at all?

Al-Khamis: There’s a lot of coordination between the religious leaders and the political committee. The clergy try not to get involved in the details of daily political affairs. Still the religious leaders have an important role to play when it comes to any candidacies. While the final decisions should be made democratically by the Mandaean General Assembly, there’s no doubt that if the clergy accept a candidate this is seen as an endorsement.

NIQASH: The Mandaeans have had a quota seat – one that is automatically given to a Mandaean politician – in the Iraqi Parliament for several elections now. How do you feel about the minority’s participation in Iraqi politics?

Al-Khamis: In reality our participation is symbolic. It has no significant political weight and there is no real or active participation in the political process. The Mandaeans are not represented in any of Iraq’s federal ministries, we don’t even have one general manager. The only high-ranking position we can get is as the general manager of the endowment for Christians, Yazidis and Mandaeans [the body taking financial care of the minorities’ religious buildings]. This is really disturbing because the Mandaeans are one of the oldest religious groups in Iraq.

NIQASH: So what would the Mandaeans like to see happening?

Al-Khamis: We would like to participate in the political process without marginalization or exclusion. However the power sharing deals between the major political groups in this country – the Sunni Muslim parties, Shiite Muslim parties and the Iraqi Kurdish – don’t allow minorities to make any real progress or to participate.

Personally I believe that giving Mandaeans responsibility for a service- provision ministry would give us an opportunity to serve our country. But I also think this is impossible at this stage.

NIQASH: What do you think the future holds for Mandaeans in Iraq?

Al-Khamis: In the past we were just worried that all Mandaeans would leave Iraq. But now we think that Iraq will actually lose all of its minority groups within the space of ten years – and ten years is optimistic. Many Mandaeans have already left the country and this includes religious and social leaders. That makes every other Mandaean want to leave too. Immigration is no longer a matter of choice. It is an inevitable reality.