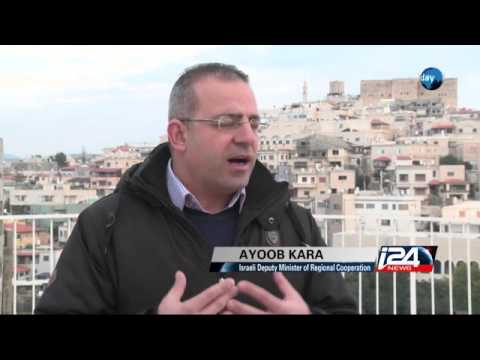 BETHLEHEM (Ma’an) — A plan approved by Israel’s cabinet last week to provide half a billion dollars worth of assistance to Israel’s Druze and Circassian minorities has been denounced by leaders of Israel’s Palestinian community as a “divide and conquer” tactic.

Israeli Prime Minister Benjamin Netanyahu announced the 2 billion shekel ($510 million) multi-year plan “for the development of the Druze and Circassian communities” at the start of the weekly cabinet meeting on Sunday.

The plans followed the earlier announcement of a 15 billion shekel ($3.8 billion) five-year plan to address the gaps in access to infrastructure and discrepancies in rights between Palestinians with Israeli citizenship and their Jewish counterparts.

While it was not initially clear whether the assistance to the Druze and Circassian communities was included in this larger plan, Netanyahu warned separately on Sunday that the larger plan for the development of other “Arab communities” was dependent on the implementation of a law enforcement plan alongside it.

“I want to make it clear that nothing that has been done in various areas — infrastructure, tourism, education, trade, economy — can move forward if we do not address the question of enforcing the laws of the state of Israel in the Arab sector,” the prime minister said.

The further security measures proposed by Netanyahu would target Palestinian citizens of Israel — who represent an estimated 20 percent of the Israeli population — but would, critics say, do so unequally.

Palestinian communities in Israel recently came under intense scrutiny from Israel’s security forces after a Palestinian with Israeli citizenship, Nashat Melhem, allegedly killed two Israelis at a Tel Aviv cafe on Jan. 1, before killing a Palestinian citizen of Israel as he fled the scene.

Melhem was killed in a shootout with Israeli forces on Jan. 8 in his hometown of Arara in northern Israel.

Jafar Farah, the director of the Mossawa Advocacy Center For Arab Citizens In Israel, told Ma’an at the time that there had been a high level of incitement against Palestinians with Israeli citizenship on the part of Israeli government officials.

“The atmosphere right now is very heavy and racist — there is a lot of incitement against Arabs,” Farah said. “We know that in these circumstances there is no authority willing to intervene in the media to do anything other than support the (crackdown).”

“This is a period where the extreme right wing is trying to prove that the occupation is not the problem, but the relationship between Jewish and Arab communities is.”

Farah’s sentiments were echoed by Aida Touma-Suleiman, a member of the Israeli’s Knesset representing the left-wing Hadash party of the Arab Joint List coalition, who sees the Israeli government’s recent funding plans as reflective of its discriminatory policy.

Touma-Suleiman slammed the government’s intention to tie development aid for Palestinian communities to law enforcement as an attempt “to create conditioned citizenship.”

This “conditioned citizenship,” she said, was being carried out by the Israeli government with the aim of creating divisions among Palestinians in Israel.

“This has been a tactic from different Israeli governments, even those who claim they are from the left,” she told Ma’an.

“They try to divide and conquer us, either based on geographical locations, religious affiliations, and now between good Arabs and bad Arabs. Those who obey the government, who serve in the military, will benefit from the plan, and those who refuse the government’s oppression will not.

“We are used to the attempted fragmentation of the community, and we’ll always stand against it,” she said.

A picture taken from the Israeli-annexed Golan Heights shows Druze men residing in Israel watching smoke rise in the horizon in the Syrian Druze village of Hader, on June 16, 2015. (AFP / Jalaa Marey, File)

These legal distinctions have been criticized by many, including MK Abdullah Abu Maruf, as an attempt to divide the Palestinian population inside Israel.

Abu Maruf, a Palestinian citizen of Israel and, like Touma-Suleiman, a member of the Hadash party, told Ma’an that Israel’s plan — which he said would actually only amount to 1.2 billion shekels — was an attempt to sow divisions among Israel’s Palestinian minorities through preferential treatment.

“As an Arab citizen and a member of Knesset I never oppose allocation of money to the Arab citizens, but we are against a political process of discrimination,” the MK said.

“All members of the Joint List view this plan in the same way,” he added. “We consider it a ‘divide and conquer’ policy. It’s a continuation of the systematic Israeli government policy towards Arabs in Israel.”

Abu Maruf noted that a similar plan to allocate funds to the Druze and Circassian communities was approved by the Israeli cabinet in late 2014, although he pointed out that only 10 percent of the 185 million shekel project had been allocated so far.

A Druze himself, he further pointed to the small size of the Druze and Circassian communities in Israel, which total around 130,000 and 4,000 respectively.

“With all due respect, this is a small number and the Israelis are using this to talk about minorities and enact discriminatory policies,” Abu Maruf said.

‘The rights we deserve’

This is not the only initiative since the beginning of the year to explicitly benefit the two communities. On Jan. 5, less than a week earlier, the Israeli National Planning and Building Council approved an initiative presented by Netanyahu to “build a new Druze town” near the northern town of Tiberias, a press release from the Israeli Prime Minister’s office revealed at the time.

“I ascribe great importance to the establishment of a new Druze town that will advance the Druze sector,” Netanyahu said following the announcement. “The Druze community has bound its fate to the State of Israel.”

According to rights organization Adalah, there are at least 76 Israeli laws that discriminate between Jewish and Palestinian citizens of Israel.

A 2011 report by the organization stated that “Arab municipalities exercis[ed] jurisdiction over only 2.5 percent of the total area of the state,” adding that no new Palestinian towns had been built in Israel since 1948, compared to 600 Jewish municipalities. Infrastructure in Palestinian-majority towns is notoriously inadequately maintained, and access to public transportation is insufficient.

“This plan is not a favor from anybody, it is only a small part of the rights we deserve,” Touma-Suleiman said.

“We are also worried of the political use of this plan against us,” she added. “Netanyahu’s government needs this plan for international reasons, in order to build an image of Israel as a democratic state at a time when there is international criticism of Israeli policies.”

“Even if this plan is not implemented later on, it will still look like the government is looking after its Arab citizens.”