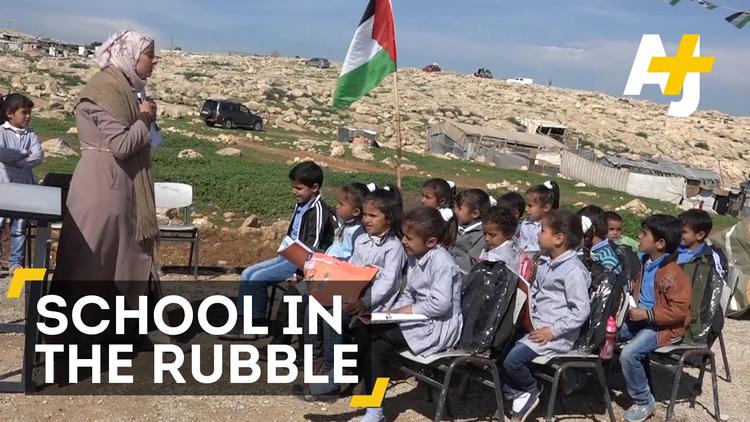 The almost unbearable stench of the dump fades for a moment when Musa Tarabin puts freshly ground coffee into a pot of water boiling over open coals. Tarabin lives in a tiny Bedouin village in Israel’s south located right next to a landfill, its mountain of rubbish and scavenging birds looming behind.

“The stench wakes us up in the middle of the night,” said Tarabin, a 52-year-old father of seven.

The grim conditions are a stark example of the land disputes between Israel and Bedouins, Arab citizens of the country who usually live in the Negev desert.

Tarabin tribal members say they were moved by Israel in 1956 to their current location, a patch of land in the Negev flanked on one side by fences of the Dudaim dump, created in the early 1990s.

Israel insists their presence there is illegal, and efforts to relocate the Tarabins have so far failed.

“It used to be fun to live here,” said Tarabin. “The Israeli authorities need to figure things out.”

The predicament highlights controversy over Israel’s attempts to regulate and finalise arrangements for the historically nomadic Bedouins.

A spokeswoman for the Authority for Development and Settlement of the Bedouin in the Negev confirmed the Tarabins had been living at the Dudaim site prior to the dump.

But she stressed the presence of the 40 families there was illegal and the Tarabins were considered “trespassers on state land”, pointing to a number of court rulings to that effect.

The authority is tasked with forming new Bedouin communities and expanding existing ones for inhabitants of “unrecognised” and hence illegal villages.

They receive compensation in return for moving.

The spokeswoman noted the Tarabins had over the years received a variety of offers to relocate, but “unfortunately not all of the Tarabins are cooperating with the authorities in talks on permanent residency”.

To Juma Qadi, a member of the Tarabin tribe living a few hundred metres (yards) from the Dudaim fence, feuds among his Bedouin brethren are the reason they have not relocated.

“We need to work things out amongst ourselves first,” he said, relaying his efforts to coordinate a deal between his Tarabin relatives and Israel that he said were ultimately torpedoed due to “internal conflicts and jealousy”.

Around 230,000 Bedouins live in Israel’s south, including 90,000 in “unrecognised areas”, according to official data.

Those in such areas normally have no infrastructure and supply their own water and electricity, but those difficulties are less of an issue for the Tarabins near Dudaim.

Musa Tarabin and other men who gathered in his shack alleged there was a high mortality rate among their families from lung cancer, which they attribute to the asbestos treated in the dump.

The Environmental Protection Ministry said: “The asbestos received at the site is received and treated in such a way that its fibres cannot be spread to the surroundings, and therefore there were no regulations regarding the distances between the asbestos in the site and settlements.”

Dudaim’s CEO Ido Rubinstein said there was no risk from dangerous materials of any kind in the dump, but agreed no one should be exposed to the stench.

“We believe decent solutions should be found. There’s no reason for people to live so close to a dump,” he said.

On a small hill near the Dudaim fence, Salem Tarabin, in his mid-twenties, has been building a new home with the help of a cousin, Ouda.

Ouda Tarabin is something of a local celebrity.

He was arrested while visiting his sisters in Egypt in 2000 and spent 15 years in prison on charges of spying for Israel.

He was released in December and welcomed upon his return by Israeli Prime Minister Benjamin Netanyahu.

“When I left, there was nothing,” Ouda said, gesturing towards the dump. “Now there’s a mountain.”