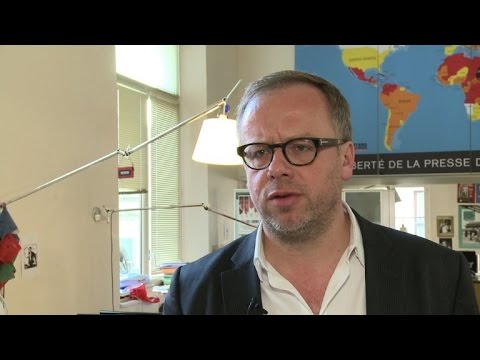 A leading journalism advocacy group says media freedom experienced a sharp decline around the world over the past year, citing increasing government restrictions in places like Turkey, Poland, Tajikistan, and Egypt.

In its 2016 World Press Freedom Index released on April 20, Reporters Without Borders said that there had been a “deep and disturbing” decline in freedom of information in many places around the world.

“Throughout the world, ‘oligarchs’ are buying up media outlets and are exercising pressure that compounds the pressure already coming from governments,” the Paris-based group said.

The organization put Finland, the Netherlands, Norway, Denmark, and New Zealand at the top of its annual ranking of press freedom around the world. At the bottom were China, Syria, Turkmenistan, North Korea, and Eritrea.

One of the countries that fell the most since 2015 was Tajikistan, where RSF said President Emomali Rahmon used counterterrorism measures to silence dissent.

Poland also fell 29 places, due to a new law passed in January that gave the new conservative government tighter control over state media.

Incidents of governments physically impeding access to media outlets increased by 16 percent between 2013 and 2016, according to the group’s “infrastructure” indicator. That includes governments blocking Internet access and destroying broadcast equipment and printing presses.

Other tools increasingly being used by governments to impede independent reporting include laws forbidding, for example, “insulting the president” or “supporting terrorism,” the group said.

“Growing self-censorship is the knock-on effect of this alarming situation,” it said.