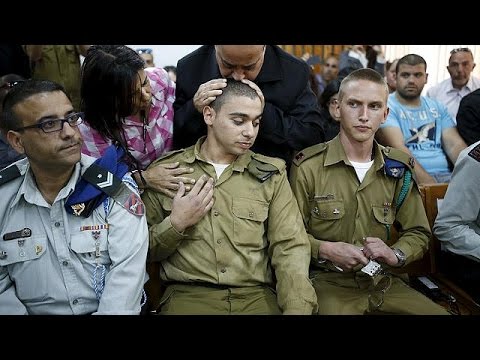 BETHLEHEM (Ma’an) — The trial of an Israeli soldier charged with manslaughter for the point-blank shooting of a Palestinian earlier this year began on Monday, amid Palestinian fears that the accused would evade meaningful legal consequences for his actions.

A panel of judges read the indictment to Elor Azarya, who was caught on camera by Israeli rights group B’Tselem in March killing Abd al-Fattah Yusri al-Sharif, 21, with a shot to the head as the young Palestinian was lying wounded on the ground after allegedly stabbing an Israeli soldier, sparking outrage over what Palestinian rights advocates called an extrajudicial execution.

The head of the judicial panel at the Jaffa military court suggested that the case resort to mediation instead of a full-on trial, a proposal which the prosecution seemed inclined to reject on Monday, Israeli newspaper Haaretz reported.

Meanwhile, the president of the court Maya Heller and judges Carmel Wahabi and Yogev Yifrach reportedly urged the defense and the prosecution to seek out a plea bargain in the coming week, Ynet wrote.

An autopsy in April confirmed that al-Sharif was still alive before a bullet fired at his head at point-blank range by Azarya killed him.

Al-Sharif’s family announced in April that they would file legal procedures against the Israeli army in front of an Israeli court, not long after Azarya was moved into open detention on a military base.

“We are concerned this killing may not be a lone incident,” UN High Commissioner for Human Rights, Rupert Colville said in a statement in April, adding that “all incidents where security forces have caused death or injury should be fully investigated, and those responsible brought to account.”

Despite his initial condemnation of the killing, Israeli Prime Minister Benjamin Netanyahu later backtracked under pressure from Israel’s prominent right-wing political community, who claim that Azarya should be found innocent of all charges.

Rights groups have repeatedly criticized Israel for offering impunity to Israelis who harm Palestinians, or for handing down very light sentences.

The unrest has been marked by a surge of small-scale attacks carried out by Palestinian individuals — predominantly on Israeli military targets — which have left nearly 30 Israelis dead, with the majority of suspected Palestinian attackers shot dead on sight.