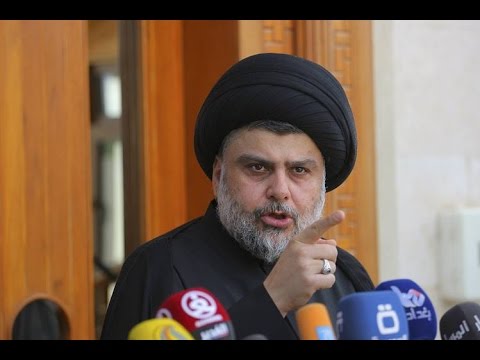 Protests and suicide bombings have caused tension within the Shiite Muslim alliance that’s been fighting extremists. As neighbourhoods are taken over by militias, locals fear intra-sectarian fighting.

Abu Fatima al-Budairi is a member of the powerful Badr Organization, one of the largest Shiite Muslim militias in Iraq. And he used to be proud of his membership of the group, which has been integral in fighting the extremist group known as the Islamic State, but which has also been controversial in some cases.

However al-Budairi lives in Baghdad’s Sadr City neighbourhood in the east of the Iraqi capital. And in this neighbourhood another Shiite Muslim militia is in control, the Peace Brigades, part of the Sadrist Movement led by the cleric Muqtada al-Sadr. Although the Peace Brigades have also fought against the Islamic State, or IS, group, recent conflicts between the two militias has seen tensions between them rise. And it means that al-Budairi can no longer boast about his allegiance to the Badr organization when he’s at home. It’s too dangerous.

The same is true of members of the Sadrist Movement who live in areas like Karrada which is under the control of the Badr organisation.

Both groups say they are afraid the militia in control of their neighbourhood will want to take revenge for slights that the others believe have been committed against them.

Different Shiite Muslim militias control different parts of Baghdad – but some street corners are still the site of power struggles.

In fact, whether they are associated with one or other militia or not, the people of Baghdad are increasingly afraid that fighting could break out between the different Shiite groups at any time.

As one local man told NIQASH, “there seem to be dozens of armed fighters deploying in our streets but we have no idea which group they belong to. We are really worried they’re about to start fighting one another”.

Different Shiite Muslim militias currently control security in different parts of Baghdad. Sadr City is under the control of the Sadrists, Karrada is controlled by the Badr organization, then Baladiyat, Mahmudiyah and Wishwash belong to the League of the Righteous. However other Shiite-dominated neighbourhoods like Bayaa, Shula, Abu Dashir, Hurriyah and Shaab are not under the control of any specific militia – which means there are ongoing power struggles over which street corner belongs to which group.

It is almost two years since Iraq’s highest religious authority, Ali al-Sistani, issued a decree telling Iraqis they should unite to fight the threat presented by the Islamic State group. And although most of the various Shiite Muslim factions did unite against the Sunni Muslim extremists, recently the various alliances within the Shiite Muslim militia and political sector have been fracturing. It seems that the unity that developed between the various Shiite Muslim factions due to the emergence of a common enemy is starting to fade as power and politics begin to take precedence again.

The most recent problems began with the demonstrations coordinated by the Sadrists, against political corruption. These peaked about a fortnight ago when the protestors broke into the capital’s highly protected Green Zone, where most of Iraq’s senior politicians live, along with foreign diplomats.

However other Shiite Muslim political factions and militias didn’t participate in these demonstrations or the vandalism in the Green Zone. Shortly after the Sadrist-associated protestors left the Green Zone, hundreds of fighters from other militias –including the Badr organization and the Khorasani Brigades – were stationed in various places around the capital, including the Green Zone, to maintain security.

Hakim al-Zameli, an MP and a senior member of the Sadrist group, asked other groups not to interfere in politics and warned them not to attack the protestors. But those other groups quickly accused the Sadrists of making use of the protests for their own political gain.

Especially after some of the Sadr-affiliated protestors broke into the Diyala offices of the Dawa Party, to which both the present and former Prime Ministers, as well as Hadi al-Ameri, who leads the Badr organisation, belong. Protestors also stormed the offices of other Shiite Muslim political parties and damaged the pictures of the parties’ leaders that were hanging there.

Since then the leaders of the various Shiite Muslim organisations have been trading accusations and criticisms. And the recent spate of suicide bombings in Baghdad which resulted in over 100 dead also made things worse.

Sadrist MP, al-Zameli, who heads the Iraqi Parliament’s National Security and Defence Committee, was critical of the work of the Ministry of the Interior in keeping Baghdad safe and only hours later there was another Sadrist-affiliated protest, during which protestors demanded that the Minister of the Interior, Mohammed Salem al-Ghabban, resign.

It just so happens that al-Ghabban is a member of the Badr organization. So of course, Badr group members responded by saying that the Sadrists were only attacking the Minister because of his political affiliation, not because he had done a bad job.

In fact, this conflict between the various Shiite factions is not something new in Iraq. Similar scraps happened around 2008, when the Sadrists clashed with the Badr organization in southern Iraq, and again in 2011 and 2012, when the Sadrists got into fights with one of the more extremist Shiite militias, the League of the Righteous.

Some have suggested that underlying these tensions is a split in Iraq’s Shiite groups, between those who are more loyal to Iran and those who feel strongly about Iraqi sovereignty.

“The conflict between the Sadrist movement and the Shiite factions [like the Badr organization] who are loyal to Iran stems from an ideological argument that has been going on for decades,” says Jabr al-Mohammedawi, an independent Shiite Muslim cleric who teaches theology in Najaf, in southern Iraq. The Sadrists are opposed to the idea of the clergy interfering in matters of state whereas the groups closer to Iran prefer the Iranian way, known as the Wilayat al-Faqih, or “Guardianship of the Jurist” in English. Basically disagreements about this subject centre on how much control the religious leaders in a country should have over the politics of that country. Should they be involved in all matters pertaining to ruling the country? Or only certain, more appropriate ones?

The Sadrists believe the Wilayat al-Faqih idea was imported from Iran. The Sadrist movement itself was born inside Iraq, and was created by Iraqis, most of who lived inside the country, even under Saddam Hussein, who treated the country’s Shia so badly. A lot of the other leaders of Shiite Muslim groups lived outside the country while Saddam Hussein was in power, some of them in Iran where they developed closer ties with the Iranian leadership. In Iraq, the Badr organisation is strongly linked with Iran’s leadership as are several other prominent Shiite militias like the League of the Righteous, Hezbollah in Iraq and the Khorasani Brigades .

There is another suspected reason for the growing tensions between the Shiite Muslim groups, after two relatively calm years of both direct and indirect cooperation. Iraq’s next provincial elections will be held in 2017 and many believe that tensions will just increase as the date for voting comes closer.

Usually what happens in Iraq’s provincial elections is that the Shiite political parties, most of which now have military wings or associated militias, compete with one another in the southern provinces with a predominantly Shiite population – that is Karbala, Najaf, Babel, Wasit, Diwaniya, Samawa, Nasiriyah, Basra and Muthanna. They also compete for votes with other parties in three provinces with more mixed demographics, Baghdad, Diyala, and Salahaddin.

The upcoming provincial elections will be an even tougher fight than usual. Many of the Shiite Muslim militias have become very popular because locals have seen them fighting the IS group and consider them heroes.

Although the Iraqi government has tried to rein the militias in, they have remained independent and in some cases, have refused to do what the Iraqi government has told them. And although they do not seem to be prepared to admit it, there’s no doubt that many of the leaders of the militias have political ambitions; rumour has it some have already started negotiating new alliances in secret in preparation for the elections. For example, Hadi al-Ameri was actually a former Minister of Transportation but since the beginning of the security crisis, he has re-fashioned his image as a military commander.

“There’s no doubt that the Shiite Muslim volunteer militias will seek representation in the next elections,” al-Mohammedawi says. “And they will win large victories because they control different neighbourhoods and towns and their members live among the people.”