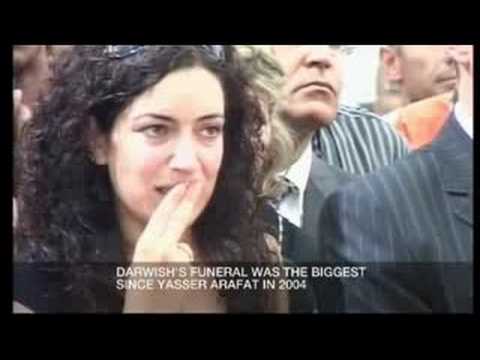 On Tuesday, Israeli army radio broadcast works by the iconic Palestinian writer as part of its “University on Air” program, including Darwish’s famous poem “Identity Card,” which drew the ire of Lieberman and other Israeli officials.

Ma’an News Agency reports that, in a meeting with Army Radio chief Yaron Dekel, Lieberman said that broadcasting the poem contravened the station’s mission to “strengthen solidarity in society, not to deepen rifts, and certainly not to offend public sensibilities.”

Lieberman added that Darwish’s poems could not “be part of the Israeli narrative program” aired on the station, adding: “By that same logic, we can also add to the Israeli narrative Mufti al-Husseini, or broadcast a glorification of the literary merits of ‘Mein Kampf,’” referring to the Grand Mufti of Jerusalem in the 1920s and 1930s — whom Israeli Prime Minister Benjamin Netanyahu controversially blamed in October for the Jewish holocaust.

“Identity Card,” written in 1964, details the indignities of life subjected to the bureaucracy of the Israeli occupation, and includes the lines “I do not hate people/Nor do I encroach/But if I become hungry/The usurper’s flesh will be my food,” presumably the part targeted by Lieberman.

According to the Ministry of Defense statement, Lieberman said that there was “a big difference between freedom of expression and freedom of incitement.”

Israeli newspaper Haaretz reported that Israeli Attorney General Avichai Mendelblit called Lieberman “to remind him he has no authority to intervene in Army Radio’s programming.”

Born in Moldova, Avigdor Lieberman is one of the only foreign ministers in the world who does not live in territory officially recognized as his own country. Originally under suspicion over charges of money-laundering and bribery, Lieberman was formally indicted in December of 2012, on lesser charges of fraud and breach of trust.

His party was recently the focus of a corruption probe within the Israeli political spectrum, and, more recently, Lieberman’s life was threatened with an assassination attempt.

On Wednesday, Israeli Culture Minister Miri Regev called the broadcast of Darwish’s poems “dangerous,” adding that Army Radio “cannot allow itself to glorify the anti-Israel historical tale, as Mahmoud Darwish is not an Israeli, his poems are not Israeli, and they go against the main values of Israeli society.”

Darwish, who died in 2008, is also known as Palestine’s national poet, and stands as one of the most prominent figures of modern Palestinian literature. He has long been criticized by Israeli political figures for his stance against the occupation.