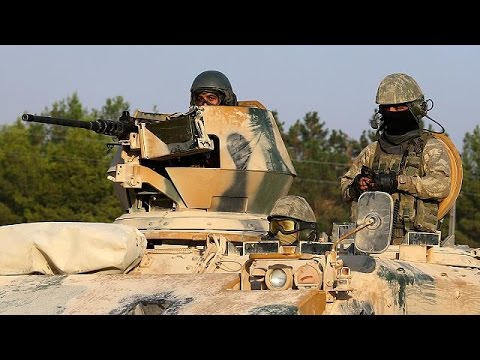 On Sunday evening, Turkish President Tayyip Erdogan told a rally in Gaziantep, a city near the border with Syria, “We will make any kind of contribution to the work to clear Daesh [ISIL] from Syria.” This pledge should have been music to Washington’s ears, since Turkey did virtually nothing about rolling up Daesh from summer of 2014 when it took over 40% of Iraq and some of eastern Syria until about a week ago. Indeed, Daesh benefited from relatively lax Turkish border security, which allowed thousands of fighters to slip into Syria from Turkey and allowed small Syrian traders to market Daesh gasoline and kerosene to villagers on the Turkish side of the border. So Erdogan was announcing an about-face, a determination to end Daesh’s rule of terror.

But then Erdogan continued, “On the issue of the PYD terror group we have the same determination.”

Ooops. The PYD or Democratic Union Party is the leftwing party of most Kurds in Syria’s northeast. Kurds speak an Indo-European language related to Persian and ultimately to English. They are not Arabs like most Syrians, but most are Sunni Muslims with a Sufi or secular bent. The Democratic Union Party’s YPG militia has been the only really effective and consistent fighting force willing to take on Daesh, and the US has embedded some 300 special operations forces personnel with them. Some 50,000 YPG fighters are allied with about 6,000 Arab militiamen in the US-sponsored Syrian Democratic Forces (SDF) coalition. The US has given them air support as they fought bloody and brave battles against Daesh. Most recently they took Manbij away from Daesh in hard and deadly hand to hand fighting. This move was made necessary by Turkey’s unwillingness to block smuggling routes through Jarabulus and Manbij used by Daesh.

So when Turkey invaded Syria with some tanks and infantry and took the border town of Jarabulus away from Daesh (very easily, they just faded away unlike in Manbij), the US had expected that to be the end of it. But Turkish forces went south toward Manbij, picking a fight with the Syrian Democratic Forces militias stationed there after the fall of Daesh in that city. And they aerially bombed them and fired tank shells at them as though they were Daesh. Hence Erdogan’s quote above.

Turkey says it has killed 25 of the US-backed fighters, whom it terms “terrorists.”

And now Turkey- and CIA-backed fundamentalist militias, including elements with al-Qaeda ties, are rushing south from Jarabulus toward Manbij to do in the SDF forces that shed blood and treasure to take it from Daesh while the fundamentalists ignored Daesh for the most part. The far-right-wing fundamentalists hate the left-leaning Syrian Kurds.

These developments look a lot like when Lucy pulls the football away from Charlie Brown at the last minute and he ends up on his back, with Washington playing Lucy and the Kurds playing Charlie Brown. The bad optics put pressure on President Obama’s special envoy for counter-ISIL affairs, Brett McGurk, who at length tweeted,

DOD: We want to make clear that we find these clashes — in areas where #ISIL is not located — unacceptable and a source of deep concern.

That wasn’t enough and he got more explicit:

DOD: The United States was not involved in these activities, they were not coordinated with U.S. forces, and we do not support them.

The US had given Turkish forces air support when they went over the border into Jarabulus. But now that they and their allies are targeting the YPG and Arab militias in Manbij, the US planes have been withdrawn.

The US is calling on the SDF to withdraw from Manbij across the Euphrates, and the Turks say that the US Pentagon gave them an understanding that this would be done.

Of course, nobody is an angel and the Kurdish forces have also been over-reaching. Daesh is based in al-Raqqa and the easiest way to wipe it out would be to attack al-Raqqa. That is due south of Kurdish positions in al-Raqqa province. But instead the YPG insisted on going west and taking Manbij. It wanted Jarabulus, al-Bab and Azaz as well, so as to establish a contiguous Kurdish mini-state that hooked up in the west with the Kurdish canton of Afrin.

The US winked at this ambition as long as the Kurds were doing things to block Daesh smuggling routes.

But Turkey really doesn’t want a new Kurdish mini-state on its border, especially one led by the PYD, which Turkey sees as an offshoot of the Kurdistan Workers Party (PKK) terrorist group, based in Anatolia and in badlands on the Iraqi side of the Turkey-Iraq border. The US also brands the PKK a terrorist organization, but does not see the Syrian PYD in the same light. The Democratic Union Party has post-Marxist, feminist and anarchist tendencies, so it is ironic that the US is supporting it (or at least the Department of Defense is supporting it). About 20% of Turks are Kurds and they predominate in the hardscrabble southeast of Turkey. Opinion polling does not show a strong separatist current among Turkish Kurds, all of whom have a good Turkish education and who often emigrate for day labor and factory work to western Turkish cities, where they behave and vote like their Turkish neighbors. But Ankara is paranoid about Kurdish separatism, and the Syrian Kurds look to them like bad actors who might have an unfortunate influence on Turkey’s own Kurds.

Turkey’s Deputy Prime Minister Numan Kurtulmuş replied to McGurk, “The U.S. knows Turkey’s sensitivity on this issue. A promise was given: The PYD won’t stay west of the Euphrates river.”

Meanwhile, Daesh is still in al-Raqqa and no doubt has more plots up its sleeve aimed at destroying democracy in Europe.

Euronews: ” Turkish-backed campaign in northern Syria ‘unacceptable and of deep concern’ says US”