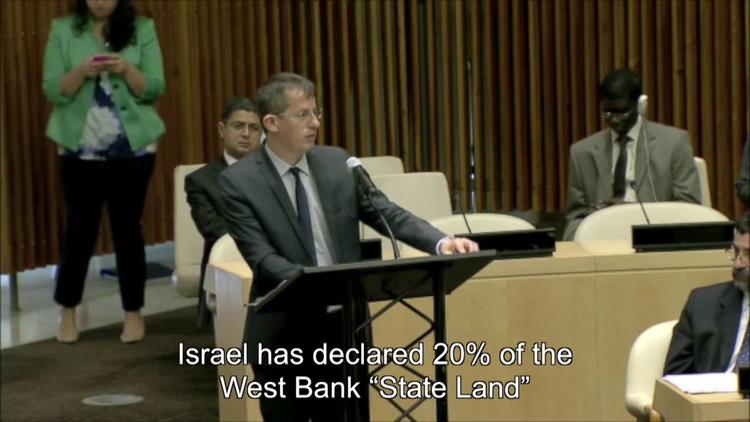 “The only democracy in the Middle East” has a prominent politician calling for legislation to bar Israelis from advocating for sanctions against the state at global colloquiums.

Coalition whip MK David Bitan (Likud) proposed such legislation Saturday, in the wake of leftist organization B’Tselem director Hagai El-Ad’s comments, who during a special session of the UN Security Council on Israeli settlements last week, called on the member states to act against Israel’s occupation of the West Bank.

While opposition parties blasted the proposal, MK Tzipi Livni, Herzog’s co-chair of the Zionist Union party, said even if it doesn’t become legislation “this type of poisonous rhetoric is destroying Israel from within and from without. The damage they cause to Israel’s standing abroad is much bigger than any insignificant organization.”

There is already legislation, under the title of the Boycott Law, passed by the Knesset in 2011, that penalizes individuals or organizations that call for the economic, cultural or academic boycott of Israel or the settlements.

Bitan told Channel 2’s “Meet the Press” on Saturday that El-Ad’s statement was an “explicit breach of trust by an Israeli citizen against the state, and as such he should find himself another citizenship.” The politician said he plans to make an appeal to Interior Minister Arye Dery to revoke El-Ad’s citizenship over his remarks.

In response, B’Tselem said, “For almost 50 years the Palestinians have had no citizenship and no rights, and now the prime minister’s emissary wants to rescind the citizenship of a person who speaks out against this.” The threats will not hinder the group’s activism, not stopping them “and the hundreds of thousands of Israelis who oppose the occupation.”

“Bitan is only trying to derive a little more political benefit on the backs of B’Tselem, but such calls are dangerous and are very close to calling for bloodshed. Democracy is a basic right, not a gift given to those to look good to the coalition chairman. It’s open season,” Meretz Chairwoman MK Zahava Galon said.

Even Zionist Union MK Miki Rosenthal said, “Bitan learned from (Culture) Minister Miri Regev and has become a generator of empty headlines and bills that will never pass. I doubt that his voters buy his foolishness but the damage this man does to Israel’s international image only grows.”

Israeli Prime Minister Benjamin Netanyahu responded to the debate by saying, “What these organizations cannot achieve through democratic elections in Israel, they try to achieve by international coercion,” adding that he would take steps to remove B’Tselem from the list of organizations under which young Israelis can fulfill national civil service commitment.

Btselem: “Hagai El-Ad’s address in a special discussion about settlements at the UNSC, 14 Oct. 2016”