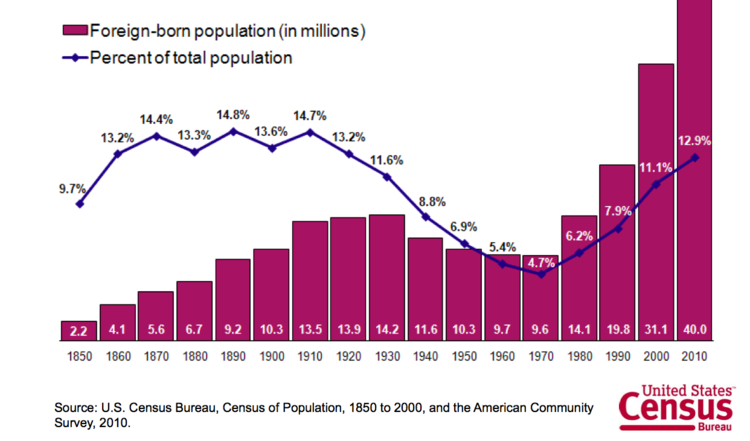 Many of the anxieties that have roiled this year’s election have had an underlying theme, of the decline of white America. Now, as the word “white” is used in common American parlance, it is certainly true that that demographic is declining rapidly as a proportion of the general population. It is already a minority in California and New Mexico. It has fallen from 72% in 2012 to 69% nationally since the 2012 election (which has implications for this year’s race).

If only people with at least 4 grandparents born in America were voting, Trump would win in a 50-state landslide.

People pointed out that Trump couldn’t even vote if that were his criterion, since his mother was an immigrant. Ivanka Trump and the other older Trump children would be doubly disenfranchised, since they have two grandparents from Czechia and one from Scotland. They’re only 1/4 American according to Coulter’s nativism.

But actually, anxieties about white dominance are a perennial in American history. Benjamin Franklin was extremely worried about whites being overwhelmed. He said in “Observations Concerning the Increase of Mankind, Peopling of Countries, etc.” (1751):

So get this. Some of the eighteenth century founding fathers only thought English and Danish people were white. Even Swedes and Germans were “swarthy.” French certainly were. So Franklin would not have considered me white, since my family is French and German. We’re swarthy. We do have some Scottish, but if the Swedish are swarthy I suspect he thought the Scottish were, too. Since Coulter is in part Irish and German, Ben Franklin wouldn’t have accepted her as white, either, and was worried about the German part of her family acting like barbarians and interfering in elections. You can only imagine what he would have thought of German grifters like Donald Trump’s grandfather.

Franklin also worried about the swarthy non-white Germans swamping the white people in Pennsylvania, and meddling in elections even though they didn’t understand liberty (Some of my family is Pennsylvania Dutch who settled in Chambersburg, so I can’t sympathize).

“I am perfectly of your mind, that measures of great Temper are necessary with the Germans: and am not without Apprehensions, that thro’ their indiscretion or Ours, or both, great disorders and inconveniences may one day arise among us; Those who come hither are generally of the most ignorant Stupid Sort of their own Nation, and as Ignorance is often attended with Credulity when Knavery would mislead it, and with Suspicion when Honesty would set it right; and as few of the English understand the German Language, and so cannot address them either from the Press or Pulpit, ’tis almost impossible to remove any prejudices they once entertain. Their own Clergy have very little influence over the people; who seem to take an uncommon pleasure in abusing and discharging the Minister on every trivial occasion. Not being used to Liberty, they know not how to make a modest use of it; and as Kolben says of the young Hottentots, that they are not esteemed men till they have shewn their manhood by beating their mothers, so these seem to think themselves not free, till they can feel their liberty in abusing and insulting their Teachers . . . For I remember when they modestly declined intermeddling in our Elections, but now they come in droves, and carry all before them, except in one or two Counties; Few of their children in the Country learn English; they import many Books from Germany . . .”

Some of the anxiety is about the percentage of recent immigrants, the foreign born, in the population. But the foreign-born make up a smaller percentage of the US population today than was the norm in 1860-1920–a heroic age, the age of Abraham Lincoln and Teddy Roosevelt. Did they whine about all those foreigners coming in? No. That group declined as a percentage of the population artificially, and only because in 1924 the US put in Nazi-style immigration laws essentially based on racial hierarchies (all Asians were excluded, even though the US had a large Asian colony in the Philippines). 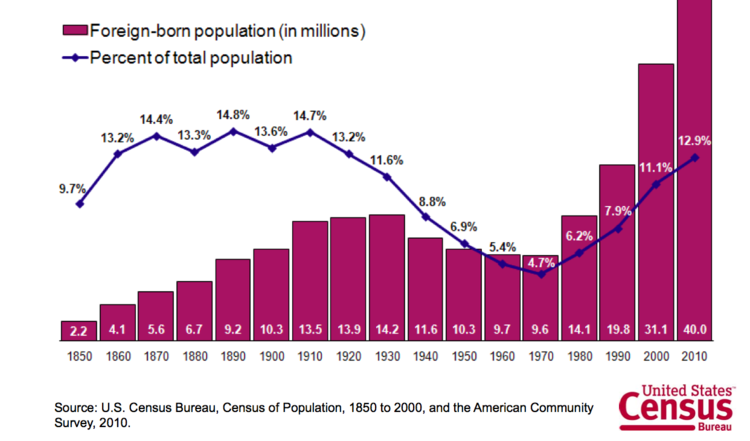 For those who maintain that the wave of immigration in 1860-1924 was “white” don’t know anything about the history of whiteness. Most of them were not in fact considered white (see below).

And, really, it is crazy to use “white” as though it were a natural category. There are no natural categories. We should have learned from the excesses of Aryan racial theory (adopted by the Nazis but not only by them) that categorizing people by “races” is dangerous. Most people still have a 19th century romantic view of race, but it is just a fantasy. People are all mixed up. The Catholic working-class immigrants of the wave that came in 1880-1924 were not initially accepted as white by the propertied Protestants who got to decide these things. You should go back and look what they said about “Slavic” Poles or about the Irish.

Note that 3.5% of people who categorize themselves as white actually have some recent African ancestry. That’s 5% in the Deep South. By the stupid “one drop rule” of the South itself, they’re actually black. (1 in 8 white Louisianans actually has some recent African ancestry, 12.5%). So that national proportion is already actually 65.5%. But if six million people are wrong about their racial category, how reliable can the category be in the first place? (By the way, we’re all from Africa, however welcome that news might be to some “white” people.)

Take Italians, many of whom emigrated to Latin America. Those who immigrated straight to New York and Rhode Island are now considered “white” (and make up nearly 16% of that category). Those who went to Mexico first and then came to the US more recently are “Latinos.” So is what is being said is that the Italian-American families who came in 1895 are threatened by the ones who came from Latin America in the 1990s? Well, that is apparently part of what is being said.

Moreover, what in the world is the difference between Catalans in northeast Spain and Provencale people in southern France? Yet Catalans who went to Colombia and recently came to the US are Latinos. Provencales people who emigrated directly to New Jersey in the 19th century are white. Why?

American history is written from a Massachusetts point of view, with the English at the center of it. But the Portuguese preceded them in North Carolina (are they Latinos?) And what is now California, Arizona, New Mexico, Texas etc. were originally Spain and then Mexico before the US snarfed them up, and they also preceded the English as settlements from the old world in the new. Tim Kaine has pointed out that Spanish was spoken in North America before English. So why not write American history starting with the Southwest and moving east? By the way, in New Mexico the old hidalgo landed class (who are still there) calls themselves Hispanics, doesn’t like to be mixed up with recent Mexican immigrants, and views “white” immigrants to New Mexico as recent arrivals and perhaps not the most cultured, either. Hispanics are often viewed as “immigrants” by the ignorant. But they were there in New Mexico, and the Californios were in California, way before the Irish or Italians or most Germans came to North America. They didn’t immigrate, the US kidnapped them and made them citizens. If the US wanted to be “white” and wanted to categorize Spanish-speakers as non-white (why?), then it shouldn’t have stolen half of Mexico and added it to itself in the Treaty of Guadaloupe Hidalgo.

So, white people anxious about the fate of white people in America should relax. Franklin was wrong, and German-Americans did just fine (they are one of the the biggest ethnic groups in the country and I think we needed Ike Eisenhower during WW II). Americans expanded the groups that are “white” way beyond what Franklin allowed. But I think we should go back to his definition. That way only the English and the Danish would be white, and all the rest of us would be swarthy or tawny. In fact, we need those as census categories.

Sorry, Ann. You’re also in the swarthy category, according to old Ben.