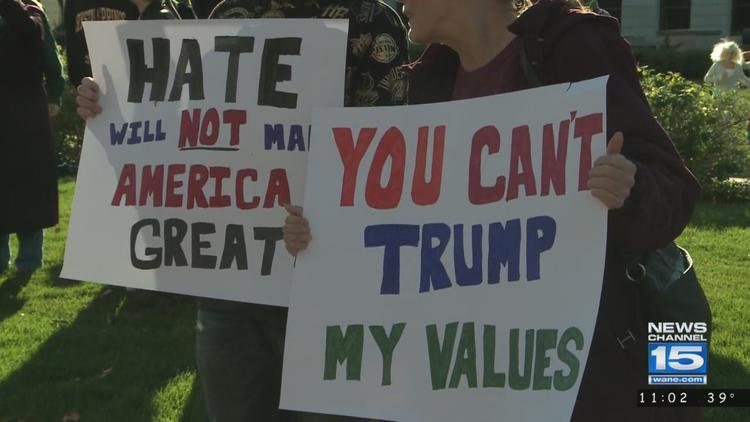 What’s next? That is the big question facing this country after the election. And many people have been sharing their thoughts on that over social and traditional media, over dinner conversations, at the office and on the bus with complete strangers. And, as expected, people are all over the map with ideas and strategies.

One developing theme is that we need to escalate — utilize more militant tactics in our resistance movements. Hatred, division and ignorance has escalated, so it is only natural that our response to it has to escalate along with it to match its intensity.

At the same time, however, I have also seen people suggesting that we need to consider using violent methods to resist Trump and what he stands for — that in this day and age, nonviolence is “not enough.”

While I certainly empathize with the emotions driving that idea, we also have to remember that it is violence that got us here. It is hatred, ignorance, division, intimidation — all manifestations of violence — that brought us Trump.

If we choose to be motivated by anger and hatred, if we choose to divide our communities even more, all we do is continue to feed the exact energy that got us Trump. Even if the anger is towards Trump and his supporters, we are empowering the forces that allowed him to rise to power. We need to be angry, but at the forces of injustice, not its human participants.

In the most thorough study on the subject to date, Maria Stephan and Erica Chenoweth, an academic and author who started as a critic of nonviolence, found that nonviolent movements — even under the most repressive regimes — were statistically twice as effective as violent movements all over the world. They also found (looking at cases where the objective was secession of land or revolution) that movements able to mobilize 3.5 percent of the general population never fail in meeting their stated objective.

Violence breeds patriarchy, which is at the root of so much of the violence in our society. Once you introduce violence to the equation, you limit those who can be on the front lines and those who can lead. Mostly, you limit it to young able-bodied men. And look where that has gotten us as a society. If we are not building a movement with leadership from the most disenfranchised — those who often can’t take up arms — we are fighting a never-ending losing battle. Stephan and Chenoweth’s work also shows that only nonviolent movements have been able to mobilize that magical 3.5 percent.

We also know, however, that simply getting millions of people out into the streets by itself is not enough. If people think that nonviolence is only about getting millions to hold flowers and sing “Kumbaya,” they would be mistaken. Most people forget — or had no idea in the first place — how radical and militant Martin Luther King, Jr. was, and how aggressive a force nonviolence can be. King called for a movement that was just as attention-grabbing and disruptive as a riot.

As a society, we have studied violence for centuries. That’s all we know. So, we assume that’s the only thing that’s going to work, or it’s the most radical thing, or the most effective thing, as a last resort. And that’s because that’s what the state teaches us. We have not studied nonviolence. We do not know what it means or how to use it effectively. We have never given it a real chance, despite the evidence that is out there. We have not invested in it the same way we have with violence.

Violence is the enemy. That idea that we can use force, fear and intimidation to get what we want, to force our will, is what needs to change, not the faces that are in power.

Voting was never going to give us the changes that we need in the first place. We need to organize harder than ever, not just in electoral politics, but in the spaces of social movements. And as we work in our movements, we need to keep in mind that it’s not just systems that we are trying to change, but our culture, our worldview and the ways in which we treat each other.

If you’ve been to a political rally, chances are you’ve chanted something along the lines of “justice for all.” But when we say “all,” do we really it? Or do we mean “all of the people we agree with?” Because that’s the mentality that gave us Trump. Building “beloved community” isn’t about loving those who are easy to love.

So what does it mean to give justice to all people? To validate the real, legitimate fears that drove people to vote for Trump? Their legitimate fears and concerns aren’t racism and sexism. Those are the scapegoats that Trump used to drum up fear. There is real concern about insecurity, of not being able to take care of their families, of an uncertain future, of our values being threatened. And if we can’t find a way to validate those fears that over half of this country has, we will always be divided, and there will always be violence.

This is not about empathizing with the oppressor out of charity. It is about gathering information and understanding the dynamic of the conflict. As Sun Tzu in the “Art of War” taught, “If you know the enemy and know yourself, you need not fear the result of a hundred battles. If you know yourself but not the enemy, for every victory gained you will also suffer a defeat. If you know neither the enemy nor yourself, you will succumb in every battle.”

In the wake of Trump’s election, I am also recommitting myself to taking care of myself, of those around me, and of society at large. We need to take care of ourselves, physically, emotionally, and spiritually, because we have a tough road ahead. With all the forces trying to destroy us, staying healthy is an act of resistance. Honoring ourselves, fighting the internal violence that is so often self-inflicted, telling ourselves that we matter and treating ourselves accordingly is revolutionary.

Exactly a week after the election, in the prison where my organization facilitates nonviolence and restorative justice work, one of my teachers said during his check-in, “Today, I find myself in prison. I don’t like being in prison. But I choose to be happy instead of miserable. Because I have that choice.”

The anger, fear and anxiety that we all feel is legitimate, and we can’t ignore them. We actually need to feel them to the fullest degree. I have real fear for people I love who live in Trumpland. But the best way to protect those we love is to win over those who hate them.

We need to find safe places to feel and release the anger and the fear, so that we can uncover — underneath all of that — an undying yearning for love and connection. That’s what needs to motivate us moving forward. Love can be sweet and sympathetic, but it can also be aggressive and assertive. It is that type of love that we need moving forward.

I will feel that anger, but I refuse to feel desperate, hopeless or apathetic. Those are acts of violence that we do to our own soul, and it is violence that got us to where we are today.

Instead, I will organize harder, protest harder, build harder, train harder, and love harder than I ever have before. And I will always keep in mind these words from King: “We must accept finite disappointment, but never lose infinite hope.”