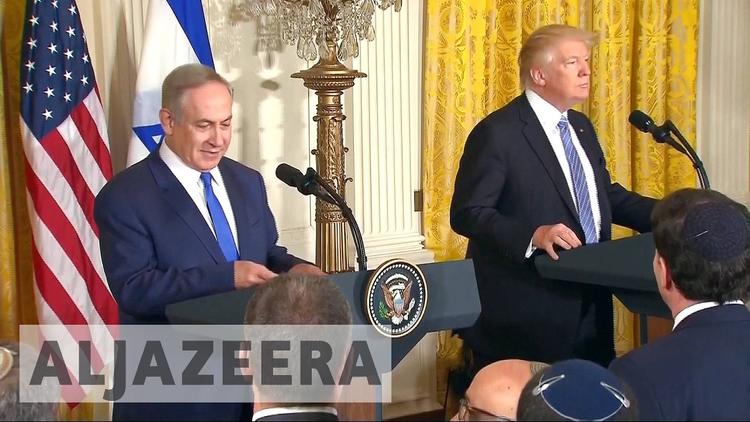 BETHLEHEM (Ma’an) — Following a controversial meeting held Wednesday between US President Donald Trump and Israeli Prime Minister Benjamin Netanyahu, Israeli and Palestinian leaders reacted with praise and condemnation in response to a clear shift in US policy away from backing the two-state solution.

Trump responded to a question on Wednesday regarding his administration’s position on the two-state solution during a press conference preceding the meeting, a day after a US official said that the country was not necessarily committed to the policy as the sole way out of the Israeli-Palestinian conflict.

“I’m looking at two-state and one-state, and I like the one that both parties like,” Trump said, eliciting laughter from Netanyahu. “I can live with either one.”

While members of the international community have rested the solution to the Israeli-Palestinian conflict on the discontinuation of illegal Israeli settlements and the establishment of a two-state solution, a growing number of Palestinian activists have criticized the two-state solution as unsustainable and unlikely to bring durable peace given the existing political context, proposing instead a binational state with equal rights for Israelis and Palestinians.

Right-wing Israeli politicians were quick to applaud the meeting between Trump and Netanyahu, with Israeli newspaper Haaretz quoting far-right Israeli Education Minister Naftali Bennett as saying that “the Palestinian flag has been taken off the flagpole and was replaced with the Israeli flag. The Palestinians already have two states — Gaza and Jordan. There is no need for a third.”

He also wrote on social media: “A new era. New ideas. No need for third Palestinian state beyond Jordan and Gaza. Big day for Israelis and reasonable Arabs.”

Bennett had previously expressed his support for Trump, saying in November following the US presidential elections that a Trump presidency would mark the end of a push for the establishment of an independent Palestinian state.

“Trump’s victory is an opportunity for Israel to immediately retract the notion of a Palestinian state in the center of the country (Israel), which would hurt our security and just cause,” Bennett said at the time. “This is the position of the President-elect, as written in his platform, and it should be our policy, plain and simple. The era of a Palestinian state is over.”

Meanwhile, Israel’s Public Security Minister Gilad Erdan from the Likud Party was quoted by Haaretz as saying that Trump’s stance on the Israeli-Palestinian conflict “proves we are in a new era. The positions the president took indicate an understanding that the two-state solution is not the only solution for achieving peace and that the time has come to reverse the equation and exert pressure on the Palestinian side.”

Right-wing ministers across the board indicated their view that Israel was entering a “new era” not restricted by the two-state solution or longstanding peace standards established by the international community.

Israeli Culture Minister Miri Regev, also from the Likud party, reportedly said that “the era of the freeze has ended. It’s the end of the [construction] freeze in Judea and Samaria,” an Israeli term for the West Bank, adding that “a new diplomatic era began in Washington today.”

Other right-wing ministers expressed their relief that the Israeli government no longer had to maintain an image of supporting the two-state solution which international peace efforts have focused on for decades as a route out of the Israeli-Palestinian impasse.

“Finally the end has come for a mistaken and dangerous idea: setting up a Palestinian terror state in the heart of the Land of Israel,” Israeli Science and Technology Minister Ofir Akunis was quoted by Haaretz as saying.

Meanwhile, Knesset member Shelly Yacimovic from the Zionist Union, considered to be more “left-wing” in the Israeli political landscape, reportedly stated that Trump’s remarks on Wednesday evening did not differ in any major way from previous US administrations, pointing out that Trump had expressed his disapproval of Israeli settlement expansions and articulated his support for finding a solution that benefits both parties.

Palestinian Ambassador to the UN Riyad Mansour released a statement following the press conference saying that peace would not be achieved “without determining the basis of the peace process,” and highlighted the fact that the majority of the international community continued to support a two-state solution despite Trump and Netanyahu’s comments.

Meanwhile, Hamas spokesman Hazem Qasim called on the Palestinian Authority (PA) to abandon negotiations with Israel and the belief that the US is capable of acting as a mediator to the peace process, adding that Trump had made it clear that the current and previous US administrations were biased in favor of Israel.

He also said that the US administration backing down from its already weak position on the two-state solution indicated an escalation of US bias in favor of the Israeli occupation.

Fatah official Rafaat Elayyan also released a statement condemning the meeting, saying that Netanyahu and Trump had “publicly killed the dream of establishing a Palestinian state with East Jerusalem as its capital.” He also stated that Trump had disregarded international law and all previous agreements between the Palestinians and Israelis to achieve peace in the region.

“We are facing today an occupation that refuses to establish an independent state and aims to annex the West Bank and Jerusalem to Israel by expanding settlements supported by the US administration,” Elayyan said. He went on to urge the Palestinian leadership to “adopt a new strategy” based on unification that can end national conflict within Palestine.

“If the Trump-Netanyahu meeting is not enough to unify our national front, then we will never be able to confront this challenge,” Elayyan added.

Elayyan also said that Palestinians were waiting for the Arab Summit to be held in Amman next month where Muslim and Arab states should take a stand to support Palestinian people and their rights “before it’s too late.”

Elayyan added that Trump had given “a green light for the Israeli government to continue settlement activity and aggression against the Palestinian people,” and underscored that the US would be responsible for any “explosive situation” in the region.

“The Palestinian people will continue our fight towards freedom and democracy,” he said.

Meanwhile, Media Commissioner of the Fatah movement Nasser al-Qudwa said that “rejecting the two-state solution is rejecting the peace process,” and underscored that any substitute would be a “bloody and painful confrontation.”

Al-Qudwa added that the Palestinian leadership and Fatah had a clear position stressing the importance of Palestinian national existence and the establishment of a Palestinian state, noting that Palestinian rights were “non-negotiable.”

The left-wing Popular Front for the Liberation of Palestine (PFLP) said in a statement that the Trump-Netanyahu meeting marked a “clear turning point to terminate Palestinian goals,” adding that the policy shift represented a violation of international law.

The PFLP highlighted five steps it believed must be conducted to confront the recent US-Israeli policy shift: declare a unified Palestinian stance rejecting US-Israeli policies; withdraw Palestinian recognition of Israel; hold an urgent meeting between all national and Islamic forces to prepare a new national strategy to address oncoming challenges and protect national rights; end the Palestinian national conflict immediately and continue efforts to hold a Palestinian national council session; and cease the PA’s “creation of illusions” on the international stage and pull out of the Oslo Accords.

Meanwhile, High Representative of the European Union (EU) for Foreign Affairs and Security Policy Federica Mogherini said on Wednesday that the EU would always support the two-state solution, adding that “there is no doubt that our embassy [Italian] will stay in Tel Aviv… and we are still convinced that the solution is coexistence between two states Israel and Palestine.”

On Wednesday, Palestine Liberation Organization (PLO) Secretary-General Saeb Erekat said that the two-state solution was already a hard-reached compromise as a basis for peaceful conflict resolution, and that the proposed Israeli alternative to such a solution would equal to apartheid.

“Contrary to Netanyahu’s plan of one state and two systems, apartheid, the only alternative to two sovereign and democratic states on the 1967 border is one single secular and democratic state with equal rights for everyone, Christians, Muslims, and Jews, on all of historic Palestine,” Erekat stated.