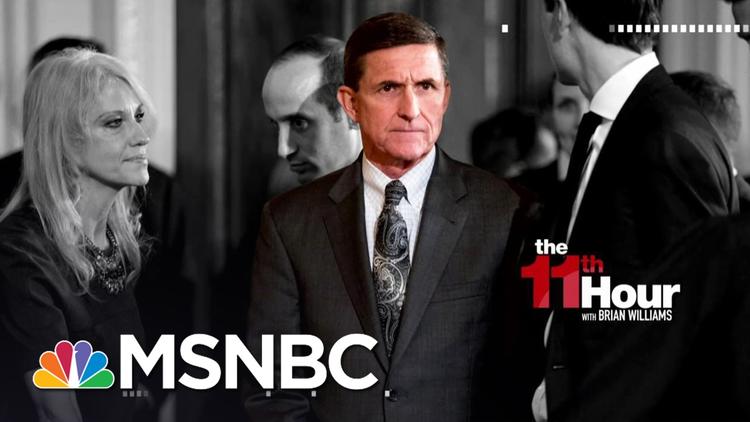 Flynn was given a pink slip for embarrassing Vice President Mike Pence by assuring him that he had not discussed sanctions with the Russian ambassador, Sergey Kislyak, in his unusual late December telephone call. Obama had just that day placed more sanctions on Russia, in reaction to Russian hacking activities during the election.

But in addition, the revelations about Flynn were flying in DC. WaPo revealed that the former acting Attorney General, Sally Yates, had warned Trump that the Department of Justice had reason to believe that he was open to being blackmailed by the Russians (because of his lie about not discussing sanctions). Of course, similar allegations have been made about Trump himself.

The Russian press reported that Flynn had “retired.”

I wrote on Saturday,

The Washington Post reports that conversations with no less than nine intelligence officials confirm that Flynn did talk with Russian Ambassador Sergey Kislyak about Obama’s sanctions on the Russian Federation. Flynn apparently urged the Russians not to be too upset about the new sanctions suggesting that the Trump administration would revisit them. Flynn at the time was not in any government office and had no right to negotiate with a foreign power, an act prohibited to civilians by the Logan Act. Flynn must have known that the Russian ambassador’s telephone is under NSA surveillance and so it is weird to the extreme that he would risk breaking the law in public, so to speak.

It is bad enough that Flynn may have committed this breach of the law. On top of that, when questioned about these allegations he lied and said he had not discussed sanctions with Kislyak. He not only lied himself but he told Vice President Mike Pence this lie and so arranged for Pence to go on television and repeat Flynn’s lie. Flynn wasn’t under oath, so I suppose this is just a lie and not perjury. But surely lying to your boss and embarrassing him would be a firing offense?

So I put my finger on exactly the transgression that led to Flynn’s downfall– that he lied to Pence. Apparently there are actual transcripts of the Flynn-Kislyak conversation in the hands of the CIA, which Flynn, Bannon and Trump had trashed on the issue of whether Russia had intervened in the election. Flynn was reckless to bring up an economic issue with Russia while still a civilian, and stupid if he did not know he was being recorded.

There is another investigation of Flynn that I also mentioned on Saturday, as to whether he took a fee from the Russian Federation to appear in Moscow at a dinner also attended by Vladimir Putin in honor of the Russian state-owned news service, Russia Today. This payment would violate the Logan Act, given that Flynn is a retired Lt. General and could have been recalled to service (as in a way he was, only on the civilian side, when Trump made him National Security Adviser).

Flynn had a lot of baggage. There are also questions concerning the about-face of Flynn with regard to Turkey. He had been a critic (he hates Muslims) but then when his consulting firm got a contract from a Turkish businessman close to President Tayyip Erdogan, Flynn abruptly switched around and became a big booster of Ankara.

These indications that the general is a man of easy virtue are not the only alarming things about him, of course. There is also his hatred of Muslims, what with calling Islam a cancer, and alleging that it is a political movement masquerading as a religion, his call for Arab and Iranian leaders publicly to confess that their ‘Islamic ideology’ is sick, and in need of ‘healing.’

What takes the cake is his allegation on Sirius radio in 2015 that Arabic signs had been erected on the border with Mexico to guide Muslim radicals into the United States.

This is tin foil hat stuff (and there’s lots more signs of mental instability in the man’s twitter feed, including buying into the bizarre pizzagate conspiracy theory that Hillary Clinton was running a pedophilia ring out of a DC pizza joint).

Any normal person who knew anything serious about Flynn’s erratic and fantastic assertions and about his shady “consulting” with foreign powers should have known better than to put him in charge of advising on America’s national security. He had already been fired from the Defense Intelligence Agency.

That Trump could not see what a hot mess Flynn was reflects extremely poorly on Trump’s judgment, and a mere resignation cannot change that.

Worse, questions are swirling about whether Trump himself put Flynn up to calling the Russians when Obama was still in office, and whether Flynn was just a messenger boy for his boss when he hinted around that Russia shouldn’t worry too much about those Obama sanctions.

Flynn may have fallen on his sword, or been tossed off the Trump Tower onto it. But severe questions about Trump’s judgment and perhaps even his entanglement in an illegal act (civilians are not allowed to conduct diplomacy with foreign powers). Every time Trump dances away from criticizing Putin, you have to wonder if he was in the same basket with Flynn. Kompromat.