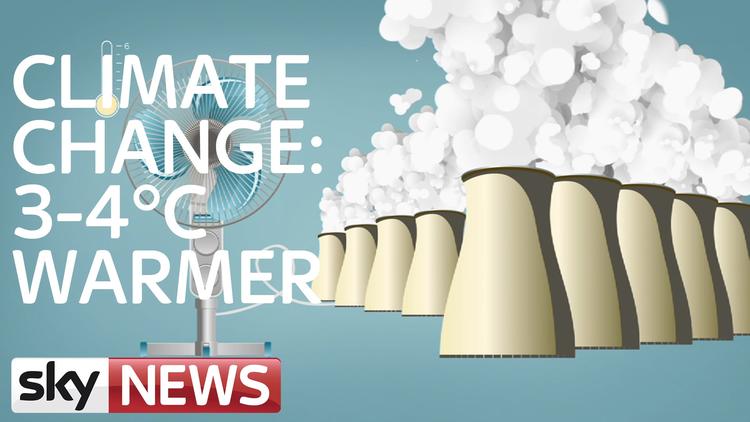 President Donald Trump is making it less likely the United States will meet the emissions targets it agreed at the 2015 Paris climate conference. These targets are themselves insufficient to meet the Paris Agreement’s overall goal of keeping global warming well within 2℃.

But there is another possibility for those who want action. The idea is called “claim the sky” and it would involve a global movement, working together with the most affected countries, to claim ownership over our atmosphere.

Trump has promised to withdraw from the Paris Agreement, appointed the former chief executive of oil giant Exxon as his secretary of state, and is planning huge changes to Obama’s Clean Power Plan and the Environmental Protection Agency.

It is true that the cost of renewables like solar and wind energy is dropping rapidly. It’s therefore conceivable that economic factors alone will drive the shift away from fossil fuels. But if nothing more is done, and America and other countries continue to dish out billions in subsidies to the fossil fuel industry, it may take far longer than necessary to achieve the goals of Paris, if they can be met at all.

“Claiming the sky” could help reduce emissions more quickly. At the same time it would assist with adaptation, poverty reduction and public perception, and counter policies of the Trump administration and other countries that support fossil fuels.

It involves establishing a trust to collect fees when damage is done to the atmosphere. That money can then be used to reduce poverty, rebuild communities and restore the atmospheric commons.

After all, the atmosphere is a community asset that belongs to all of us. The problem is that it is an “open access” resource – anyone can emit carbon dioxide with very little direct consequence for themselves, despite the huge cumulative consequences for everyone.

Charging companies and individuals for the damage their emissions cause – for example through a carbon tax or trading system – would encourage lower emissions. However, despite some interesting regional experiments, implementing such a system at a global scale has proved to be next to impossible.

Global civil society could change this, if it claims property rights over the atmosphere. By asserting that we all collectively own the sky, we can begin to use the legal institutions that uphold property rights to protect our collective property, charging those who damage it and rewarding those who improve it.

The Public Trust Doctrine is a legal principle that holds that certain natural resources are to be held in trust as assets to serve the public good. Under this doctrine it is the government’s responsibility to protect these assets and maintain them for the public’s use. The government cannot give away or sell off these public assets. The doctrine has been used in many countries in the past to protect water bodies, shorelines, fresh water, wildlife and other resources.

Several court cases have confirmed this responsibility. Just before the Paris talks, a Washington state judge ruled that the government has “a constitutional obligation to protect the public’s interest in natural resources held in trust for the common benefit of the people”. Earlier in 2015, a New Mexico court recognised that the state has a duty to protect the state’s natural resources – including the atmosphere – for the benefit of residents. The same year, a court in the Netherlands ordered the Dutch government to cut the country’s emissions by at least 25% within five years.

The time has come to expand this principle to cover all of the natural capital and ecosystem services that support human well-being, including the atmosphere, oceans and biodiversity.

Holding climate polluters accountable for their damage is more straightforward than it might seem. Just 90 entities are responsible for two-thirds of the carbon emitted into the atmosphere.

I and several colleagues wrote an open letter asking nations to establish an atmospheric trust on behalf of all current and future generations. The proceeds could fund restoration projects or expedite the transition to non-nuclear, renewable energy. In addition, governments could charge for ongoing damage via a carbon tax or other mechanisms.

Many of us already know or have experienced the benefit of a trust. There are private land trusts, such as the Nature Conservancy in America, or water trusts like the Murray-Darling’s Environmental Water Trust in Australia. The Alaska Permanent Fund and the Norwegian Sovereign Wealth Fund are examples of trusts that put aside royalties from fossil fuel extraction for public benefit.

Just as governments individually levy fines in the event of an oil spill or other environmental damage within their borders, the creation of a trust is an opportunity to do this on a wider scale. The trust will maintain transparency through the internet, publishing financial carbon accounts of projects funded by polluters.

But given that governments have not acted on their own, pressure from civil society will be required to compel them to act and to counteract the inevitable corporate resistance. In other words, a concerted effort to “claim the sky” as a public trust on behalf of all of global society, in combination with the solid legal framework provided by the Public Trust Doctrine, may just do the trick.

As US Senator Bernie Sanders has said, “When millions of people stand up and fight back, we will not be denied.” It is time to claim our right to the atmospheric commons and a stable climate.

We need a broad coalition of individuals and groups to claim publicly that the atmosphere belongs to all of us and our descendants, and to demand that polluters pay for damage done and for restoring and maintaining our climate.

The fossil fuel era is coming to an end. The industry is making a last-ditch attempt to sell off its assets before these become stranded, aided by government policies and subsidies. This will cause severe and lasting damage to our atmospheric commons.

But if we can claim the sky, create an atmospheric trust and bring damage claims against the biggest polluters, we can further tip the economic scales against fossil fuels and toward renewable energy sources. We can speed up the transition to the 1.5-degree world that the Paris Agreement aims for, and that current and future generations of humans claim as our common asset.