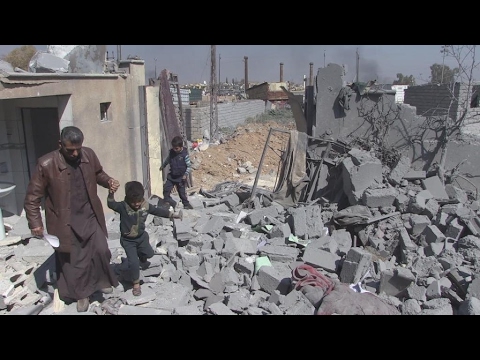 While Iraq’s pro-government forces battle on in Mosul, extremists are heading back to other provinces. Locals say the number of attacks keep rising – and that something needs to be done before it is too late.

In the town of Baiji in central-northern Iraq, a senior police commander has been recording attacks by extremists – almost every day.

“Before, extremist attacks were more rare,” the police chief, Saad al-Azzawi, told NIQASH. “But over the past few weeks, the numbers have increased in a very frightening way. Our city was cleared of extremists from ISIL two years ago and they rarely came back. But things have changed recently. The extremists keep carrying out these hit-and-run attacks. Last month we recorded 40 of them.”

Al-Azzawi and his men inform the government in Baghdad of the attacks. But it seems little attention is paid to them: After all, all eyes are on the northern city of Mosul where pro-government forces are battling to clear the extremist group known as the “Islamic State” [group] out of that city.

The army has turned its back on this dangerous area. Reinforcements are needed.

Last week, over 20 locals were killed after suicide bombers attacked a wedding in Hajaj village. It was the deadliest attack in the area for months.

Al-Azzawi can only wonder at the government’s indifference. “The government is so engaged in Mosul that terrorists are infiltrating back into other cities,” he complains. “Urgent steps need to be taken to prevent them from regrouping.”

It has been about 20 months since ISIL, or the IS group was expelled from the area around here, including from the major city of Tikrit and other parts of Salahaddin province. And those displaced from Salahaddin are slowly beginning to return home to try and start normal lives again. But the area still has major security problems.

Most of these stem from the mountainous Makhoul area near Baiji – this range of hills extends from Diyala in the east, into the north of Salahaddin. It’s well known as a hiding place for ISIL fighters and despite dozens of military operations against them here, they have managed to retain control of the backwoods area.

“Hundreds of IS fighters have started arriving in this mountain area from Mosul,” says Akram al-Aboudi, a senior member of one of Iraq’s volunteer militias. “This is thanks to the siege of Mosul by pro-government forces. We are very well aware that the IS group is back in this area. We also know they are still weak. That’s why they are using these hit-and-run tactics, usually with less than ten men. Then they disappear like ghosts.”

Al-Aboudi says he has lost a number of his brothers in arms, after they were deployed to the areas next to the Makhoul mountains, in order to prevent the extremist fighters from getting closer to local towns and villages. This is why he is particularly critical of the government’s focus on Mosul only and wants reinforcements sent.

“The army has turned its back on this dangerous area,” he declares. “They should have listened to the volunteer forces who said that we needed to clear out the remnants of the IS group, before going onto Mosul.”

Another major problem for the security situation in Salahaddin has to do with the various military and non-military forces who are supposed to be keeping the province safe from the extremists. There are four groups in play: The Iraqi army, the local police, tribal groups and the Shiite Muslim volunteer militias, who recently took on a more formal role in Iraq.

One official, who commented on condition of anonymity, told NIQASH that this was causing chaos. “The local council has been trying to coordinate all the forces for months now,” the official said. “They want to unite everyone under one command. But it hasn’t happened. Instead each force acts independently of all the others and in some cases, they don’t even coordinate with the local council, whose legal right it actually is to administrate this area.”

Similar problems are being faced by locals in neighbouring Diyala province. Last week extremists managed to get into the Atheem area in Diyala for the first time in about three years, to launch a number of hit-and-run attacks on checkpoints on the provincial border with Salahaddin.

In a rugged area called Mtaibijh, between the two provinces, dozens of extremist fighters have been gathering for the past few weeks, according to a local politician, Uday al-Khadran. “The IS fighters who fled Diyala, Kirkuk and Salahaddin during battles a few months ago all found refuge in Mtaibijh.”

The place has become a training camp and a place where car bombs are being manufactured, al-Khadran notes. “More recently the IS group has been using drones to monitor the positions of the security forces from there. The Iraqi government has got to move quickly to stop them,” he concluded.

The Iraqi government has stepped away from the political controversy around Hawija, preferring to focus instead on the operations in Mosul.

Many locals believe that when the Iraqi government moved military forces out of Diyala and further north to assist in the battle for Mosul, the extremists saw their chance. One of the first provinces to see the back of the IS group, Diyala had had good security for a long time. But this changed when the battle for Mosul began.

Last Thursday the Shiite Muslim ex-volunteer militias announced that they would be creating a new force to fill the security vacuum. At the same time though, the IS group continues to send attackers to military checkpoints and dozens of soldiers are being killed or wounded.

Much of this can be attributed back to the town of Hawija, which lies south of Kirkuk, on the Makhoul range.

The mostly Sunni-Muslim populated town has been controlled by the IS group since the middle of 2014. It was the site of ongoing Sunni Muslim anti-government protests that were halted violently by the Iraqi army in early 2013, resulting in as many as 50 deaths. The IS group found a lot of support here when they first arrived over two years ago and it remains an important base for them.

Many analysts said that it was all important to push the IS group out of Hawija before the battle to take back Mosul could start. But political problems have prevented this – the Iraqi government and Iraqi Kurdish authorities as well as other participants couldn’t come to any kind of agreement as to how their separate forces should conduct the battle.

The Shiite Muslim groups want to be part of the fighting for the sake of Shiite Muslim-majority villages in the area. However the Iraqi Kurdish military doesn’t like that idea because they fear the militias will stay there after the fighting is over and it is a little too close to terrain they believe belongs to them. Local Sunni tribal fighters in the area are not strong enough to do the job by themselves and the Iraqi government appears to have stepped away from the political controversy, preferring to focus instead on the operations in Mosul.

“Everyone knows the risk that Hawija presents and the government needs to act on this, not just for the sake of Salahaddin and Diyala, but for the sake of the thousands of people trapped there,” Ahmad Abdullah al-Jibouri, the governor of Salahaddin, told NIQASH. “Every day our security forces meet families who have managed to escape Hawija. There is a humanitarian tragedy unfolding there.”

France 24: “Caught in the crossfire: The human cost of the battle for Mosul”