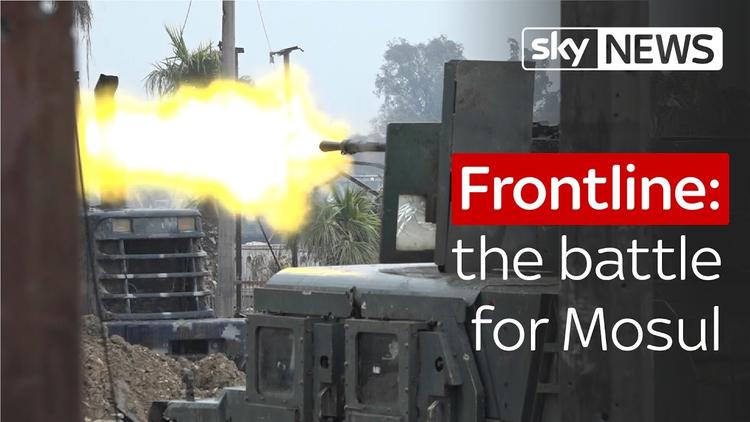 Mosul locals, some of whom have escaped the extremists and some who are still under their control, describe the Islamic State group’s desperate tactics. They will fight to the death, trapped locals warn.

A month has passed since Iraqi pro-government forces began to try and push the extremist group known as the Islamic State out of the western side of Mosul. And the Islamic State, or IS, group appears to be becoming increasingly desperate, fighting to the death with no regard for civilian lives or property and no apparent escape routes.

One Mosul local described what the IS fighters were doing as a “scorched earth policy”. They had not launched any successful attacks, they were shelling indiscriminately, bombing areas that were no longer under their control, and were basically trapped, he said.

In a recent press statement Lieutenant General Talib Shaghati, head of the Iraqi counter-terrorism forces who are leading the fight to retake the northern city confirmed this, saying that, we “are not fighting a regular army with clear methods and plans. We are fighting an extremist organization that changes its tactics all the time and does not follow any rules. This is an organization that has no consideration for any humanitarian issues in war.”

Fighting in western Mosul was always going to be more difficult. The population density is higher in this part of the city and there are many houses built close to one another in an old city with narrow alleyways, that won’t allow larger vehicles like tanks or armoured vehicles to pass easily.

On the eastern side of the city, the IS group used a lot of car bombs, driven by suicide bombers. The cars would be driven to obstruct Iraqi troops from getting closer to the IS fighters, or to trap them. Shaghati says an estimated over 850 exploding cars were used against them on that side of the city.

However very few car bombs are being used on the western side. For one thing the streets are too narrow for anything other than restricted movements and there has also been an increase in air cover for the pro-government forces.

On the western side of Mosul the IS group have been deploying snipers, many of them from Russia or other central Asian countries, locals caught in the fighting report. Fighters bearing light to medium weaponry and suicide bombers with explosive belts have been moving quickly through and around the crowded housing.

This kind of action had been prepared for. The IS group had instructed local homeowners to make holes in their walls that were 100 centimetres high and wide. This meant that their fighters could move from house to house without being detected.

Saad Agha*, a resident of the New Mosul neighbourhood, which was freed of the IS group around a week ago, told NIQASH that he had refused to make a hole in his wall. Angry IS fighters then gave him an hour to make the required hole or they would blow up his house, they said.

“They scared me and they scared my family,” Agha says. “So I made the hole.”

The holes were used by the IS fighters to escape and eventually also by the counter-terrorism troops, Agha recounts. “The Iraqi soldiers also came through these holes and told us that we are free,” he says.

IS fighters had also told civilians to park their cars on the streets so that they could use them as barriers and impede the troops advancing. When pro-government forces get close to a vehicular blockade, the IS members set the cars on fire, in order to obscure the vision of aircraft that might target them. There are hundreds of burned out cars all through the areas that the IS group has been expelled from.

Ahmad Saeed*, a local of the Risalah neighbourhood which the pro-government forces reached just a few days ago, told NIQASH how his family’s vehicles were destroyed.

“This dirty person came to our house and asked us to give us some fuel. He then started to pour it on our cars and our neighbours’ cars and then set them alight,” Saeed says angrily; the corpse of the fighter in question now lies on the street. “While he was torching the cars, he kept saying: obedience to God, obedience to God.”

When the IS group realizes it is about to lose control of an area, it has started forcing locals to move into other areas with them, in order to use them as human shields.

Thousands of people have been moved into mosques, schools and health centres in the old city in western Mosul.

In a telephone conversation, Um Amar* says that the IS group forced her family to take in another family from the neighbourhood known as 17 July. “And this is just one family they have brought from the southern neighbourhoods against their will,” she says. “There are hundreds more. Each house in our area now has more than ten people living there and we do not have enough to eat or drink,” she says fearfully.

“We do not know how things are going to go from here. We live near the outskirts of the city but the war is so close to us now,” she says. “Will they try and take us with them too? And where would they take us? The Iraqi forces are gaining control of the city and there is no escape for the extremists.”

Some of the civilians have tried to escape this fate. But it is very difficult to get out of the IS-controlled area and into the pro-government-held parts of the city; there is no established or safe route.

Local man Abdul Samir* and his family of six tried to escape but were caught.

“They beat me and then they dragged me out to shoot me,” he told NIQASH in a phone call. “I begged them not to, and my children were crying. They had female police with them and they searched my wife and found her mobile phone. So they became even more angry and accused me of fighting for the Iraqi army. They wanted to kill our whole family then and there, but just one of the fighters didn’t like the idea. He managed to argue them around and they released us.”

But to what kind of fate, Samir does not know. “They brought us back to the Caliphate so I guess we must stay here, in this house, in the middle of this war. All I can do is put one hand on my head to protect myself from the bombs falling, and the other hand on my stomach, to protect me from starvation. I know that either we will die here or we will be free,” he said, shortly before starting to cry and hanging up.

*Real names have not been used for reasons of security.