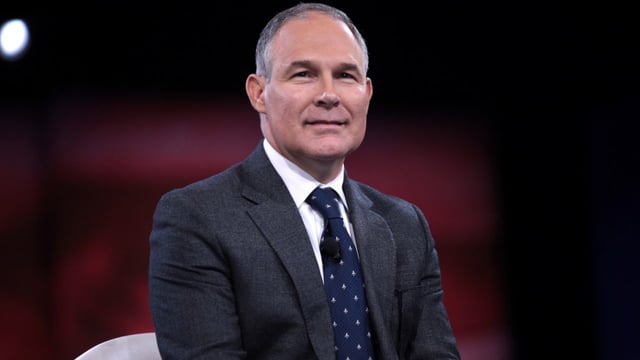 “If you look at these Cabinet appointees, they were selected for a reason. And that is for the deconstruction [of the administrative state].”

At its best, government saves the environment from polluters, prevents companies from exploiting consumers, safeguards individuals against invidious discrimination and other forms of injustice, and lends a helping hand to those in need. None of those principles guides the Trump/Bannon government.

Two months into Trump’s presidency, historian Douglas Brinkley said it would be “the most failed 100 days of any president.” David Gergen, a seasoned adviser to Presidents Nixon, Ford, Reagan and Clinton, agreed. But they’re using a traditional scorecard. With the help of Trump Party senators and loyalists, Steve Bannon and his boss are remaking America. Future generations won’t judge kindly those who let it happen. Then again, if Trump’s trajectory continues, maybe there won’t be many more future generations anyway.

After losing his seat on the National Security Council, Bannon’s influence over US foreign policy may have waned. But regardless of his future, he has already had an indelible impact on the country. At CPAC, he declared that key members of Trump’s Cabinet were “selected for a reason.” In the first 100 days of Trump’s presidency, that reason has become clear. They have demonstrated a collective determination to deconstruct not only the administrative state, but also the essence of America itself. They hold views that are anathema to the missions of the federal agencies they now lead. They blend kleptocracy — government by leaders who seek chiefly status and personal gain at the expense of the governed — and kakistocracy — government by the worst people.

Anyone who lived through the 1960s — or observes China and India today — knows what happens when polluters get a pass. Bill Moyers’ Jan. 31, 2017 video essay previewed how Scott Pruitt was poised to return the nation to the darkest chapter in its environmental history: contaminated water unfit for drinking or swimming; smog-filled air unfit for breathing; a deteriorating planet careening toward a time when it will be unfit for human habitation. In 1970, President Richard Nixon created the EPA for a reason. Now it’s the victim of a hostile takeover.

After the election, Trump asked one of his billionaire friends, Carl Icahn, to screen candidates for the job of EPA administrator. As an unpaid adviser, Icahn wasn’t subject to the stringent ethics and conflict of interest reviews facing Cabinet appointees. During his interview of Pruitt, Icahn asked specifically about an ethanol rule that was costing one of Icahn’s oil refineries more than $200 million a year. Pruitt said he opposed the rule; Icahn then supported Pruitt for the EPA job.

Along with Icahn’s blessing, Pruitt had other uniquely Trump qualifications for the position. As Oklahoma’s attorney general, he sued the EPA 14 times; 13 of the lawsuits included co-parties that had contributed to Pruitt or Pruitt-affiliated campaign committees. He sided consistently with his state’s poultry farms, energy producers and other polluters. Explaining why for the first time in its 50-year history the Environmental Defense Fund opposed Pruitt’s nomination to head the EPA, the EDF’s president said, “[A]t some point when the nominee has spent his entire career attempting to dismantle environmental protections, it becomes unacceptable.”

On Feb. 16, 2017, an Oklahoma state court judge gave Pruitt five calendar days to release his email exchanges with the fossil fuels industry. But before another 24 hours passed, Sen. Mitch McConnell (R-KY) and fellow Trump Party senators gave America the bum’s rush and confirmed Pruitt’s nomination to lead the EPA. A few days later, the release of 6,000 pages of Pruitt emails provided more proof of his cozy relationship with the industries he now regulates.

Once in office, Pruitt wasted no time. On March 9, 2017, he dismissed the impact of human activity on climate change: “I would not agree that it’s a primary contributor to the global warming that we see.” That put him at odds with the EPA’s findings and contrary to international scientific consensus. But he’s in line with Trump, who has called climate change a “hoax.”

Trump’s budget director, Mick Mulvaney, labeled climate science expenditures a “waste of money… I think the president was fairly straightforward: We’re not spending money on that anymore.” And they aren’t. Trump’s proposed budget would slash EPA funding by more than 30 percent — to its lowest level in more than 40 years. It would reduce by half the EPA’s Office of Research and Development. It would cut civil and criminal enforcement personnel by 60 percent. It would eliminate regional water cleanup programs from the Chesapeake Bay to the Gulf of Mexico, from San Francisco Bay to the Great Lakes and from Long Island Sound to South Florida. Superfund money for cleaning up contaminated sites would decline by 30 percent. Appropriations for vehicle emissions and certifications would all but disappear.

While endangering the planet, Trump and his minions stage photo ops to support an ongoing disinformation campaign about illusory benefits from their unprecedented environmental destruction. At the EPA on March 28, Pruitt, Vice President Pence and a group of coal miners surrounded Trump as he signed a sweeping executive order aimed at reversing President Obama’s signature initiatives. His actions, which included rolling back emissions standards and lifting the moratorium on mining federal lands, won’t bring back coal jobs that were lost to technology, cheaper sources of cleaner energy and competitive market forces. But the Trump/Pruitt agenda will provide short-term profit incentives that encourage American companies to cede leadership in the development of innovative solutions to China, which has been doubling down on clean energy research for the long-term.

In Secretary Perry’s first address to his department, he said Trump had told him to “do with American energy what you did for Texas.” But an approach that might work for one state competing with others doesn’t work for the zero-sum game that is the country as a whole. Even worse, there was a dark side to Gov. Perry’s lower taxes, less regulation approach. Texas public schools are among the worst in the nation; rates of teen moms and uninsured kids are among the highest, as is its rate of uninsured citizens: 27 percent. Residents of the state’s two largest cities, Dallas and Houston, are the least health-insured of any major metropolitan area in the country.

Perry’s agenda is consistent with his oil industry connections. Until Dec. 31, 2016, Perry served as a board member of Energy Transfer Partners and Sunoco Logistics Partners, which jointly developed the Dakota Access Pipeline that the Army Corps of Engineers had stopped before Trump took office. Four days after the inauguration, Trump blew past protesters carrying “No DAPL” signs and issued an executive order approving it. After the temporary employment of construction labor to build the controversial pipeline ends, it will create approximately 40 permanent operating jobs.

Two months later, Perry stood nearby as Trump announced his approval of the Keystone Pipeline that President Obama had stopped in 2015. Obama had said approving the project “would have undercut” America’s global leadership on fighting climate change. Reversing Obama’s order, Trump called it “the first of many infrastructure projects” and “a great day for jobs.” The pipeline will produce 35 permanent jobs.

Steven Harper blogs at The Belly of the Beast, is an adjunct professor at Northwestern University, and contributes regularly to The American Lawyer. He is the author of several books, including The Lawyer Bubble — A Profession in Crisis and Crossing Hoffa — A Teamster’s Story (a Chicago Tribune “Best Book of the Year”). Follow him on Twitter: @StevenJHarper1.