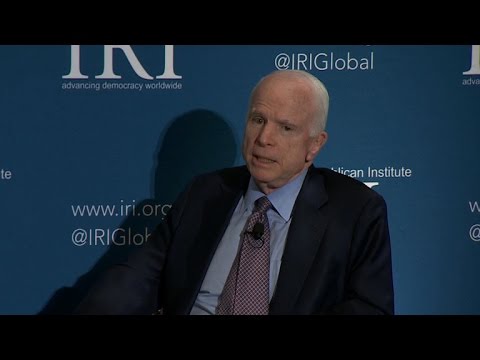 Contrary to the myth, Nixon’s resignation was anything but the inevitable consequence of a powerful constitutional juggernaut.

A witness indicates H.R. Haldeman, Nixon’s chief of staff, on a diagram as he testifies before the Senate Watergate Committee during the Watergate hearings. The nationally televised hearings began in mid-May 1973 and resulted in the resignation of President Richard Nixon on Aug. 8, 1974. (Photo by © Wally McNamee/CORBIS/Corbis via Getty Images)

“Our Constitution works.” So declared newly installed President Gerald Ford in 1974 after Richard Nixon’s resignation. “Our great republic is a government of laws and not of men.”

Oh glory be! All’s well that ends well. That has been the conventional wisdom ever since. Nixon was checked by checks and balanced by balances. The republic was saved, proving, in the words not only of Ford but of just about everyone, that the system does indeed work.
The real lesson of Watergate is not that the Constitution worked. It is that it failed spectacularly.

Except for one thing: It didn’t. In fact, the real lesson of Watergate is not that the Constitution worked. It is that it failed spectacularly. Contrary to the myth, Nixon’s resignation was anything but the inevitable consequence of a powerful constitutional juggernaut.

Rather, it was the consequence of a bizarre, highly improbable series of events that was more reminiscent of Rube Goldberg than James Madison or Alexander Hamilton (Goldberg being the cartoonist who drew elaborate machines that performed the simplest task by setting off a long, complicated chain reaction). So if you’re thinking (dreaming) that crazy King Donald will be deposed by our vaunted checks and balances, consider first that if the political system really worked, a narcissistic man-child like Trump could have never gotten to the presidency, and second, that the Constitution is a shoddy and inadequate contraption unsuitable for ridding us of narcissistic man-children.

Simply put, don’t count on it.

I don’t know if Trump colluded with the Russians to win the election or if he is conducting a cover-up of his minions’ actions. New York Times columnist Charles Blow wrote that Trump’s machinations either indicate concealment or insanity. I would actually bet on the latter. But even if he is guilty — even if he has a smoking gun in his hand — it would still take Rube Goldberg to oust him. So says Watergate.

Let’s begin at the beginning. It is incontrovertible that President Richard Nixon connived to pay off the Watergate burglars so that they wouldn’t squeal and that he approved of an elaborate system to halt the investigation that could lead from the burglars to his Committee to Re-Elect the President. But to get from there to a possible impeachment and the resignation that obviated the necessity for the impeachment was a long and tortuous road.

If the pugnacious senior justice on the District of Columbia Federal Court, John Sirica, hadn’t appointed himself to preside over the burglars’ trial; and if Sirica hadn’t expressed his skepticism that the crime ended with the Keystone Cops who stood before him; and if that skepticism hadn’t led Sirica to pressure the defendants to turn on the higher-ups responsible; and if one of those Cops, James McCord, hadn’t accepted Sirica’s invitation to do so and hadn’t written him a letter exposing the hush money…

And if two enterprising Washington Post reporters, Bob Woodward and Carl Bernstein, hadn’t sniffed a larger conspiracy and began unearthing it; and if The Post’s managing editor Howard Simons, the paper’s executive editor Ben Bradlee and its owner Katharine Graham hadn’t supported them against enormous pressures and threats from the administration; and if the media hadn’t picked up the story instead of ignoring it; and if FBI Deputy Director Mark Felt hadn’t decided to leak information on the Watergate investigation to Woodward and Bernstein, thus keeping the story afloat; and if, despite the 1972 Nixon landslide, Congress hadn’t been in Democratic hands, allowing a Senate investigation that would have never occurred under Republican rule; and if the chairman of the Senate Select Committee hadn’t been a canny old conservative Southerner named Sam Ervin, who looked like anything but a hardened partisan out to get Nixon …

And if the House Judiciary Committee hadn’t wrung a promise from Attorney General Eliot Richardson that he would appoint a special prosecutor; and if Richardson hadn’t appointed Archibald Cox, a man of impeccable character and integrity; and if Nixon himself hadn’t recorded his conversations; and if, during those Senate hearings, John Dean, White House counsel, hadn’t hypothesized that Nixon might have been taping conversations, which prompted committee staff to make that query of every witness; and if a Nixon deputy assistant named Alexander Butterfield hadn’t then revealed the recording system and the tapes; and if Cox hadn’t then subpoenaed the tapes; and if Sirica hadn’t ordered the White House to honor the subpoena; and if Nixon hadn’t poured gasoline on the Watergate fire by refusing to honor the subpoena; and if Nixon hadn’t ordered Attorney General Richardson to fire Cox; and if Richardson hadn’t resigned rather than do so; and if the deputy attorney general, William Ruckleshaus, hadn’t also refused to fire Cox; and if the odious solicitor general, Robert Bork, as now acting attorney general, hadn’t finally fired Cox, touching off a firestorm; and if Cox hadn’t reacted to his firing so temperately that partisan hostilities weren’t enflamed; and if Sen. Howard Baker (R-TN) hadn’t been the ranking minority member on the Select Senate Committee investigating Watergate and reluctantly allowed to follow the trail where it led rather than take the partisan approach and resist it …

Too many ifs. And that is precisely what Trump is counting on to derail the Russian investigation.

Trump can’t help but notice that almost everything that led to Nixon’s demise was extra-constitutional: the media’s diligence, the cooperation of leakers, the probity of the individuals investigating him, the conscience of the judges and of the appointed officials like Richardson and Ruckleshaus, who eschewed partisanship for patriotism, and finally the public pressure that got the Republicans to cave. In short, there was nothing inevitable about it, which also means it is very unlikely to be replicated.

Republicans, then as now, were determined to defend their man and throw every monkey wrench they possibly could to stall the investigation. The other day I heard some pundit wax rhapsodically about how Sens. Barry Goldwater (R-AZ) and Hugh Scott (R-PA), and Rep. John Rhodes (R-AZ) marched to the White House to deliver Nixon the news that the jig was up and he would have to resign, as if these three wise men were putting country over party.

That is a lot of bull roar. Those wise men only gave Nixon their verdict after he finally was outed as having approved a cover-up, which is to say long after the public had already turned decisively against him. By May 1973, for the first time, more Americans disapproved of him than approved of him. By the end of the year, that disapproval was well above 60 percent.

The handwriting wasn’t only on the wall for Republicans. It covered the wall. But even then, they didn’t run from Nixon. They crawled from him. Remember: It took more than two years for Watergate to play out. Two years. Again: the system didn’t work.
– Sen. James Risch on PBS NewsHour

Back to present day: Trump can pretty much count on Republicans’ support, unless his approval ratings continue to nosedive, because Republicans are largely hypocrites and because there are no Howard Bakers anymore (not that Baker was a paragon), or anyone on the Republican side for whom collusion with the Russians would outweigh dismantling the welfare state. On Tuesday, Sen. James Risch of Idaho told the PBS NewsHour that Trump should be “commended” for giving classified intelligence to the Russians and that the investigative focus should be on finding the “traitor” who leaked the story to The Washington Post. Not exactly a profile in courage.

What’s more, Nixon didn’t have Fox News, Limbaugh and Drudge to fight back on his behalf. Trump does. And don’t count on public pressure from the right. While Trump’s approval ratings are historically low — at roughly the same level as Nixon’s during the Watergate hearings — there is still that core that sticks with him, 82 percent of rank-and-file Republicans. They pose a threat to any Republican officeholder who breaks with Trump because they are likely to abandon them before they abandon him.

And as for those honorable men and women of conscience, well, we have only to look at Deputy Attorney General Rod Rosenstein to see how imperiled they are. In just a day, Rosenstein sullied a nearly 30-year reputation as a sterling public servant by drafting a shockingly phony excuse for Trump’s firing of FBI director James Comey — an excuse that Trump undermined the next day.

Apparently, integrity isn’t what it used to be. And remember that the hopelessly compromised Rosenstein, who has already said he sees no need for a special prosecutor, would be charged with appointing one. And as for a new FBI chief to head the investigation? Well, of course, Trump will appoint him or her. And finally there is this: unlike Nixon, Trump ain’t leaving unless he is booted out.

So don’t count on some moderate Republican or some high-minded career prosecutor or some unimpeachable judge or some FBI leader or some administration whistle-blower or the Supreme Court or the Constitution or even Rube Goldberg to save us from Trump. We got lucky once — very, very lucky. We aren’t likely to be that lucky again.

Neal Gabler is an author of five books and the recipient of two Los Angeles Times Book Prizes, Time magazine’s non-fiction book of the year, USA Today’s biography of the year and other awards. He is also a senior fellow at The Norman Lear Center at the University of Southern California, and is currently writing a biography of Sen. Edward Kennedy.