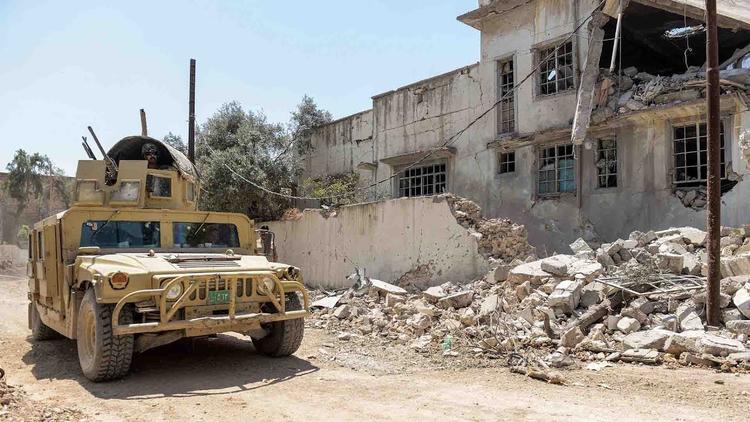 The Iraqi government’s next big problem is coming into view: The group of powerful Shiite Muslim militias loyal to Iran seem to want to keep the country enmeshed in regional turmoil.

As the extremist group known as the Islamic State is driven out of the country, the Iraqi government is facing up to a new threat to its authority – this comes from the Shiite Muslim militias, once volunteers who came together to defend their towns against the Islamic State but who have since turned into a formidable, quasi-official fighting force.

The Shiite Muslim militias themselves are divided into three main groups, with some professing loyalty to the Iraqi government and the Shiite Muslim religious authorities in Najaf, while others openly admit they take orders from neighbouring Iran and Iranian clerics. A third group is affiliated with the Iraqi clerics, Muqtada al-Sadr or Ammar al-Hakim.

The factions loyal to Iran differ from the others in that they are the most well-armed and more powerful than the others. They are called the Walaei militias – the word means “loyal” – and they say that they prefer to obey Iran’s spiritual leader, the Ayatollah Ali Khamenei, and that they see Iraq and Syria as one military front, where they will continue to fight even after the Islamic State, or IS, group has been expelled.

I can openly say that we do not take our orders from the Iraqi government. We are ready to fight in Syria, Lebanon and Yemen, or any other country where there are terrorists.

One of the around 20 different groups associated with the Walaei militias is the Khorasani Brigade, who are closely associated with Iranian General Hamid Taghavi, a member of the Iranian Revolutionary Guard, who was killed fighting the IS group in northern Iraq in late 2014. Alongside pictures of Taghavi, the faction has idolizing pictures of Khamenei in its headquarters and on their military vehicles.

“I can openly say that we do not take our orders from the Iraqi government,” says Abu Hassan al-Atabi, one of the members of the brigade, speaking to NIQASH on the phone. “We fought in Iraq during these difficult times and we have fought to prevent the fall of Baghdad [to the IS group]. We will be present even after the extremists have been pushed out. The IS group is just one of our challenges,” he continued. “The conflict in the Middle East continues and we are ready to fight in Syria, Lebanon and Yemen, or any other country where there are terrorists.”

These kinds of ambitions mean that pro-Iranian militias are becoming more and more of a problem for the Iraqi government. At the end of last month, Iranian loyalist militias almost connected with the Syrian army and pro-Iranian militia groups in Syria, on the Iraqi-Syrian border. There were some fears that when the two sides met, they would open a land corridor, that would, as the Washington Post reported, “give Tehran control of a large swath of the Syrian-Iraqi border, securing a land route through Iraq and across southern Syria to its proxy, ­Hezbollah, in Lebanon”. Coalition aircraft flew overhead and dropped leaflets asking the militias to leave the border area.

In a mid-May speech, Qais al-Khazali, head of the pro-Iranian League of the Righteous militia, said that, “we will reach the borders with Syria and our brothers in Syria are getting closer to the borders too. In this way, we, the Shiite Muslim militias, the Iranian Revolutionary Guard, the Lebanese Hezbollah and the Houthi movement [of Yemen] are going to establish the Shiite crescent”.

In March this year, another pro-Iranian militia, Harakat al-Nujaba, announced they were forming a special unit called the Golan Heights Liberation brigade. This refers to the Golan Heights, which belonged to Syria until 1967, after which Israel took control of the area. The Iraqi militia said it was willing and able to take back the Syrian territory from Israel.

“The Iraqi government is in an embarrassing position because of the pro-Iranian faction,” a senior government official told NIQASH, off the record. “The US spoke directly with Prime Minister Haider al-Abadi and urged him to maintain control of these factions and to try and keep them away from Iranian influences. But that is very hard to do.”

It had been proposed that the volunteer militias be absorbed into the regular Iraqi army and police but this is far from happening in reality. Pro-Iranian factions are very popular and influential in Iraq at the moment, particularly in Baghdad and in southern provinces. They have large offices that are similar to regional police stations and if the regular army and police are not busy trying to avoid any contact with the groups, then they are likely to be currying favour with their leaders in order to avoid any kind of neighbourhood conflict.

The pro-Iranian Shiite Muslim militias in Iraq actually date back to 2003, and the US-led invasion of Iraq that removed Saddam Hussein from power. Back then, Iraq’s supreme Shiite Muslim religious authority, Ali al-Sistani, resisted pressure to tell the Iraqi people to fight US forces in the country. Instead he asked them to remain neutral. It was then that Iran took advantage of another influential, and much younger, cleric’s desire to fight the US. That was Muqtada al-Sadr, who benefitted from Iranian influence and largesse with the creation of the Mahdi army, basically an army of followers of the cleric and his family that is now known as the Sadrist movement.

The Mahdi army is the spiritual ancestor of the Shiite Muslim factions who are loyal to Iran to this day, says Hamid al-Taei, a cleric who teaches in a Najaf religious school, adding that, “this conflict dates back to al-Sadr choosing to fight the US troops, and receiving military aid from Iran to do so.”

When al-Sadr decided it was time for the Mahdi army to put down its weapons and chose to publicly distance himself from Iranian influence, some of his senior aides defected and formed another militia of those who wished to continue fighting. One of these was the League of the Righteous, headed by al-Khazali today. Since 2014, the number of militias who have pledged allegiance to Iranian religious authorities, rather than Iraqi ones has grown, al-Taei explains.

After Iraqi religious authority Ali al-Sistani called for volunteers to fight against the IS group in mid-2014, al-Taei says that the pro-Iranian factions basically executed a sort of coup against al-Sistani, taking advantage of that call to form more military units that they would be able to continue to influence.