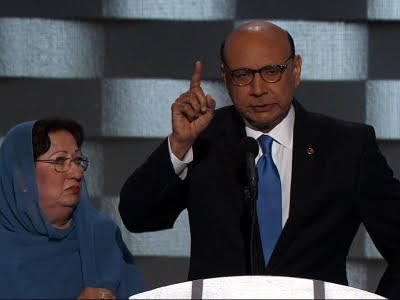 “The father of Humayun Khan, a Muslim American soldier who died during his service, questioned Donald Trump’s patriotism at the Democratic National Convention, asking him whether he had read the United States Constitution. (July 28, 2016)”

Khizr Khan’s speech at the DNC:

“Tonight we are honoured to stand here as parents of Captain Humayun Khan and as patriotic American Muslims – with undivided loyalty to our country.

Like many immigrants, we came to this country empty-handed. We believed in American democracy; that with hard work and goodness of this country, we could share in and contribute to its blessings.

We are blessed to raise our three sons in a nation where they were free to be themselves and follow their dreams.

Our son, Humayun, had dreams too, of being a military lawyer, but he put those dreams aside the day he sacrificed his life to save the lives of his fellow soldiers. Hillary Clinton was right when she called my son ‘the best of America’.

If it was up to Donald Trump, he never would have been in America. Donald Trump consistently smears the character of Muslims. He disrespects other minorities; women; judges; even his own party leadership.

He vows to build walls, and ban us from this country. Donald Trump, you’re asking Americans to trust you with their future.

Let me ask you: have you even read the United States constitution? I will gladly lend you my copy. [he pulls it out] In this document, look for the words ‘liberty’ and ‘equal protection of law’.

Have you ever been to Arlington Cemetery? Go look at the graves of brave patriots who died defending the United States of America.

You will see all faiths, genders and ethnicities. You have sacrificed nothing and no one.

We cannot solve our problems by building walls, sowing division. We are stronger together. And we will keep getting stronger when Hillary Clinton becomes our President.

In conclusion, I ask every patriot American, all Muslim immigrants, and all immigrants to not take this election lightly.

This is a historic election, and I request to honour the sacrifice of my son – and on election day, take the time to get out and vote.

And vote for the healer. vote for the strongest, most qualified candidate, Hillary Clinton, not the divider. God bless you, thank you.”