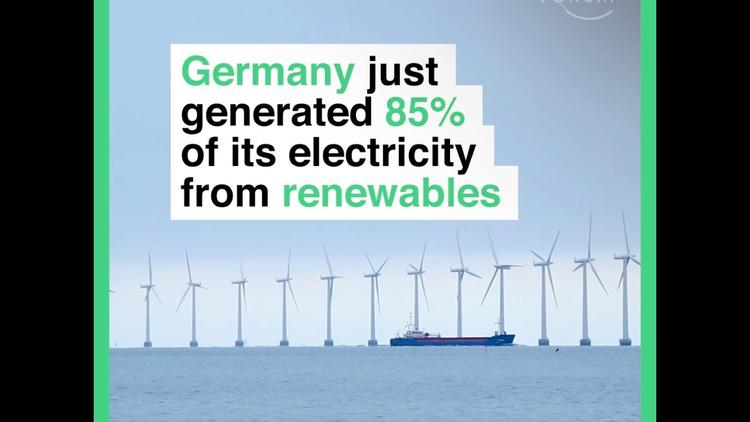 So far this year, over a third of German electricity has come from wind, solar, biomass and hydro, at 35%. That is 2 percentage points higher than in 2016.

The percentage for the US is only 15%.

Germany still has a long way to go to be green. Electricity production is not the only sector that burns fossil fuels and produces toxic carbon dioxide gas. Most heating in Germany is done by natural gas, which produces an unfortunate national dependency on the Russian Federation, and perhaps in the near future, Iran. And the transportation sector is only 5% green.

Germany should look to the Norway model for encouraging consumers to buy electric cars via tax policy. Some 42% of all new automobiles bought this year in Norway have been electric , so that the country is near a tipping point where half or more of new car sales will be EVs.

VW’s e-Golf is already a popular vehicle, as is the BMW i-3. Porsche and BMW have new electric models on the way, so Germany would benefit economically from EVs. (BMW was going to make its electric “Mini” at its plant in Oxford, the UK, but because of BREXIT has put those plans on hold, until it knows exactly what the tariff policies will be.)

In fact, Porsche plans for 50% of its production to be electric vehicles within 6 years. I can’t wait to tell my wife that for the good of the planet, we are just going to have to sacrifice and get a Porsche Mission E.

EV and Plug-in Hybrid sales are up 48% year over year in the European market, and up 27% since Jan. 1. They still form a small percentage of over-all sales in Europe, unlike in Norway.

Germany is the champion among industrialized economies in going green. My own suspicion is that its stated goals are too conservative and it will meet them long before it expects to. The goal is 80% of power in all sectors to come from renewables by 2050. Even that would be a magnificent achievement, and if everybody did it we could hope to stay below 3.6 degrees F. extra warming. But I predict that Germany will get to 100% renewables well before 2050.

The US, I’m not so sure, just because it is a much more corrupt political system and a much less critical and analytical political culture. Germans, having lived through the disasters of Nazism, are careful about corporatism and other abuses that seem unexceptional to Americans. If German energy corporations tried to buy the chancellor and install a gas CEO as minister of the environment, people in Berlin would be at barricades, but the equivalent has just been done in the US and there were a couple of fleeting marches.

World Economic Forum: “Germany just generated 85% of its electricity from renewables” [on one day this spring]