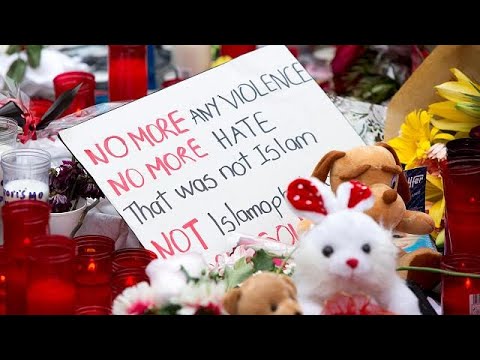 The crowd chanted slogans such as “Islam is peace!” and “They are not Muslims, they are terrorists!”

In the wake of two attacks in Catalonia this week, claimed by the Islamic State group, Barcelona’s Muslim community gathered to denounce the incidents.

Chanting “Islam is peace!”, “Not in our name!” and “They are not Muslims, they are terrorists!” , the crowd of about a hundred demonstrated at the Spanish city’s Canaletas Fountain.

On Thursday, a van hit pedestrians strolling in the Las Ramblas avenue, killing 13 people and injuring some 130 others.

Hours later, a car was driven into a crowd in the coastal town of Cambrils. One woman was stabbed to death when the five attackers jumped out of the vehicle. They were then shot by the police. Four died at the scene, the fifth, later in hospital.

Spain’s Interior Minister Juan Ignacio Zoido has said that the terrorist cell behind both attacks had been dismantled.

The police are still searching for Younes Abouyaaqoub and believe there may be other arrests in the coming days.

The 22-year-old is suspected of driving the van into the crowds in Las Ramblas before escaping on foot.

Catalan’s Moroccan community is particularly concerned after it was revealed that four of the main suspects, including Abouyaaqoub, had roots in Morocco.

“There is a lot of fear, people don’t go out. Very few people come to pray. Normally we are about 40 people, last night we weren’t even 15 and this morning 10,” Raja Miah, an imam at a smallmosque in the city, who moved to Barcelona nine years ago from Bangladesh, told Vanguard.

Miah said he was stopped by authorities while leaving the Las Ramblas area on Thursday and questioned because he was wearing a robe and has a beard.

“We fear that the same will happen here as in France, Britain or other places,” Islam Zahid, another member of Barcelona’s Muslim community told Vanguard, referring to the rise of far-right parties in parts of Europe.