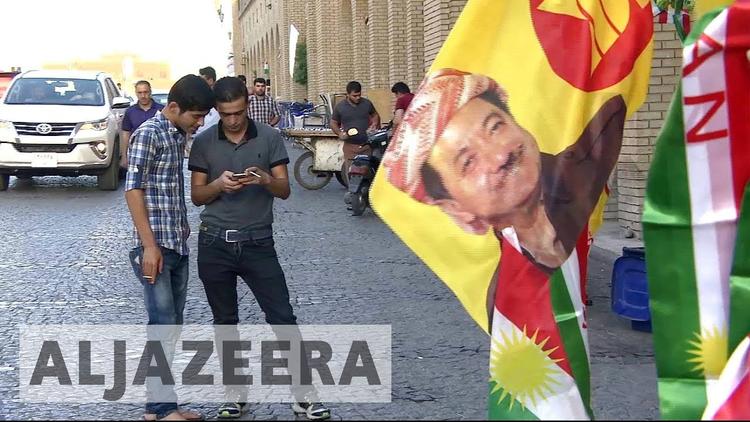 The Kurdistan referendum held today is probably not as likely to produce immediate turmoil in the Middle East as some pundits would have it. The “Domino Theory” that if the Kurds secede from Iraq then they will secede from Turkey, Iran and Syria as well, may be as incorrect as the idea that a Communist victory in Vietnam would lead to Communist domination throughout Asia and the world.

Iraqi Kurds have a particular history that has led to today’s referendum that is not exactly replicated in other countries with large Kurdish minorities (Iran, Turkey and Syria). Kurds are about 22% of Iraq’s 32 million people. Although nearly 80% of Iraqis are Arabs, Kurds speak an Indo-European language close to Persian and distantly related to English. They are mostly Sunni Muslims, but favor Sufi mystical trends or secular-minded approaches to religion. They reject for the most part Arab-style fundamentalism.

The Ottoman Empire ruled what is now Iraq from the 1500s until World War I, and had all sorts of arrangements there. Sometimes it was a single province, sometimes it was 4 provinces– one of them more or less today’s Kurdistan.

The British conquered what is now Iraq during the course of WW I, invading from British India with British Indian troops. They only went up north to Kurdistan because they were trying to rendezvous with and give help to the Tsarist Russian army that was fighting the Ottomans in Kars. It was not initially clear that Mosul, a multicultural city in the north, would go to British Iraq as opposed to Turkey or French Syria.

Once it became clear that the victorious European Great Powers– Britain, France and Italy– would refuse to grant Iraq independence and would make it a British Mandate (i.e. colony), discontent immediately manifested itself in the great 1920 revolt. In the north, from 1919, Kurdish leader Mahmoud Barzinji led a series of revolts against the British, which were finally put down in 1924. Britain never really controlled Iraq in the 1920s, including Kurdistan, and only managed to stay there by intensively bombing it from the air. The British created the Hashemite monarchy for Iraq, and handed some power to it in 1932.

Unrest in Kurdistan was endemic. The Barzani clan led guerrillas seeking independence. In 1946 Mustafa Barzani, having crossed over to the Iran side, briefly led the Mahabad Republic, supported by the Soviet Union, before it was reabsorbed into Iran as the latter became an American sphere of influence.

The 1968 Baath Party coup in Iraq proved fateful. The faction of Baathists who came to power in 1968 were largely Sunni Arabs and were Arab nationalists. They ideally would have liked to create a United States of Arabia, only with a one-party state–that of the Baath Party. The Baathists were hostile to non-Arab minorities unless the latter were willing to speak Arabic and consider themselves Arab. In the early 1970s, Iran and the US encouraged Kurdish unrest in northern Iraq, in hopes of destabilizing the Baath regime, which titled toward the Soviet Union and joined the rejectionist states opposed to Israel’s existence.

In 1975 Baathist Iraq and the shah’s Iran reached a diplomatic resolution of many outstanding issues. As a result, Henry Kissinger informed the Kurds that the US was dropping them.

That agreement broke down in 1979 because of the Khomeinist revolution in Iran, which deposed Muhammad Reza Pahlevi and created an avowedly Shiite revolutioanry state that hoped Iraqi Shiites would also rise up.

The resulting Iran-Iraq War of 1980-1988 presented the Kurds with an opportunity to make a play for more autonomy. The Saddam Hussein Baathist regime saw these moves as a form of treason. Saddam then had “Chemical Ali” al-Tikriti, one of his generals, target the Kurdish town of Halabja with sarin poison gas. Some 5,000 died. That was the moment when Iraq lost the Kurds.

The Gulf War put another piece of the puzzle in place. In 1990, Saddam annexed Kuwait. George H. W. Bush put together a coalition to kick him back out of the small Gulf emirate. In spring of 1991, after the withdrawal of Iraqi forces from Kuwait, Bush Sr. encouraged uprisings against the Baath by Iraqis. The Shiites and the Kurds both mounted substantial revolts in Mar.-April 1991.

When Saddam Hussein threatened to send tanks into Iraqi Kurdistan and to take revenge, Kurds fled to the mountains, where Saddam’s tanks and artillery pieces could not reach them. The problem is that there wasn’t food up there and a million people fled, so that there could have been famine. Bush Sr. organized a relief effort and put in a no-fly zone over northern Iraq.

Under the no-fly zone, 1991-2003, Iraqi Kurdistan de facto seceded from Iraq. Arabic was no longer taught in the schools. Everything was in Kurdish. The Iraqi government could not lay a hand on them. They merged their 3 provinces into one administration and elected a parliament.

The 2003 US invasion depended heavily on Kurds and Shiites. Kurds were happy about being rescued from the Baath Party, but afraid the Americans would put them back under Baghdad. They managed to retain semi-autonomy, however. The US found the Kurdistan paramilitary, the Peshmerga, among the few efficient local fighting forces. One problem is that the young Kurdish men did not know Arabic.

Under the US occupation, Iraq began having parliamentary elections. But the parties were all ethnic and religious. The Shiite majority had Shiite fundamentalist parties. No Kurds voted for them. Kurdistan had the Kurdistan alliance. Iraq’s inability to develop a nation-wide party built on something other than ethnic or religious solidarity. From 2006, the ruling party has been the fundamentalist Shiite Da’wa Party. No Kurds vote for it or want to see Shiite law as the basis for Iraqi law.

In 2014, the Iraqi army collapsed and ran away from a few thousand ISIL fighters and abandoned Mosul and northern Iraq. Kurdistan no longer even had a border with Iraq proper. In the absence of an Iraqi army, Kurdish Peshmerga were left to fight and advancing ISIL themselves, though President Obama gave them air support.

So these events, Baath regime poison gass attack in 1988, the No-Fly zone of the 1990s, and the rise of ISIL in 2014, all contributed to the Iraqi Kurds’ decision to secede.

But these events did not occur in Turkey, a country of 75 million that is 20% Kurdish. Turkey’s Kurds have migrated for work throughout the country and opinion polling never used to, at least, show significant secessionist tendencies (current president Tayyib Erdogan seems determined to change their minds by sending in army tanks to raze their villages. Kurds are about 20% of Turkey’s population).

The romantic European conception of nationalism as based on ethnicity (they would have said “race”) and language is silly. Many countries are bilingual or multilingual, and there is no such thing as “race” in the 19th century sense.

India has 16 major languages and further smaller ones. Afghanistan is made up of Pushtuns, Uzbeks, Tajiks, Hazaras and others. Iranians speak Persian, Turkmen, Qashqa’i, Baluch, Lur and Arabic.

It isn’t ethnicity and language that creates states but history. The history of Iraqi Kurds has driven them in this separatist direction. You can’t assume that it will happen everywhere there are Kurds.