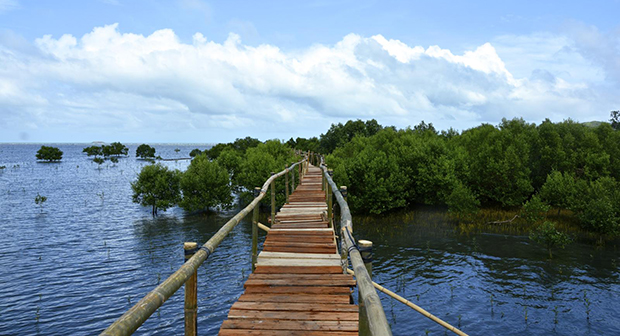 ROME (IPS) – With 30 countries from Kenya to Indonesia and from Canada to Brazil now involved in the world campaign to beat pollution by countering the torrents of plastic trash that are degrading oceans and endangering the life they sustain, the UN has strengthened its massive efforts to clean up the seas, which are the Earth’s main buffer against climate change.

The 30 countries – all members of UN Environment Programme (UNEP)’s #CleanSeas campaign – account for about 40 per cent of the world’s coastlines–they are drawing up laws, establishing marine reserves, banning plastic bags and gathering up the waste choking their beaches and reefs. 1. Trapping carbon: Mangroves, coral reefs, salt marshes and sea-grasses make up just 1 per cent of the ocean’s seabed, but they contain between 50-70 per cent of the carbon stored in the oceans.
– Like forests, marine ecosystems take greenhouse gases out of the atmosphere and trap them, some of it for thousands of years. As such, these ecosystems are known as “blue carbon sinks.”

2. Reducing coastal erosion: Overtime, waves carry away sediment from the shore. When this happens more quickly or forcefully, for example because of large storms, it has the potential of causing major damage to homes and coastal infrastructure.
– Sea grasses may look like our grass fields on land, but they are actually flowering plants that live in the salty environments of the sea floor and help hold sediment in place. Salt marshes, mangroves and coral reefs also help in slowing erosion and protecting shorelines.

3. Protecting marine life and biodiversity: Coral reefs occupy less than 0.1 per cent of the world’s ocean surface, yet they provide a home for at least 25 per cent of all marine biodiversity. Often popular tourist attractions, coral reefs are the least secret of the ocean’s secret weapons. They draw people in to observe the wealth of marine life that they host.
– However, coral reefs are delicate ecosystems that are increasingly strained by human activity. Careless tourism, water pollution, overfishing, rising temperature and acidity are all damaging these ecosystems, sometimes beyond repair.

4. Forming barriers to storms: Mangroves, salt-tolerant shrubs or small trees that grow in saline water of coastal areas, create barriers to destructive waves and hold sediments in place with their underwater root systems. This protects coastal communities in times of cyclones or other tropical storms.
– In fact, scientists concluded that mangroves could have reduced the damages caused by the 2008 Nargis cyclone in Myanmar, where parts of the coastline had lost up to 50 per cent of its mangrove cover.

5. Slowing down destructive waves: Salt marshes are coastal wetlands that are flooded and drained by salt water brought in by the tides. Salt marshes are well-known for protecting the coast from soil erosion.
– However, they are also an effective defence against storm surges and devastating waves. Salt marshes can reduce wave sizes by up to 20 per cent.
– As the waves move through and around these marshes, the vegetation quells the force of the water and buffers the effects of these waves on coastal communities, FAO reports, adding that once viewed as wastelands, salt marshes can rival tropical rainforests in terms of biologically productive habitats, as they serve as nurseries and refuges for a wide variety of marine life.

SOURCE: FAO’s Guide to the Ocean

The populous nations of East and South-East Asia account for most of the plastic trash entering the global ocean, UNEP reports, adding that in order to address this menace at its source, Indonesia has pledged to reduce its generation of plastic trash by 70 per cent by 2030, while the Philippines plans new laws targeting single-use plastics.

Humanity’s unhealthy addiction to throwaway plastics bags is a particular target, the UN environment agency warns, while informing that countries including Kenya, France, Jordan, Madagascar and the Maldives have committed to banning plastic bags or restricting consumers to re-usable versions for which they have to pay. See: Plastic No More… Also in Kenya

“Legislation to press companies and citizens to change their wasteful habits is often part of broader government strategies to foster responsible production and consumption – a key step in the global shift toward sustainable development.”

According to UNEP, Belgium and Brazil, for instance, are both working on national action plans to curb marine pollution. Costa Rica has embarked on a five-year strategy to improve waste management that includes a push to reduce the use of plastics.

The flow of pollution means detritus such as drink bottles and flip-flops as well as tiny plastic fragments including micro-beads used in cosmetics are concentrating in the oceans and washing up on the most remote shorelines, from deserted Pacific islets to the Arctic Circle, the UN specialised body informs.

“Humans have already dumped billions of tonnes of plastic, and we are adding it to the ocean at a rate of 8 million tonnes a year,” UNEP warns, adding that as well as endangering fish, birds and other creatures who mistake it for food or become entangled in it, plastic waste has also entered the human food chain with health consequences that are not yet fully understood.

The #CleanSeas campaign aims to “turn the tide on plastic” by inspiring action from governments, businesses and individuals on ocean pollution. See also: UN Declares War on Ocean Plastic

Pollution is the theme of the 2017 United Nations Environment Assembly, which is meeting in Nairobi, Kenya from 4 to 6 December. The Main Buffer against Climate Change

Another UN agency reminds that while it is well known that forests, especially rainforests, are key allies in the fight against climate change as they absorb greenhouse gas emissions, oceans are the earth’s main buffer against it.

In fact, about 25 per cent of the greenhouse gases that we emit actually gets absorbed by the oceans, as does over 90 per cent of the extra heat produced by human-induced climate change, the UN Food and Agriculture Organization (FAO) reports.

“However, oceans are also one of the most affected by it.”

According to the Rome-based UN agency, human activities are resulting in acidification and increasing water temperatures that are changing our oceans and the plant and animal life within them.

The UN estimates that there will be more plastic than fish in the ocean by 2050 – with over 5 trillion pieces of plastic weighing more than 260,000 tonnes currently floating in the world’s oceans. Meanwhile, harmful fishing subsidies that contribute to overfishing are estimated to be as high as 35 billion dollars.

Coral reefs and coastal environments in tropical regions, including mangroves and salt marshes, are in particular danger, warns the UN food and agriculture agency.

“These ecosystems store much of the carbon, which then remains in the oceans for hundreds of years, and are thus one of our “allies” against climate change.”

“Right when we need them the most, we are losing these crucial ecosystems.”

Did You Know That…

FAO tells some key facts about the oceans:

— The ocean has it all: from microscopic life to the largest animal that has ever lived on earth, from the colourless to the iridescent, from the frozen to the boiling and from the sunlit to the mysterious dark of the deepest parts of the planet.

— The ocean is the largest ecosystem on earth and provides 99 per cent of the living space for life. It is a fascinating, but often little explored place.

— The ocean affects us in many different ways. It provides us with an important source of food and other natural resources. It influences our climate and weather, provides us with space for recreation and gives us inspiration for stories, artwork and music.

— The list of benefits we get from the ocean is almost endless! But we are also affecting the ocean.

— Our waste is found in massive floating garbage patches and plastics have been found from the arctic to the bottom of the deepest places in the ocean.

— Climate change and its related impacts, such as ocean acidification, are affecting the survival of some marine species.

— We need a clean and healthy ocean to support our own health and survival, even if we don’t live anywhere near it.

Now you know! It would good to also remember that humankind managed to survive over millions and millions of years… without plastic!