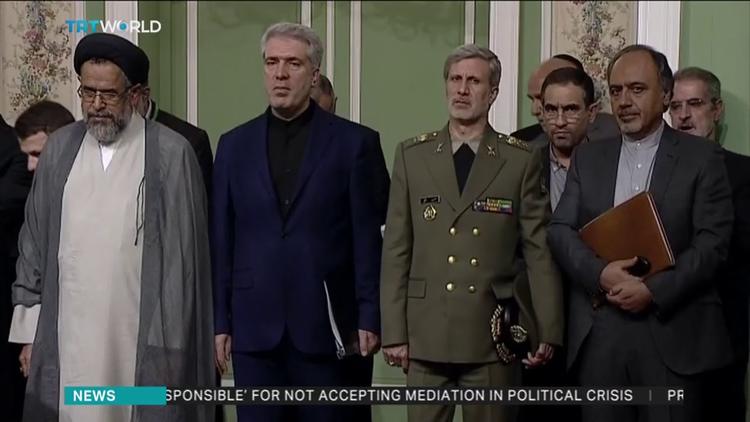 “The only beneficiaries are the Zionist regime and the U.S.,” Ayatollah Khamenei said.

Warning against alleged foreign plots, the leaders of Turkey and Iran said harsh measures would be taken against Iraqi Kurdistan to maintain Iraq’s territorial integrity from attempts to secede from Baghdad following an independence referendum.

The Iranian President Hassan Rouhani, speaking in a televised press conference with his Turkish counterpart, Recep Tayyip Erdogan, called on Kurdish leaders to reverse their decisions or else Iran and Turkey would have no choice but to impose harsh and necessary measures.

“Some foreigners plan to split the area to increase ethnic and sectarian discrimination. Both countries do not accept such acts of discrimination,” Rouhani said. “As far as we are concerned, Iraq is one single country. We do not accept any geographical changes. ”

“But the people of Iraqi Kurdistan are our good neighbors, are our dear brothers. We do not want them to experience any pressure, we do not wish to exert this pressure,” Rouhani added, noting that Kurdish officials’ decision to proceed with the referendum lies at the root of the regional dispute.

Erdogan, for his part, said that measures have already been taken against Iraqi Kurdistan, but even stronger ones would be imposed.

“What is the referendum organized by northern Iraq’s regional administration for? No country in the world apart from Israel recognizes it. A decision made at the table with Mossad (the Israeli spy agency) is not legitimate, it is illegitimate,” the Turkish president said.

Speaking at a joint presser following the meeting between the two presidents, Rouhani asserted that “Iran and Turkey as the two Muslim, friendly, and powerful countries of the region are the anchors of stability in the Middle East.”

Both Tehran and Ankara have rejected the referendum held in Iraqi Kurdistan on September 25 and have taken several economic and security measures to back the federal government in Baghdad, including large-scale military exercises.

During a subsequent meeting with Erdogan, Iran’s supreme leader Ayatollah Ali Khamenei, said that the United States and Israel were behind the referendum.

“The United States and foreign powers are unreliable and seek to create a ‘new Israel’ in the region,” Khamenei said. “This is a threat to the future of the region.”

“The US and the European administrations’ attitude toward the issue is different from Iran and Turkey’s,” he added. “The US intends to have a tricky agent against Iran and Turkey, so the stance of the Americans and the Europeans should not be trusted at all … As you mentioned the only beneficiaries of the recent developments are the Zionist regime and the U.S., respectively.”

On Wednesday, Erdogan arrived in Tehran on a visit aimed at bolstering bilateral relations with Iran, as well as the common stance on Iraqi Kurdistan.

The visit’s main agenda item is economic cooperation, but the Kurdistan referendum was also included in the discussion.

The Turkish president supported the goal of raising Turkish-Iranian trade volume to $US30 billion.

Erdogan and Rouhani agreed to expand bilateral cooperation and protect the unity of Iraq.