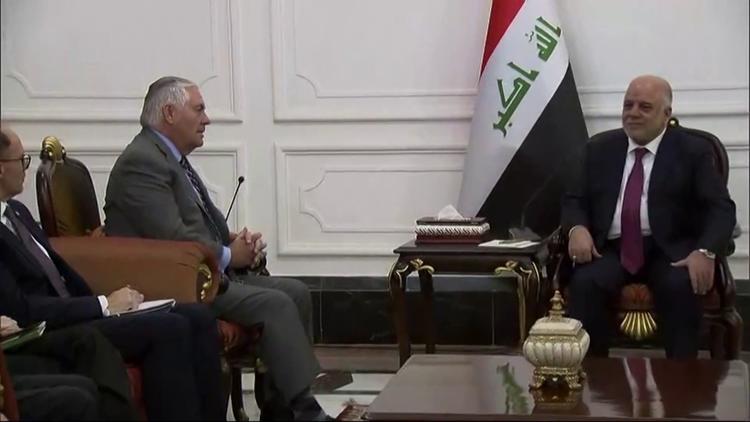 The US are occupiers, say some of Iraq’s militias. The militias need to disband, say US diplomats. Stuck in the middle is the Iraqi government, caught between two forces, both of which it needs to survive.

The Iraqi military is moving towards victory in Al Qaem, the last remaining Iraqi stronghold of the extremist group known as the Islamic State. But as a final victory approaches, several new conflicts are looming. One of these involves growing tensions inside Iraq between two of the countries’ allies, the US and Iran.

The Iraqi government must find a balance, dealing with the increasingly important Shiite Muslim militias, who express their allegiance to Iran, and the US. They must convince a large mainly Shiite Muslim political bloc to accept the ongoing presence of US troops in Iraq and appease and restrain some of the more extreme elements within the Shiite Muslim militias.

The US supported the IS group on many fronts. But after the IS group is gone then the US forces must withdraw from Iraq, or else we will consider them an occupying force.

Over the past fortnight some of those tensions have been expressed by commentators at the highest political levels.

US Secretary of State, Rex Tillerson, earned both applause and opprobrium when he called for Iranian-backed militias and Iranian advisers, who helped to defeat the extremist Islamic State, or IS, group, to “go back home”. US diplomats also caused an uproar when they described Abu Mahdi al-Mohandes, one of the most senior commanders in the Shiite Muslim militias, with close contacts to Hezbollah in Iraq, as a “terrorist”; al-Mohandes had previously been designated a terrorist in 2009 but has played an integral part in the fight against the IS group.

Qais al-Khazali, who heads the League of the Righteous militia, one of the most extremist fighting groups in Iraq, was quick to respond. He wrote on Twitter, using his personal account, to tell Tillerson that, now defeat loomed for the extremists, the US forces in Iraq had no excuse to be there any longer and that they should get out.

Most of the Shiite Muslim political parties also condemned the US’ statements and al-Mohandes was defended on all sides, even though he has close ties to Iran (which some politicians disagree with).

Caught in between the diplomats, the fighters and the rhetoric is the Iraqi government.

“We will not allow Iraq to become an arena for the US-Iran conflict again,” insists Abbas al-Bayati, a Turkmen MP and member of the parliamentary committee on foreign relations, who is close to the Iraqi prime Minister Haider al-Abadi. “We will not be part of this. We have many challenges to overcome now that the chapter on the IS group is closing. We need to rebuild the country.”

It would be almost impossible to dismantle the Shiite Muslim militias now, he continued. “They are an integral part of Iraqi security forces,” al-Bayati told NIQASH. “They are the country’s third force after the army and the police. We don’t accept the attacks on these forces. But,” he noted, “we do acknowledge that they need to be well organised and that they need to be distanced from political parties and political activism, which is in accordance with the law passed in Parliament to this effect.”

In fact, several of the senior militia commanders have said as much, when they’ve been asked about whether they or members of the militias planned to run in upcoming elections. They have said that to run for politics, any militia member must first resign from the militia.

“Additionally, the Iraqi government continues to try to strengthen the Iraqi army through training and armaments provided by the international coalition,” al-Bayati said. “But that doesn’t mean sending more US forces into Iraq. It means the US supporting Iraqi forces, to be able to prevent such threats in the future.”

The Shiite Muslim militias can be roughly divided into three different groups. The first is closely allied to Iran, the second pledges allegiance to Iraqi cleric Ali al-Sistani and the third is affiliated with Iraqi Shiite political parties, mainly the more nationalist movements headed by Muqtada al-Sadr and another cleric, Amma al-Hakim.

The militias associated with Iran are considered the best armed and most powerful and they see the fighting in Iraq and Syria as one battle front. They insist that they will remain even after the end of the IS group. The other two groups of militias are more moderate, and they tend to respect the orders given by the Iraqi government.

On the other side of this particular divide, it is thought that there are not much more than 5,000 US troops in the whole of the country right now. Most of them are involved in training or advisory tasks. While some of the leaders of the Shiite Muslim militias have made it clear they don’t like that idea, Sunni Muslim leaders in the country find the Americans to be a good counter balance to Iranian influence.

At the Ain al-Assad base in the west of Anbar province, US forces have been training Iraqis, including Sunni Muslim tribal groups and several specialized militias, the Al Saiqa and the Hamzah brigades among them. The base itself has become the largest one hosting US soldiers in Iraq, due, in part, to its distance from Shiite-dominated provinces and its proximity to the Syrian border.

“The federal government has abandoned us,” Rashid al-Malawi, one of the fighters with the Al Saiqa group, told NIQASH; al-Malawi had previously worked with the US-sponsored Awakening effort which brought local Sunnis together to combat Al Qaeda in Iraq. He has fought alongside the Shiite Muslim militias.

Al-Malawi says he and his men are getting good training from the US, but, as he readily admits, there are no that many in his group. “We participated in the fighting in Haditha and Heet and a few days ago we entered the battle for Al Qaem,” al-Malawi told NIQASH. “We did well in Al Qaem because we had good weapons. And we want the US troops to stay in Anbar after the IS group is eliminated,” he concluded.

Some of the Shiite Muslim fighters feel differently. In fact, some even say they won’t rule out fighting against US soldiers after the IS group is gone because they consider the Americans occupiers.

“The US was behind the creation of the IS group,” one militia member, Abbas al-Husseini, says – he is a member of the Martyrs of Saiyid Battalions, a militia loyal to Iranian leaders that also has men fighting in Syria for that country’s leader, Bashar al-Assad. His ideas are just one example of the sentiment that some of the militia fighters commonly express and the conspiracy theories they believe in.

“The US supported the IS group on many fronts,” al-Husseini adds. “Our country is about to put an end to the terrorists here. But after they are gone then the US forces must withdraw from Iraq, or else we will consider them an occupying force.”

US State Department: Remarks at the Office of Iraqi Prime Minister Haider al-Abadi