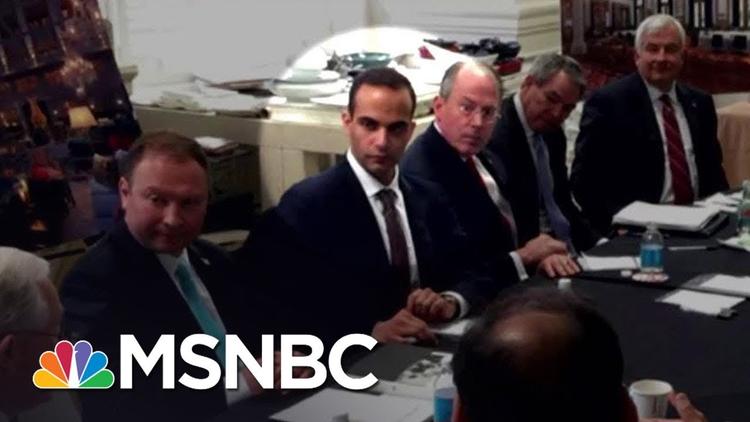 Five months into Special Counsel Robert Mueller’s investigation of cooperation between Donald Trump’s campaign and Russia during the 2016 election, Americans are seeing the first legal maneuvers in the case.

Trump’s former campaign manager Paul Manafort and his business associate Rick Gates surrendered to U.S. District Court on Oct. 30, after being indicted by a grand jury. Both pleaded not guilty to 12 counts, including conspiracy.

Hours later, we learned a foreign policy advisor to the campaign, George Papadopoulos, pleaded guilty to lying to the FBI earlier in the month.

What does all of this mean?

For those of us who study presidential elections and administrations, the indictments offer a first look at the tangled web of financial relationships among the Trump campaign staff, and a newly revealed effort by the Russians to share “dirt” – including thousands of emails – on Hillary Clinton.

What about George Papadopoulos?

The news that George Papadopoulos pleaded guilty to lying to the FBI about meetings with individuals closely associated with the Russian government during the campaign is an important development in the ongoing investigation. It establishes an additional effort by Russia to contact the Trump campaign in an effort to help Trump win the presidency.

That we only learned about that plea today, when Special Counsel Robert Mueller is indicting Donald Trump’s former campaign manager, suggests Papadopoulos’s cooperation with the investigation is problematic for the president. Mueller filed a motion calling Papadopoulos a “proactive cooperator” and urged the court to maintain secrecy because Papadopoulos had agreed to provide information relevant to an ongoing investigation of Russian interference with the election.

Manafort and Gates: What did they do?

Manafort advised the 2016 presidential campaign of Donald Trump during the summer of 2016. He abruptly departed when details of his prior dealings with Ukraine’s Party of Regions and former Ukrainian President Viktor Yanukovych were made public.

Yanukovych was president of Ukraine during the time when the Ukrainian territory of Crimea was annexed by Russia in 2014. His party, backed by Russian oligarchs and supporters, opposed NATO and used inflammatory anti-Western rhetoric that may have endangered U.S. Marines. Corruption and widespread protests ultimately led Yanukovych to flee Ukraine for Russia. Earlier this year, he went on trial for treason. The prosecution alleges he wrote a letter to Vladimir Putin, requesting that troops be sent into Ukraine.

From 2004 to 2014, Paul Manafort earned millions advising the party and burnishing its reputation in the U.S. and other Western nations. He also forged relationships with the pro-Russian oligarchs who funded the party, organizing separate private business deals that earned him more millions.

Prior to his work in Ukraine, Manafort worked for some of the most unsavory dictators around the world, including Ferdinand Marcos in the Philippines, Jonas Savimbi in Angola and Mobutu Sese Seko in Zaire.

Rick Gates is described as Manafort’s “right-hand man” in these consulting activities and during his time with the Trump campaign.

Now, they each face 12 counts, including conspiracy to launder money, failure to register as a foreign agent and knowingly making false statements under the Foreign Agents Registration Act. The most eye-catching charge is “conspiracy against the United States,” defined as “knowingly and intentionally [conspiring] to defraud the United States by impeding, impairing, obstructing, and defeating the lawful governmental functions of a government agency, namely the Department of Justice and the Department of the Treasury, and to commit offensives against the United States.”

The indictment details efforts to launder money through multiple U.S. and foreign corporations and banks. It alleges that more than US$75 million flowed through the offshore accounts Manafort and Gates established.

Manafort’s efforts to lobby U.S. government officials on behalf of the Ukrainian government required that he register and report his activities and his income. The indictment alleges that both Manafort and Gates failed to do so. When asked, they allegedly misled U.S. authorities about the nature of their activities.

Is this the silver bullet President Trump’s opponents have been waiting for to prove the president worked with the Russians during the campaign? No.

While “conspiracy against the United States” is a big bold charge, the indictment focuses on activities that occurred before Manafort joined the campaign.

Prosecutors tend to go after the small fish first, in the hopes that their cooperation will advance the case against bigger fish. Manafort is not a small fish. Are even bigger fish yet to come? The short answer is that we don’t know yet.