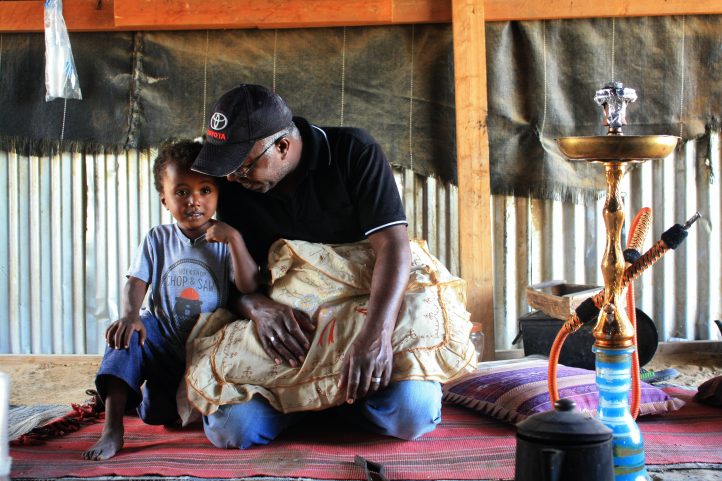 Thousands of Arab Bedouins in Israel’s Negev desert are denied power, water, sewage, and roads by the state. And their villages are under constant threat of demolition.

It’s no secret that there is an occupation happening in and around Israel.

Most people agree that the West Bank and Gaza Strip have been occupied since 1967. Much less thought and literature is dedicated to the treatment of Palestinians living inside modern-day Israel proper. I decided to head over there and see for myself.

It is commonly believed that Palestinian citizens of Israel — officially known as Arab Israelis — enjoy full equality in the Jewish State. There are Arab members of parliament, the Arab population in Israel has been growing steadily for decades, and the Arab cultural scene is thriving in places like Haifa. While all of these statements are true, Palestinians insist that occupation still exists inside the state of Israel, and nowhere is that fact more apparent than in the unrecognized Bedouin villages of the Negev desert. Before the creation of modern Israel, the Negev desert, which constitutes the southern half of the country, was almost entirely populated by Arab Bedouins. Nearly 90 percent fled during the Nakba of 1948. 11,000 Bedouins remained, a population which has now grown to over 200,000.

Of the Bedouins still living in the Negev, half live in government-designated towns and cities, much like Native reservations in the United States, and the other half live in unrecognized villages. The Bedouin are Israeli citizens, but because their villages aren’t formally recognized by the state, they have no access to state services including water, electricity, telephones, sewage systems, and roads.

Today, the unrecognized villages of the Negev desert have the highest unemployment and poverty rates in Israel. I visited three villages to understand the effect of occupation. Be’er Sheva is the largest city in the Negev desert. It is home to 205,000 people, about 10 percent of whom are Palestinian citizens of Israel.

Originally founded in 4,000 BCE, Be’er Sheva has been at times a Bedouin encampment, part of the Ottoman Empire, and now, the fourth most populous metropolitan center in Israel. It is a thriving college town, a growing tech hub, and interestingly, the chess capital of the world.

Less than 5 miles away are unrecognized villages where people live in tents and tin shacks. The largest of the unrecognized villages is Wadi an-Na’am. It was established in the 1950s by internally displaced Bedouins from surrounding villages who’d been forcibly removed from their homes and lands, but it’s never been officially recognized.

In the 1970s, Israel built Neot Hovav, the country’s primary toxic waste disposal facility, in Wadi an-Na’am. Since its establishment, the facility has experienced frequent accidents, fires, explosions, and leaks, resulting in birth defects and long-term health problems in the Bedouin community.

The village is also surrounded by military firing zones, where the Israeli Defense Forces carry out military drills and trainings using live ammunition. Unexploded shells are often left behind from these exercises. The last accident killed two children aged 8 and 10. A power plant outside Wadi an-Na’am, a Bedouin village that gets no electricity from the state. (Photo: Aniqa Raihan)

An electric power plant is clearly visible from the village.

This plant generates electricity for Be’er Sheva and surrounding localities, but not for Wadi an-Na’am or the 45 other unrecognized villages like it. People in the villages depend instead on an inconsistent combination of solar panels and generators. Adalah, a human rights and legal organization, currently has three open cases regarding elementary schools in Wadi an-Na’am that lack electricity.

Israel recently announced its intention to relocate the residents of Wadi an-Na’am to the nearby town of Segev Shalom. The villagers oppose this plan because it would destroy their agrarian lifestyle. In 2015 the Association for Civil Rights in Israel presented two alternative options, both of which would allow the villagers to maintain their way of life, but the relocation will move forward as originally proposed. Umm al-Hiran, a Bedouin village on the verge of demolition by Israeli authorities. (Photo: Aniqa Raihan)

I also visited Umm al-Hiran, an unrecognized village on the verge of demolition. Like Wadi an-Na’am, Umm al-Hiran was established in the 1950s by order of the Israeli military governor as part of a state-sanctioned effort to relocate and concentrate the Bedouin. Half of the village was briefly granted recognition in 2008, but the decision was reversed two years later.

The state has marked Umm al-Hiran as the site of a future Jewish development to be called Hiran, a project that necessitates the demolition of the entire village. Residents filed appeals and fought back in court, but in 2015, the Supreme Court of Israel rejected a petition to prevent demolition of the village. Construction was briefly halted following protests led by Adalah, but is expected to continue soon. A memorial to a Bedouin man shot and killed by Israeli police as he fled home demolitions in Umm al-Hiran. (Photo: Aniqa Raihan)

At 3 a.m. on January 18 of this year, Israeli police arrived at Umm al-Hiran to conduct home demolitions. A local teacher named Yacoub Abu Al-Qia’an got in his car and began to drive away, but was shot at by the police.

One of the bullets hit his right knee, causing him to lose control of his vehicle and accelerate into a group of officers. One officer was killed, as was Yacoub. Israeli authorities initially declared him a terrorist connected to ISIS, but retracted when video evidence surfaced proving that he was shot before his car accelerated.

This memorial stands at the scene of the shooting. A tribal cemetary is most of what remains of al-Araqib, a Bedouin village that Israeli authorities have demolished over 100 times. (Photo: Aniqa Raihan)

And finally, I visited the most notorious of the unrecognized villages, al-Araqib. This village, which was once home to 600 people, has been demolished 119 times. Now, only 5 tents and a tribal cemetery remain. There are more graves than villagers.

Amazingly, the demolitions aren’t even the worst past: Perhaps the most unsettling aspect of this yearslong tragedy is the government’s demand that the residents of al-Araqib pay for the cost of demolishing their homes.

I have been part of the movement for Palestinian justice for a year and a half now. I have spent hundreds of hours reading about the blockade of Gaza, the murders of Mahmoud Shaalan and Rachel Corrie, the intifadas, the checkpoints, the BDS movement, and more, but I was still shocked by what I saw in the Negev desert. The Bedouin are continually displaced and disenfranchised by the state — and too often, they are also erased from the mainstream Palestinian narrative.

This is occupation, pure and simple, and it is 70 years past time the world recognizes it.

Aniqa Raihan is a former Next Leader at the Institute for Policy Studies and a past member of Students for Justice in Palestine at George Washington University. She’s currently traveling in Israel-Palestine.