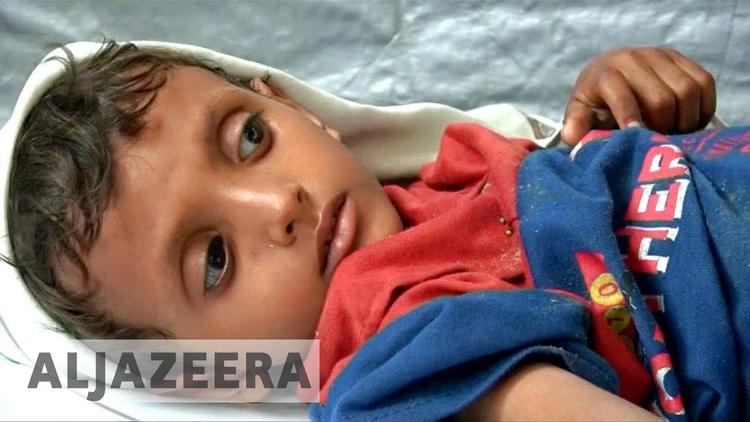 In a move to further suffocate Yemen, Saudi Arabia announced on Monday that it would close all land, air and sea borders to Yemen. Now the UN and others have warned that the blockade will harm restrict vital humanitarian aid to Yemen’s civilians.

A statement from Saudi news agency SPA reported it was to stem the flow of arms to Houthi rebels.

“The Coalition Forces Command decided to temporarily close all Yemeni air, sea and land ports,” the statement on SPA said, adding that aid workers and humanitarian supplies would continue to be able to access and exit Yemen.

The blockade came after Houthi forces claimed responsibility for rockets fired at the King Fahad International Airport in Riyadh on Saturday. Houthi forces said it was in retaliation to Saudi-led attacks that have killed Yemeni civilians.

Saudi Arabia have since blamed Iran for the attack, calling it an “act of war”. The Houthis however say their weapons are locally produced. Iran also denies arming the Houthis.

However, the UN on Tuesday urged Saudi Arabia to lift the blockade to allow the flow of humanitarian aid to reach Yemen.

“If these channels, these lifelines, are not kept open it is catastrophic for people who are already in what we have already called the world’s worst humanitarian crisis,” a spokesman for the United Nations humanitarian office OCHA, Jens Laerke, told reporters in Geneva.

NGOs and researchers raised fears that the blockade could worsen Yemen’s already dire humanitarian crisis, as vital supplies will be restricted.

“The air, land and sea blockade is a full frontal assault on the civilian population in Yemen. Failure to ensure that civilians and parties to the conflict have access to humanitarian aid or basic amenities amid the cholera outbreak sweeping large parts of the county will be a violation of the law of war,” said Khalil Dewan, a London-based researcher on Yemen.

When asked to comment on this decision, International Crisis Group’s Arabian Peninsula Project Director April Longley Alley said she believes it could enhance the suffering that Yemen’s civilians already face.

“Depending on how long this goes on, it could have devastating consequences for an already desperate humanitarian situation. Given shrinking supplies from Hodeida port, the Saudi border crossing and Aden have increasingly filled the gap for supplying Huthi controlled areas, which contain the majority of Yemen’s population. If all borders and ports are closed, the lifeline for these areas will be cut,” she told Informed Comment.

“But the decision will also directly impact areas that are nominally controlled by the Hadi government. The caveat that these closures will not impact humanitarian assistance is not enough to ensure food and other basic supplies reach the population.”

This is not the first time the coalition has been warned for blocking humanitarian aid into Yemen. Soon after its initial intervention in the Yemen conflict in March 2015, aid agencies sounded the alarm that the coalition was blocking supplies into Yemen, putting millions of lives at risk.

While the coalition at the time claimed to be targeting weapon flows to rebels, numerous vessels without weapons on them were blocked and targeted. Essential humanitarian aid could not reach Yemen.

Soumaya Beltifa, the Sana’a-based spokesperson for the International Committee of the Red Cross ICRC told Informed Comment that she is “hopeful that the situation imposed by Saudi will not remain for much longer otherwise we will face much worse humanitarian situation”.

In August the UN Development Programme (UNDP) criticised Saudi Arabia for blocking fuel deliveries to UN planes delivering a bulk of the humanitarian aid for Yemen, The Independent reported. They were therefore unable to complete their missions.

“We have difficulties obtaining permission from the coalition and from the government of Yemen to transport this jet fuel to Sanaa to facilitate these flights,” said Auke Lootsma, the UNDP’s Yemen country director.

Asked why jet fuel deliveries were blocked, Mr Lootsma said “It’s a good question. I don’t have an answer.”

The country suffers from the fast growing and largest ever recorded cholera crisis, which is predicted to reach a million cases by Christmas. NGOs widely blame it on a breakdown of Yemen’s healthcare system – caused by the bombing campaign.

Jonathan Fenton-Harvey is a UK-based freelance journalist, with a special focus on the Middle East and North Africa, where he has traveled extensively. His work has been featured in the New Arab (Al Araby Al Jadeed English), Middle East Eye, Counterpunch and Tribune magazine (UK). He also studies history and politics at the University of Exeter.