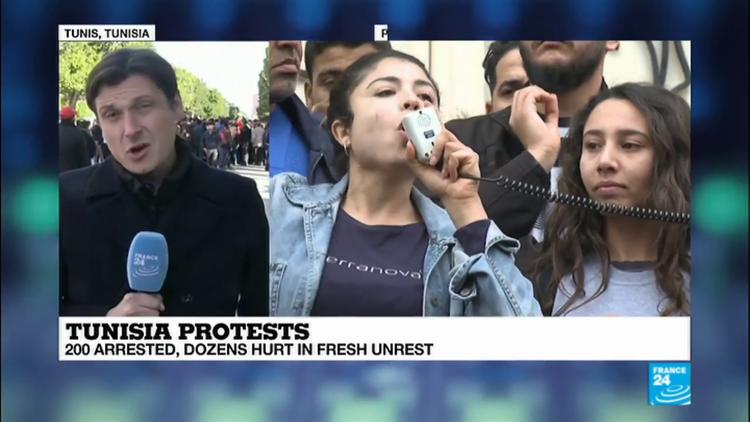 Protests have been taking place across the North African country over the past several nights in protest against government austerity measures at the behest of the IMF.

At least one person is dead and 200 people have been arrested during several nights of protests in Tunisia, according to The Guardian.

Protests have been taking place in the North African country in the cities of Nabeul, Kelibia, Jebeniana, Sfax, Gafsa, Tebourba and a dozen others since anti-austerity demonstrations started Sunday night. Reuters reported that around 50 police forces have been injured in the last two days.

The government has taken no responsibility for the death of a 55-year-old man, but a Facebook video shows a police car ran over protesters, Al Jazeera reported.

The Tunisia Press Agency, or TAP, says six government vehicles have been destroyed in clashes with protesters the government calls “trouble makers” with “criminal records.”

Demonstrators have come out to show their frustration at the government’s new annual budget that went into effect Jan 1. It includes slashing fuel subsidies, a 7.5 percent increase in company taxes, and creates a public sector hiring freeze other than for the military. The 2018 budget also raises a real estate tax in the midst of 15 percent unemployment.

The Popular Front party, Head of Government Youssef Chahed’s main political opponent, has organized the nationwide protests. They are rallying support under the social media hashtag, #Fech_Nestannew (What are we waiting for?), and calling for further protests on Jan. 12.

Twenty-seven-year-old factory worker Imen Mhamdi told Al Jazeera, “This government, like every government after (Zine El Abidine) Ben Ali, only gives promises and has done nothing.”

The new set of austerity measures inciting current protests are a result of the administration’s 2016 International Monetary Fund, IMF, loan of US$2.9 billion. The IMF claimed the government isn’t doing enough to meet loan conditions, such as cutting state spending, and suspended its second loan installment of US$320 million in April.

In response, Chahed chose to redo the 2018 budget. Under pressure from labor unions, the government agreed to increase state worker salaries this year and said it will “avoid” layoffs.

Tunisian Economic Reforms Minister Taoufik Rajhi said the administration plans “unprecedented reforms” to cut the deficit to 4.9 percent from six percent in 2018. It hopes to reduce the public sector workforce by 20,000 from 800,000 to meet this goal.

An IMF spokesman told Reuters that Tunisia needs urgent financial reforms, “including tax reforms and measures to limit the further growth of the public wage bill that risks becoming unaffordable and is among the highest in the world.”

The 2011 social uprising in Tunisia became the impetus for what became known as the Arab Spring. Jan. 14 marks its seven-year anniversary.

France24 English: “Tunisia: why are Tunisians taking it to the streets?”