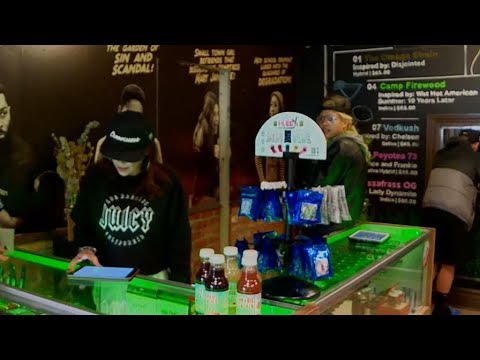 The city creates a “social equity” tier of applications who will receive priority for marijuana business permits.

Decades of marijuana prohibition in California are coming to an end thanks to ballot initiative Proposition 64, or the Adult Use of Marijuana Act. Approved by a majority of voters in November 2016, Prop 64 reduces criminal penalties for various marijuana-related offenses for adults and juveniles and allows marijuana entrepreneurs to participate in the recreational sale of cannabis to adults.

Yet Californians didn’t just legalize marijuana. In Los Angeles, the City Council went one step further, enacting some of the most progressive criminal justice reforms in the country to rectify the disproportionate effect the war on drugs has had on minority communities.

“We are L.A. We are leaders. We take on the tough issues,” City Council President Herb Wesson said Dec. 6 right before the bill passed, reported the Los Angeles Times.

Proposition 64 legalizes a marijuana industry that experts estimate will add $4 billion to $7 billion to the state economy that, if California were its own country, would be sixth largest in the world. And within that huge economy, L.A. has become the world’s largest market to approve the sale of recreational cannabis.

California was on the front lines of the war on drugs for decades. The state experienced nearly 500,000 marijuana arrests between 2006 and 2015, according to the Drug Policy Alliance.

The new ordinances in L.A. create a “social equity” tier of applicants who will receive priority for licenses to own and operate marijuana businesses. These are people who have past convictions for marijuana-related crimes, or who live in an L.A. neighborhood that was a verifiable target of enforcement during the drug war. It’s an attempt at restorative justice for the minority communities most negatively impacted by marijuana prohibition.

The law takes effect even as Attorney General Jeff Sessions reverses U.S. Justice Department guidance to leave enforcement of marijuana laws to the states. It’s unclear yet what effect new federal policies would have.

L.A. resident Donnie Anderson plans to remain vigilant during the city’s implementation of the rules. As chairman of California Minority State Alliance, Anderson advocated for the social equity program that they hope will play a major role in deciding which marijuana businesses will be allowed to open.

“The difference is justice is at the forefront,” Anderson says.

Anderson and Virgil Grant own MedEX, a medical cannabis dispensary in South L.A. Since 1996, when medical marijuana was legalized in California, 135 shops have been licensed to sell cannabis to patients.

According to the proposed rules, medical dispensaries will be first in line to receive a license to expand into recreational sales. However, Anderson and Grant and other groups like California NORML and the NAACP fought to ensure people with previous convictions wouldn’t be disqualified.

The social equity program offers minorities in L.A. a chance at justice, equity and fair development.

“[They] fought for cannabis to make sure we can build generational wealth from this plant,” says Walter Lance Edwards, who has a past drug-related conviction and plans to open a cannabis delivery service.

Anderson is helping Edwards obtain a fair shot at reaping the rewards of an industry that experts predict will bring in over $50 million in local tax revenue in 2018.

“We’ve been the ones going to prison for it,” Edwards said. “Now it’s time for us to own it and operate it in a business.”

As the nation’s attitudes toward marijuana shift—eight states have legalized recreational pot so far—Anderson believes the social equity program offers minorities in L.A. a chance at justice, equity, and fair development.

“It’s about those who’ve been harmed by the failed war on drugs,” Anderson says. “Our goal is about the socio-economics, and that’s what social equity really means.”

Because federal law still prohibits marijuana, federally insured banks won’t lend to marijuana businesses or handle cash from the proceeds of marijuana sales. This would place Edwards and other would-be entrepreneurs on unequal footing when competing with well-funded cannabis operations that have pockets deep enough not to need the assistance of commercial banks.

Another component of the new regulations would ensure that people with low incomes, residents of neighborhoods heavily affected by marijuana arrests, or those who have been convicted of marijuana-related crimes make up at least half of the workforce in the city’s new cannabis businesses. Both Edwards and Anderson grew up in South L.A. neighborhoods that were hotspots for drug arrests.

“I’m still rising out of the ashes from this, and the effects are still here,” Edwards says.

In ’82 and ’83 you saw Black “fathers in the household, mothers working,” Anderson says. The war on drugs, he says, “took the man, took the woman, and put the children in foster care. It created a warfare that I’ve never seen in my lifetime and I never want to see it again.”

Edwards says that over the years, as good industrial jobs abandoned the neighborhood, few options were left other than selling marijuana. “What do you got to do to feed your family?” he says. “It’s by all means necessary.”

Decades of independent studies confirm Edwards’ firsthand experience—while people of every race are equally likely to buy, use, and sell drugs, Black people are more than three times as likely to be charged, convicted, and harshly sentenced.

Instead of crackdowns, under the new equity program, the L.A. city council set up a neighborhood health fund that will direct a portion of city revenue from taxing marijuana businesses to pay for community beautification, addiction treatment, youth extracurricular education, and mental health services in areas affected by the war on drugs.

Taxes from legal cannabis will also go to community-based legal service providers that have already helped at least 4,500 people petition to have their convictions for low-level nonviolent crimes, such as drug possession and petty theft, changed from felonies to misdemeanors.

That reclassification of most drug- and theft-related crimes is a result of Proposition 47, which went into effect in 2014. As a result, the number of drug arrests in Los Angeles County has dropped by a third and, according to the Washington Post, it’s led to hundreds of thousands of people applying to get their previous drug convictions revised or erased.

“They’re coming, many of them with months or years of struggling to get a job or housing, and just that weight is really heavy, and you can sense that weight in the room,” Hernandez says.

What’s happening in L.A. and across California echoes a movement to atone for harsh penalties during the war on drugs. At least nine states, including Maryland, Oregon, and Vermont, have passed laws expunging or reducing marijuana convictions, according to the National Conference of State Legislatures, even while the sale, transportation, or possession of marijuana remains illegal under federal law.

Getting those stains removed from their records is something most people expected never to happen after their experiences during the years of marijuana prohibition.

“People leave [the expungement clinics] crying because they never thought they could get these offenses taken care of—especially for free,” Hernandez says.

“The point of this is to repair the damages caused by marijuana prohibition … for the people who’ve been most severely impacted,” she says. “We wanted to be that resource to repair those harms.”

Kevon Paynter wrote this article for YES! Magazine. Kevon is the Surdna reporting fellow for YES! Follow him on Twitter @KevonPaynter.

CGTN America: “Green rush is on as legal sales of recreational marijuana start in California”