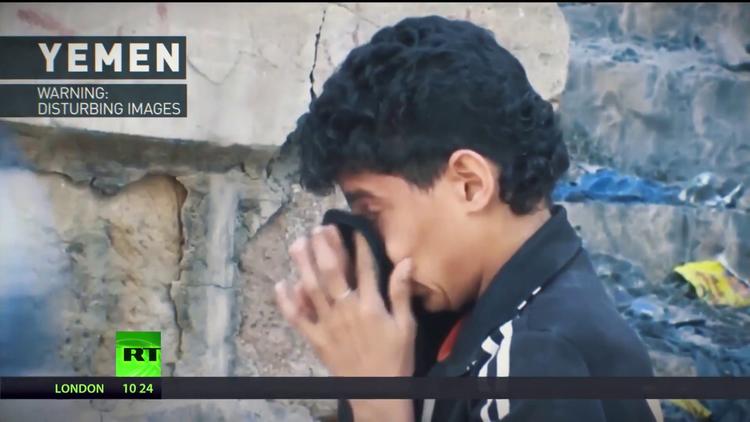 “Whose mouths must be stopped, who subvert whole houses, teaching things which they ought not, for filthy lucre’s sake.” (Titus 1:11)

Saudi Arabia and the United Arab Emirates have pledged to provide over $1 billion to address the humanitarian crisis in Yemen that they have created through a brutal bombing campaign, a ground war turning Yemenis against Yemenis and an illegal blockade of aid entering areas controlled by the Huthis. The best way to characterize this hypocritical largesse is in the colorful 17th century King James Version biblical prose: it is nothing but “filthy lucre.”

Top: Islamic coin from the era of the caliph ‘Abd al Malik with Arabic words only; bottom: Saudi riyal with the king’s face.

The British Prime Minister Theresa May, presiding over a Britain not as great as it once claimed to be, is pushing for a UN resolution to praise this cynical ploy to cover up crimes against humanity. No doubt this move by an unpopular politician about to welcome the Saudi Crown Prince Bin Salman has a political and an economic edge. Consider the statement by Foreign Secretary Boris Johnson, the praise dripping down his cheeks, about Britain’s historic relationship with the Saudis: “It’s an extraordinary partnership. It’s a partnership based on a common view of the world in many ways, not every way, but in many ways.” I suppose two of those “many ways” includes the British abandonment of Prince Faisal in World War I and their financially motivated love of oil. Or is it Saudi public execution by beheading,

Johnson’s ignorance, whether conscious or not, is quite profound. “Reform in Saudi Arabia, the custodian of the holy places, will be a change in the whole Islamic world,” he asserts. In terms of the “whole Islamic World,” Saudi Arabia is an outlier with its austere intolerant Wahhabi doctrine. If the major elements of reform are allowing women to drive and attend a football match, it is hard to see what this has to do with Islam anywhere else in the world. The Saudis have turned Mecca into a Disney pilgrimage with perks for the rich that would make the Prophet Muḥammad turn over in his grave (assuming the Wahhabi state is not going to pave that over for the world’s tallest shopping mall). Saudi Arabia is a family business before it is an Islamic state.

The idea that a billion dollars is an apology for the destruction of far more than 10,000 Yemeni lives, the threat of famine and a total breakdown of the economy is the worst kind of pandering, filthy in the biblical sense. Perhaps Johnson and May think that selling Saudi Arabia a billion British pounds of military equipment in just the first six months of 2017 is equalized by the Saudi coalition pledge. If May and Johnson bother to watch documentaries on the BBC, they may have learned that Bin Salman is building his reform on a sand dune. It seems that ordinary British citizens are as wary of a visit by the Saudi royal as they are with Trump.

The biblical reference in the epistle of Titus is to those who were spreading false teaching for the sake of money. In his well-known biblical commentary, the late 17th century scholar Matthew Henry explains the problem: “They had a base end in what they did; serving a worldly interest under pretence of religion: for the love of money is the root of all evil.” The Saudi royals, with their billions upon billions of dollars invested around the world, their palaces in Europe and North Africa, their yachts and just about any exotic item that money can buy, may pray five times a day, but their real worship is filthy lucre. The royal face graces the Saudi riyal, while throughout Islamic history Arabic script alone was the norm. Henry continues: “Shameful actions, the reproach of heathens, should be far from Christians; falsehood and lying, envious craft and cruelty, brutal and sensual practices, and idleness and sloth, are sins condemned even by the light of nature.” Such a sentiment works equally well for Muslims not of the Wahhabi persuasion.

If the love of money is indeed the root of all evil, then the praise of blood-soaked humanitarian aid money must be evil as well. To kill someone and then offer to pay for an expensive coffin for the mangled corpse does not cover the evil of the deed. Yemen does not need Saudi filthy lucre; the Yemeni people should be left alone to sort out their own grievances as a sovereign people.

Reprinted from MENA Tidningen with the author’s permission.