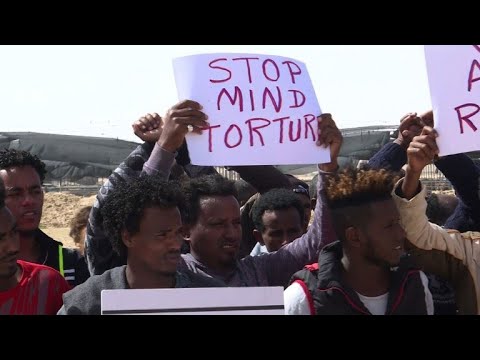 Around 20,000 Israelis and African migrants took to the streets in Tel Aviv on February 24, protesting against a government policy of detaining and deporting African asylum seekers who refuse to leave the country. A few days earlier, a group of Eritrean asylum seekers held at a detention centre in Israel went on hunger strike in protest against their imminent expulsion from the country.

In early Feburary, Israel began issuing expulsion orders to African migrants and asylum seekers whose asylum claims had been refused by the government. Most were from Eritrea and Sudan. The orders, under new rules announced in December 2017, give people the choice to be sent to a “third country” by the end of March, or face detention and imprisonment. The receiving countries will reportedly receive US$5,000 per asylum seeker they accept, while the asylum seekers themselves receive a plane ticket plus US$3,500 each.

The “third countries” have not been officially named, but they were reported to be Rwanda and Uganda – although both countries subsequently denied signing a deal with Israel.

It is the Israeli regime of deportation and detention that is the root cause for the distress of the African migrants and asylum seekers on its soil. It is almost impossible to even launch an asylum claim let alone become a recognised refugee. Merely 11 African asylum seekers, ten from Eritrea and one from Sudan, were given refugee status between 2009 and 2017.

However, in what might prove to be a landmark ruling, an Israeli special appeals court ruled on February 15 in the case of an Eritrean asylum seeker that desertion from the Eritrean military provided a valid claim for asylum. This ruling could affect many Eritreans threatened with deportation, but is unlikely to change wider attitudes among Israeli authorities, who in any case will appeal.

Mixed reasons for coming to Israel

In early February there were multiple protests in front of Rwandan embassies in many countries, including the UK, Germany and Israel under the slogan Tell Rwanda No Refugees4Sale. At a similar protest in front of the Rwandan embassy in Tel Aviv a few days earlier, Eritrean protesters staged a mock “slaves for sale” in Israel auction.

It is not Rwanda that is “selling” people, but Israel.

There are those Eritreans who have flown persecution as stipulated in the Refugee Convention and therefore should have their asylum claims assessed according to international refugee law. But it’s also wrong to assume that all of the people now threatened with deportation from Israel are innocent victims.

Eritreans and Sudanese people have arrived in Israel via different routes – some forced, and some voluntarily. There have been historic reports of Eritreans abducted in Sudan by Bedouin tribes, sold on and somehow ending up in Israel against their will. It might be that some of those who protested in Tel Aviv and elsewhere experienced that fate.

But in my own research among Eritrean asylum seekers in Israel between 2010 and 2013, all the people I encountered in Tel Aviv came there by choice – often a choice between a number of not very enticing possibilities, but a choice nevertheless. And even at a time when the Israeli border with Sinai was still open, up to 2013, Eritrean networks in Israel warned their compatriots not to come, but many still did. They were aware of the dangers of kidnapping in Sinai, and aware of the fact that the wider Israeli public and many leading politicians were rather hostile to their arrival – and that they may not have their claims for asylum accepted. But they still took the risk because they wanted a better life – not because they could not live in Eritrea.

It’s still wrong, however, for Israel to “sell” them to Rwanda or Uganda in this way. Instead, those whose asylum applications have been rejected need to have a say in their future, ideally within a broader resettlement or repatriation scheme.

Aspirations for a new life

This understanding of Eritreans as mixed migrants, who leave Eritrea for a number of reasons and more often than not with a clear plan and clear aspirations, was confirmed by research carried out by Netsereab Ghebremichael Andom for a PhD at the University of Khartoum, based on long stints of fieldwork among Eritrean refugees in Sudan.

I was in Tel Aviv when plans to send Eritreans and Sudanese “voluntarily” to Rwanda were first drawn up in 2012. Most of my Eritrean interviewees then said they would rather go back to Eritrea, if that was the choice, than go to Rwanda. One put it:

I left my country to find a better life abroad, if I am sent back to Africa I will go to Eritrea – whatever happens to me there.

A number of Eritrean and Sudanese refugees and asylum seekers did eventually “agree” to “voluntary departure”, around 18,000 people in total between 2013 and 2016, many of whom were flown to Rwanda. Researchers who have followed these previous groups have revealed their subsequent plight – an often circular and rather desperate movement from one country to the next. While the lucky ones eventually made it to Europe, others were stuck in limbo.

For Eritrean and Sudanese refugees in Israel, what one of my research participants said to me in 2011 remains true: “My trip is not over, because they don’t accept me here in Israel and I don’t get the rights I am supposed to get.”