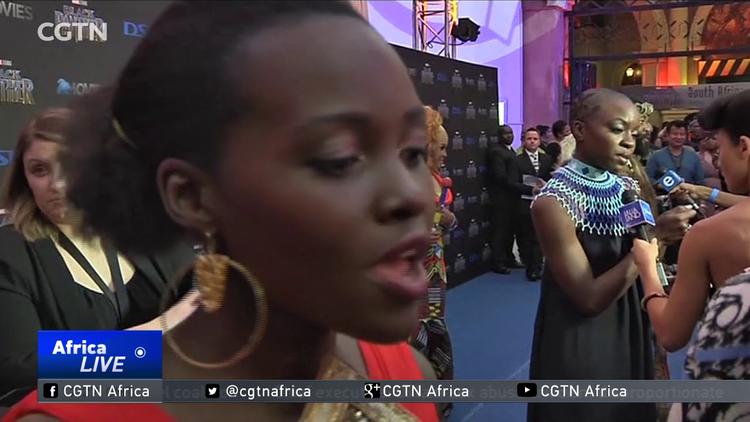 Before the film was released, the nation of Wakanda was taking shape in our minds.

“When I wondered if imagination could be necessary for the revolution and transformation, you said yes, you said our dreams and visions matter, they are the way we make oppression temporary.” —adrienne maree brown

I have a theory.

A mystical energy was released a few years ago, and it’s been swirling around the globe slowly gaining momentum. This energy has turned into a fierce flame activating imaginations, and changing destinies. Ancient memory within DNA is being unlocked, and lost minds are being reprogrammed.

Black Panther the film has sparked the flame, even before trailers were released, and there is no extinguishing it.

Black people of the African diaspora have yearned for this moment, whether we realize it or not. We are hungry for contemporary images of powerful Black superheroes kicking ass to protect their African nation. As Fela Kuti sang, “Don’t bring that bullshit to Africa.” But as we all know, it takes more than a song to keep the BS away.

It takes diligent and innovative fighting for justice and goodwill toward humanity. And where we fail, our superheroes strive. They show us the way because they foresee an impending future dystopia, and quickly answer the call to prevent it.

For these reasons we love Black Panther, and his nation Wakanda. He plans and executes without fear, successfully, over and over again. Wakandan soldiers are highly skilled and ferocious, as are the Dora Milaje, BP’s all-female personal guards. Because they are winning, we are winning.

Black Panther’s well-honed skills, intelligence, courage, and compassion are what we search for in a leader. And Wakanda is the Black utopia we’ve collectively imagined, discussed, and designed ever since the trans-Atlantic slave trade.

Enslaved Africans and their descendants have long envisioned other realities where they could freely live, love, create, prosper, and manifest their dreams safely. That future vision propels them—individually and collectively into a place of uncertainty and risk, but the dream is too great, too seductive, and too real not to chase.

Imagining and creating Black utopias is one of many ways Black Americans have survived and coped with the intergenerational traumas embedded in our DNA. There is something so reassuring about an unstoppable force that protects us from the oppressive claws of White supremacy. Black Panther reinvigorates a centuries-old rejection of a system that has enslaved Black bodies. And Wakanda is a great model for how a liberated Black state could operate.

In the story of Black Panther, he is king of Wakanda, which is abstractly located in East Africa. Underestimated as a weak third world country, it operates within its own economic ecosystem based on Wakanda’s social order, ethos, and culture.

Wakanda is the future location of innovation and hope, yet it exists now, in our present reality.

They have no need to participate in a global economy.

This has angered and dumbfounded the United States, which has orchestrated an invasion to forcibly remove their most valuable resource, Vibranium, a fictional metal of alien origins that absorbs kinetic energy, gives mystical powers, and is used to enhance technology, such as Black Panther’s superhero suit.

Wakanda is the only place on Earth where one can find Vibranium.

I imagine Vibranium being administered across the globe to heal traumas stored in all bodies. Step one to creating a Black utopia.

How can we manifest a Wakanda-like world now?

I’ve experienced pockets of Wakanda in Detroit, Brooklyn, Chicago, Houston, Paris, London, and Johannesburg. Places where creative innovation and new economies developed by Africans and their descendants further their community and thus humanity.

But to truly exist like Wakanda, with a human-centered ecosystem, what future technologies are at our disposal to further this mission? What do we need to create to ensure no human is exploited for capital gains?

In Detroit, there is a strong push toward blockchain technology as a right. Blockchain technology is the technology behind the decentralized financial system of cryptocurrency. It is the most secure digital ledger that is completely transparent and immutable. It is a peer-to-peer system that has many uses beyond cryptocurrency, such as voting, access to medical records, ability to make smart contracts, and much more we haven’t even discovered yet.

There is an opportunity essentially to construct a financial and governmental structure that exists outside of a system that continuously penalizes and criminalizes Black and brown bodies. With blockchain technology, the imagined liberation we’ve been fighting for could become a reality.

Wakanda is the future location of innovation and hope, yet it exists now, in our present reality. Nothing needs to change in order to access Wakanda except our consciousness. And we are witnessing that shift now.

The Black Lives Matter movement has prepared us to fully receive all the lessons of Black Panther.

Black Panther has mapped and built our dream world. A world where liberated Black bodies are in power, and control while being technological geniuses and warriors for justice. Black Panther has conjured a contemporary lens through which to imagine Blackness and the Black utopia of our present, and our future. I would assert here that just maybe it is Wakanda we’ve anticipated seeing just as much as our superhero.

Because in Wakanda, we all belong. We’ve already claimed it as our own, our hometown, the place where we plan to escape to if 45 keeps acting up, the location of our heart, where we feel safe, where we are able to create freely.

Before the film was released, even before the trailers, the nation of Wakanda was taking shape in our minds. This is how the revolution begins, a slow expansion of the future vision that emerges. .

Since the heartbreaking death of Trayvon Martin, six years ago this month, the nation has been rallying together to protest the violence against Black bodies. We are now witnessing an unprecedented global rallying around a Black superhero, an African superhero who is king of an independent, debt-free African nation.

Every time the film Black Panther is celebrated, White supremacy withers. With the same force as a Black Panther kick, we reject the oppressive institutions and policies that continue to suffocate our communities. We reject the future that has been designed for us. Our inner superhero has been ignited. Our love for our Black bodies and the brilliant souls that inhabit them has deepened. A movement has begun. The insatiable appetite for a Black utopia has grown.

The Black Lives Matter movement has prepared us to fully receive all the lessons of Black Panther, and, most importantly, has taught us how to activate the flame that this film has sparked.

We are in control.

Ingrid LaFleur wrote this article for YES! Magazine. Ingrid is a futurist, artist, pleasure activist, cannabis advocate, and founder of AFROTOPIA. LaFleur lives in Detroit and works around the world.

Reprinted with permission from Yes! Magazine