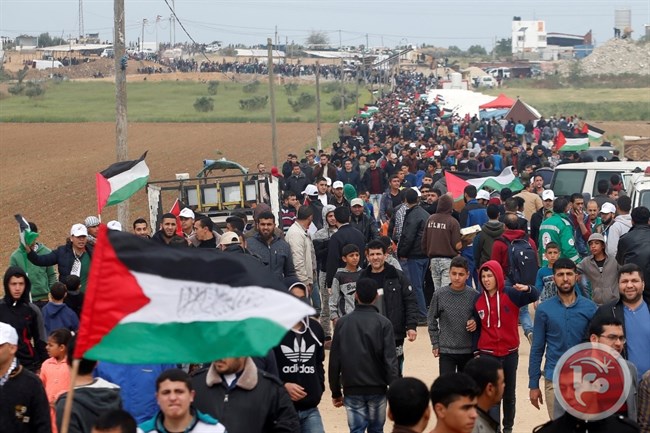 Palestinians in Gaza staged an unarmed protest Friday, part of a planned multi-week event, near the Israeli line of control. They are demanding the right to return to their homes.

The Israeli army indiscriminately opened fire on the protesters with live ammunition, killing at least 17 and wounding dozens (perhaps hundreds). Hundreds were also sickened by military-grade tear gas. This was shooting fish in a barrel. There is no reason to think that the Israeli troops were in danger or received deadly fire themselves. There was rock throwing toward the fence that imprisons the Palestinians. No Israeli casualties have been reported. Some video circulating, which IC cannot confirm, appears to show victims shot in the back or while praying. This was more like a US police shooting of an innocent, unarmed victim.

Although the US press is reporting that those killed died in “clashes,” they appear all to have been on the Gaza side of the line of control and never actually to have encountered any Israelis. There was no “clash.” Shooting down innocent unarmed people on their own land is typically termed “murder.”

In 1948, lean, mean Jewish immigrants into British Mandate Palestine attacked Palestinian villagers and townspeople in the south, in places like Beersheba and Nejd, and drove them into the Gaza Strip, where they live to this day, many of them still in refugee camps. On Nejd lands the Europeans formed the Israeli town of Sderot, which they have peopled not only with Israelis but also Thai agricultural guest workers.

Families in Gaza displaced from Nejd could walk home in half an hour if allowed to.

70 percent of Palestinian resident families in Gaza were kicked out of their homes in what is now Israel by armed Jewish immigrants into British Mandate Palestine, and the Palestinians were consigned to 8 refugee camps. They would starve to death if it were not for aid via the United Nations Relief and Works Agency, the budget of which Trump has just kneecapped. There are now 1.8 million people in Gaza, most of them desperately poor. Since 2007 they have been under a military and economic blockade by Israel, which routinely shoots their fishermen and has limited import of building materials such as cement. Israel carefully dispenses the right to leave Gaza, essentially a large jail for the victims of Israeli ethnic cleansing, and several Palestinian children have died in recent times because they weren’t permitted to go get good medical care.

In the course of World War I, the British army conquered geographical Palestine away from the Ottoman Empire. The other Mandatory forces authorized by the Versailles Peace Treaty, were charged with temporarily administering Syria, Iraq, Togo and other countries-in-waiting for the welfare of their inhabitants and in preparation for independence. Britain had some of these obligations in Palestine, for the then 1.3 million Palestinians, as well. But many British administrators thought of their charge as two-fold, since they also wished to establish what they called a “home” for the “Jewish people” in the midst of the teeming masses of Palestinians. They were paying off what they saw as a debt to Zionist leaders for their support in WW I. Their other debt was to the Hashemites of Mecca, to whom they awarded Transjordan.

Zionism grew up in the second half of the 19th century as a form of Jewish nationalism, modeled on the Romantic nationalism of the Germans and Italians. Most Jews of the time rejected the notion of making their religion the basis for a virulent form of modern racism or of giving Christian nationalists a cudgel with which to beat their Jewish co-citizens by declaring, as Zionists implied, that French Jews were Jewish and not French at all.

Moving people around to the inconvenience of their neighbors was a feature of authoritarian government in early twentieth century High Modernism. The British also dreamed of bringing millions of Punjabis from India into Iraq when they conquered it in 1918. Stalin moved Crimean Tatars to Central Asia. So too was the technique of partition. The French conquered Syria in 1920 and abruptly carved out of it a majority-Christian Lebanon, to make the whole region easier to rule, since they expected the Christians to support colonialism. Britain saw the European Jews it was importing as playing a similar role.

The Ottomans and their Muslim predecessors had ruled this region for nearly 1300 years with the exception of a hiatus during the Crusades. In the millennium after Christ, most Palestinian Jews had converted to Christianity and then some converted to Islam. A small number of men emigrated to Europe as merchants around 800 and they grew into the Ashkenazi Jewish community, taking non-Jewish convert wives and occasionally converting friends and neighbors. Between 1000 CE and about 1800 CE, there were almost no Jews in Palestine; Bonaparte’s expedition estimated 3,000 around 1799. In the 1800s some Russian charities were set up so that Jewish retirees could go to Jerusalem and spend their last days studying Torah in the holy city, and Russian Jewish residents grew in number to a few thousand.

Tens of thousands of Jews relocated to the British Mandate of Palestine in the 1920s, but they were small numbers of mainly Eastern European pioneers. They carefully set up a system whereby they received monetary support from Jewish communities in the West to buy up land, and then they alienated that land in perpetuity, forbidding its resale to non-Jews. Their goal was to buy up enough of Palestine on which to form a Jewish state, and to expel any Palestinians who would not cooperate.

By 1936 the Palestinians had figured out that the British Mandate, far from being benevolent, was predatory and malevolent, aiming at dominating them for hundreds of years and in the meantime of displacing them with Ashkenazi clients, whom the Palestinians viewed as illegal immigrants. The Palestinians launched a revolt, 1936-1939, which convinced the British to issue a White Paper promising to restrict further Jewish immigration and to schedule Palestine to become an independent country by 1949. Zionist thinkers and leaders, livid, pledged that the White Paper would not stand.

With the rise of Fascism and institutional, murderous Antisemitism in Europe in the 1930s, the number of Jewish immigrants into Palestine rose significantly in the 1930s. By 1940 there were 400,000, and the Palestinians were over a million.

When the British announced in 1947 that they planned to decamp, civil war broke out in Palestine. The Palestinians lost and 720,000 of them were expelled from their homes (these families have grown into several million). In 1967, the Israelis came after the refugees in the West Bank and Gaza and established rule over them.

Today, there is a Palestinian majority in the lands controlled by Israel. But only the Jews and a small minority of Palestinians living inside Israel can vote or have power, and their military rule controls the West Bank and encircles Gaza, which they have left without an airport or harbour or any visible means of support.

Zionist propaganda has assiduously covered up this tawdry reality, so that, amazingly enough, as with the realities of climate change, the American public is oblivious to what is being done to the Palestinians and blames them for any reaction they undertake to these massive and ongoing injustices.

White Americans are the richest people in the world and the most powerful, but have developed a sense of grievance that led them to put the Neofascist Trump regime in power in Washington. Imagine what they would do if they had been treated the way the Palestinians have been. That is why blaming everything on “Hamas” is silly. Hamas is a symptom, not the disease.