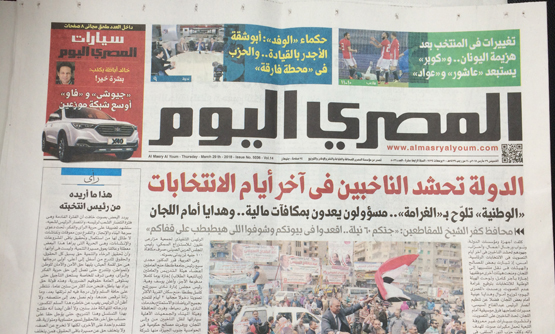 Breaking News added by Informed Comment: Egyptian Security Police have raided the website of the offices of Masr al-Arabia and arrested its editor, apparently over the newspaper’s reporting of Sisi vote-buying. – JC

Not content with securing 97% of the votes in Egypt’s presidential “election”, the Sisi regime is venting its wrath against local and foreign news media that ventured to criticise the process.

On Sunday it was reported that the Egyptian newspaper al-Masry al-Youm had been fined LE 150,000 (about $8,500) over a front-page headline which said: “The state mobilises voters on the final day of the elections”.

Al-Masry al-Youm: the front page headline that upset the authorities

The headline itself might sound innocuous but it was deemed an insult to “the state’s institutions” and to “the Egyptian people”.

The implication of the story was that Egyptians were less than enthusiastic about voting when the result was a foregone conclusion and that the authorities therefore had to provide inducements to get them to the polling stations.

Before the fine was announced, the managing director of al-Masry al-Youm had already apologised for what he said was “inaccurate” wording of the headline and one of its journalists had been dismissed. 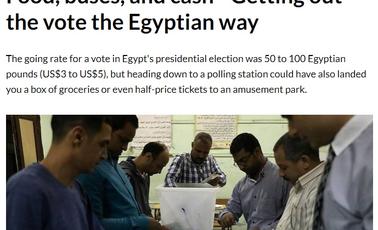 Disciplining the local media is par for the course in Sisi’s Egypt but this time, more unusually, the authorities have also directed their fire at two international media heavyweights: Reuters news agency and the New York Times.

“The going rate for a vote in Egypt’s presidential election was 50 to 100 Egyptian pounds (US$3 to US$5), but heading down to a polling station could have also landed you a box of groceries or even half-price tickets to an amusement park.

“Reuters correspondents have witnessed multiple cases of state institutions, lawmakers, private businesses, and pro-Sisi individuals seeking to reward voters or make it seem turnout is higher than it actually was.”

The New York Times report – target of an official complaint

The New York Times had a similar story from its own reporters headed: “For as little as $3 a vote, Egyptians trudge to election stations”. It continued:

The woman in a long black shawl bustled up to a stall on a back street in the crowded Nile Delta city of Tanta, 50 miles north of Cairo.

“Where’s my subsidy box?” she demanded. “My brothers and sisters in Cairo have already received theirs. When do I get mine?”

The woman, Soad Abdel Hamid, a housewife, was referring to boxes of subsidised food — cooking oil, rice and sugar, mostly — promised to voters in many poor areas in return for casting their vote in Egypt’s presidential election.

The Egyptian authorities have since succeeded in getting Reuters to withdraw its report. A statement from the news agency said this was “because it did not meet Reuters standards”. It gave no further explanation.

Egypt’s State Information Service said it had contacted Reuters over the “flawed” report and the decision to withdraw it had been made by made by Reuters management in London and New York.

According to the State Information Service, the National Elections Authority has also filed a complaint against the New York Times for publishing “false news and statements that aim at insulting the presidential elections and the [electoral] authority”. It said the paper had “claimed the electoral process witnessed violations without providing any evidence about such violations”.

The official result of the election, declared on Monday, gave Sisi 21,835,378 votes (97.08% of the total). Spoiled ballot papers accounted for 7.27% – far ahead of the only other candidate, Moussa Mostafa Moussa, a Sisi supporter who got 2.92%. Sisi’s share of the vote was a fraction of one per cent higher than in the 2014 poll.

In the absence of any doubt about Sisi’s re-election, the authorities’ main concern appears to have been avoiding a low turnout. The official turnout figure – 41.5% – was roughly the same as in 2014 but has been greeted with incredulity in some quarters. During the voting process several election-watchers had suggested a much lower figure – around 20%.

Following the official announcement of the results the US State Department issued this statement:

“We look forward to continuing to work with President Abdelfattah al-Sisi to advance our strategic partnership and address our common challenges, while encouraging respect for and protection of basic rights and freedoms. The United States values its strong partnership with Egypt and will continue to work to advance our shared objectives.

“We have noted reports of constraints on freedoms of expression and association in the run-up to the elections. We will continue to encourage a broadening of opportunities for political participation for Egyptians, and emphasise the importance of the protection of human rights and the vital role of civil society in Egypt.”