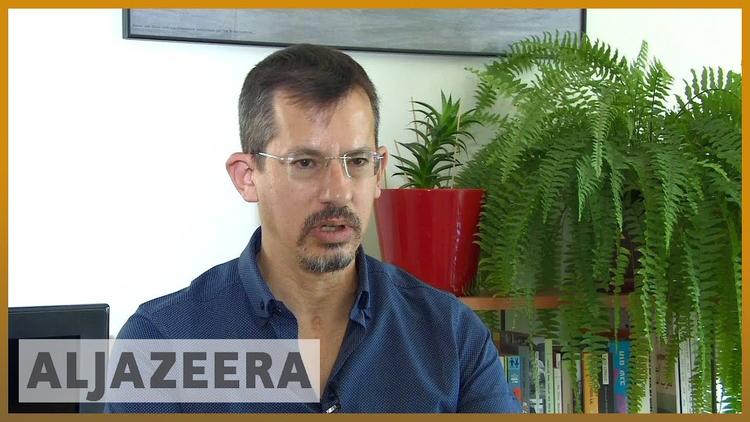 BETHLEHEM (Ma’an) — Israeli human rights organization B’Tselem launched a campaign entitled “Sorry Commander, I cannot shoot,” on Thursday urging Israeli soldiers to refuse orders to shoot unarmed Palestinian protesters in Gaza.The organization is taking the unusual step of calling directly on Israeli soldiers to refuse orders in the wake of last Friday’s deadly protests in Gaza, when Israeli forces heavily used live fire on civilian demonstrators, killing 16 Palestinians in a single day and injuring hundreds of others. Friday’s demonstration, in which an estimated 17,000 Palestinians participated, was the first day in a weeks-long protest called “The Great March of Return,” which will continue until May 15, the 70th anniversary of the Nakba, or catastrophe, when more than 700,000 Palestinians were expelled from their lands to make way for the creation of the state of Israel.As of Thursday, the death toll had reached 18 Palestinians, after 25-year-old Ahmed Arafa was shot in the chest in the “buffer zone” area of the border, east of the Bureij refugee camp in the central Gaza Strip.According to B’Tselem, the campaign will include advertisements in Israeli newspapers “clarifying to soldiers that they must refuse to open fire on unarmed demonstrators,” which the group argues are “manifestly illegal orders.”B’Tselem criticized the Israeli military for announcing in advance that soldiers will use live fire against protesters, even if they are hundreds of meters away from the border fence, rather than taking steps to reduce the number of casualties. “The responsibility for issuing these unlawful orders and for their lethal consequences rests with the policy makers and – above all – with Israel’s prime minister, defense minister, and the chief of staff,” B’Tselem said, adding that said Israeli officials bear the responsibility of changing the regulations ahead of this Friday’s planned protests. “That said, it is also a criminal offense to obey patently illegal orders. Therefore, as long as soldiers in the field continue to receive orders to use live fire against unarmed civilians, they are duty-bound to refuse to comply,” the group said in a statement.B’Tselem emphasized its position in the statement, saying “it is a case of unmistakable illegality patently evident in the order itself, it is a command that bears a clearly criminal nature or that the actions it orders are of a clearly criminal nature. It is an illegality that pains the eye and outrages the heart, if the eye be not blind and the heart be not callous or corrupt.” “The military is not permitted to act as it sees fit, nor can Israel determine on its own what is permissible and what is not when dealing with demonstrators,” the group said, adding “like all other countries, Israel’s actions are subject to the provisions of international law and the restrictions they impose on the use of weapons, and specifically the use of live fire.”B’Tselem called the use of live ammunition “blatantly unlawful in the case of soldiers firing from a great distance at demonstrators located on the other side of the fence that separates Israel from the Gaza Strip.”“In addition, it is impermissible to order soldiers to fire live ammunition at individuals for approaching the fence, damaging it, or attempting to cross it. Obviously, the military is allowed to prevent such actions, and even to detain individuals attempting to carry them out, but firing live ammunition solely on these grounds is absolutely prohibited.”B’Tselem is the latest among several rights groups who have criticized Israel’s excessive use of force against Palestinian demonstrators. Adalah, the Legal Center for Arab Minority Rights, released a statement on Friday condemning Israel’s use of military snipers against the civilian protesters.“The Israeli military’s use of 100 snipers against unarmed Palestinian civilian protesters in the Gaza Strip is illegal, the statement said, adding “live gunfire on unarmed civilians constitutes a brutal violation of the international legal obligation to distinguish between civilians and combatants,” the group said.