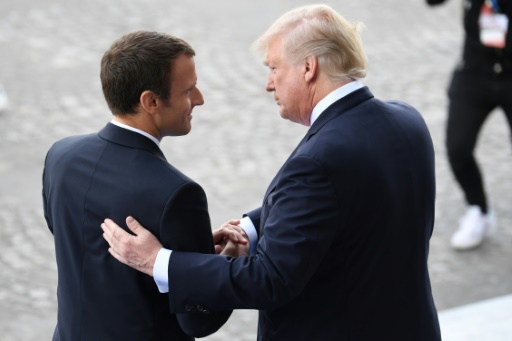 Washington (AFP) – French President Emmanuel Macron, who is heading to Washington to urge his US counterpart to stay in the Iran nuclear deal, said in an interview broadcast Sunday that there is no “Plan B” if the accord is scrapped.

French President Emmanuel Macron says he supports efforts to curb Iran’s ballistic missile program, but that this does not require scrapping the nuclear accord with Tehran

“I don’t have any Plan B for nuclear — against Iran,” Macron told Fox News Sunday, in an English-language interview broadcast on the eve of his three-day state visit.

“So that’s a question we will discuss, but that’s why I just want to say, on nuclear — let’s present this framework because it’s better than the sort of North Korean type of situation,”

US President Donald Trump is threatening to tear up the 2015 agreement aimed at curbing Tehran’s nuclear efforts unless European capitals agree to supplement it with tougher controls on Iran’s missile program and future ability to return to nuclear fuel enrichment.

Iran is upping the rhetoric in return — with Foreign Minister Mohammad Javad Zarif warning Saturday Tehran is ready to “vigorously” resume enrichment if the United States ditches the nuclear accord.

Macron said he too supports efforts to curb Iran’s ballistic missile program, but that this does not require scrapping the Joint Comprehensive Plan of Action (JCPOA) nuclear accord.

“I’m not satisfied with the situation with Iran. I want to fight against ballistic missiles, I want to contain their influence in the region,” he said.

“My point is to say don’t leave now the JCPOA as long as you have not a better option for nuclear, and let’s complete it with ballistic missile and regional containment.”

Macron also cited the shared goal of reining in Iran’s influence as he argued for a long-term US commitment in Syria — where Paris and Washington have cooperated in the fight against the Islamic State group and coordinated strikes on Syrian regime chemical weapons installations.

“We will have to build a new Syria after war,” Macron said. “And that’s why I think the US role is very important to play.”

“Why? I will be very blunt. The day we will have finished this war against ISIS, if we leave, definitely and totally, even from a political point of view, we will leave the floor to the Iranian regime, Bashar al-Assad and these guys.”

“And they will prepare the new war. They will fuel the new terrorists.”