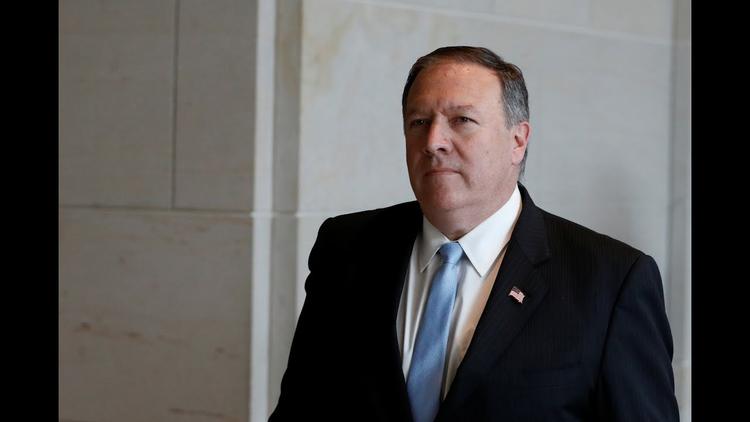 The Senate Foreign Relations committee narrowly voted in favor of former CIA director Mike Pompeo for Secretary of State on Monday, after President Trump called up Sen. Rand Paul (R-KY) and convinced him to change his negative view to a positive one. Those pundits who expressed confidence that GOP Libertarians and traditionalists would foil Trump’s unadorned white nationalism have been disappointed again.

On Saturday, I detailed the reasons for which I think Pompeo is an outrageously poor choice for Secretary of State.

But I just noticed something in one of his statements while he was a representative in Congress from Kansas, and it is potentially chilling.

In 2016, I commented on the arrest of three white terrorists in Mr. Pompeo’s Kansas who had plotted to blow up hundreds of Somali-Americans in an apartment block. White nationalist terrorism has spiked since Trump and his wing of the Republican Party, including Mr. Pompeo, began pimping for it.

The three members of “the Crusaders” offshoot of the “Kansas Security Force” hate group were convicted on Monday of having plotted to kill as many people as they could.

I wondered if Mr. Pompeo, who has been guilty himself of bigotted speech against Muslim-Americans and is a pal of hate purveyor Frank Gaffney, had ever said anything about the plot.

When he was a representative, Pompeo “praised law enforcement” for breaking up the Crusader plot, according to kansas.com.

Here is what he said,

I want to extend my sincere gratitude and thanks to all law enforcement officers involved in thwarting this attack in Kansas . . . Everyone in our state, and in the country, owes much to the men and women of the FBI and police who protect us. … We must remain vigilant against attacks directed toward any American and condemn this type of violence.”

But, I thought, the attacks were directed toward immigrants, some American citizens and others green card holders or on other sorts of work visa.

Pompeo only condemned attacks on Americans, not bringing up attacks on immigrants or resident non-citizens.

Was this a dog-whistle sop to his white nationalist base in Kansas? Was he privately saying the opposite of what the statement appeared to imply?

Moreover, even if the statement was not as sinister as that, note the smarmy paternalism of the phrase “any American.” Is he holding his nose and saying even those people have to be protected? Why not just say “attacks directed toward the people of America” or “Kansas residents” or some inclusive language that would make clear that you can’t blow up little girls because their parents were born in Mogadishu?

Not to mention that he is now plumping to join an administration that does not feel at all grateful to the FBI and has been unrelentingly smearing the agency.

After the Boston Marathon attack, Pompeo took to the floor of Congress and said,

When the most devastating terrorist attacks on America in the last 20 years come overwhelmingly from people of a single faith and are performed in the name of that faith, a special obligation falls on those that are the leaders of the faith. Instead of responding, silence has made these Islamic leaders across America potentially complicit in these acts.”

But the majority of people harmed by terrorism in the US since 2002 have been victims of white nationalism, and we haven’t seen Pompeo vigorously attack that phenomenon. Is he complicit by his silence? Moreover, of course, it is a lie that mainstream Muslim leaders have been silent; they have gone blue in the face condemning terrorism (which they in fact don’t have a responsibility to do since they have nothing to do with it. Does Pompeo as an Italian-American have a responsibility periodically to condemn Mussolini?)

The question could be turned around on Pompeo. By hinting broadly that all Muslim Americans are implicated in any act of violence committed by some unbalanced person of Muslim heritage, wasn’t Pompeo creating the very sort of atmosphere that encouraged the formation of the Crusaders terrorist cell?

Someone who was a regular guest on Frank Gaffney’s show should not be secretary of state. Someone should ask him before the full senate votes how he really feels about the anti-Muslim terrorism in his own state and whether he feels any responsibility for his politics of guilt by association?