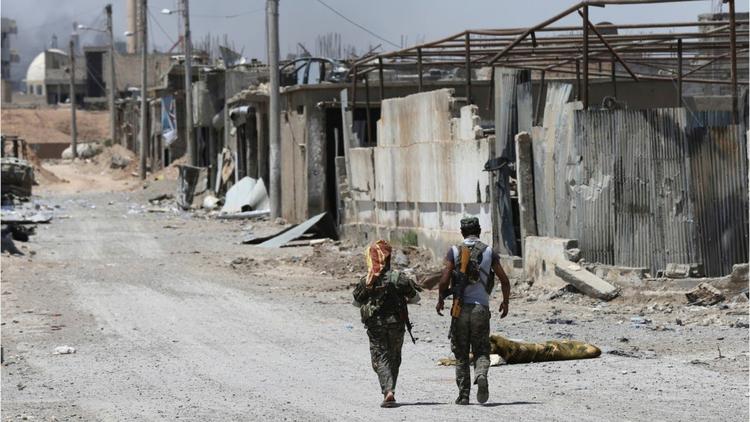 The US is warning Syria against attempting to recover lands lost to rebels south of Damascus.

Some of those rebels are ISIL or affiliated in some way to al-Qaeda. That is, the US is now doing the opposite of what it said it was going in to Syria to do.

It is often alleged that US military presence in Syria is illegal in international law, and that it is not even constitutional.

The Obama administration sent special operations forces into northeast Syria to help leftist Kurds take on ISIL. ISIL has largely been defeated, but the troops (some 2,000 plus a rumored further few thousand mercenaries) are still there.

Obama’s lawyers maintained that the US has a right to go into Syria in self-defense, to defeat ISIL, which was plotting attacks in the United States.

The standing congressional Authorization for Use of Military Force is looking pretty long in the tooth. That authorization spoke of hunting down the people responsible for the September 11, 2001 attacks. ISIL was formed in 2012 and it is a little unlikely that virtually any of its members were involved in 9/11.

So the US has now helped create a very large eastern and northeastern Kurdish enclave in Syria (Kurds are about 10 percent of the national population).

Apparently, the US special forces and the US Air Force are committed to now protecting the territory taken by the Kurds (much of it inhabited by Sunni Arabs). To that end, they have fought Syrian government troops, and even a small Russian mercenary battalion.

But how is fighting Syrian government troops part of the US mission in Syria? Only by virtue of mission creep. You had to stand up the Kurdish force to fight ISIL, now you feel the need to defend newly Kurdish-dominated territory.

The Pentagon is saying that since the US was part of the negotiations leading to the deconfliction zone south of the capital, it has the right to intervene there to maintain the cease-fire.

Some observers suspect that the US is simply running interference for the Israelis, who have occupied part of the Golan Heights and the permanent annexation of which the US is preparing to recognize. The Israeli government does not want Syria going south because they don’t trust Damascus to keep the Lebanese Shiite militia, Hizbullah, away from the Israeli border. The de facto Syrian side of the Golan is largely held by the a group (formerly known as Nusra Front) with ties to al-Qaeda.

So de facto, the US and Israel are protecting some al-Qaeda fighters (among a large number of non-extremists).

Mission creep can go very wrong very quickly, as the US discovered in Vietnam.

U.S. Warns Syria That Ceasefire Violations Will Be Met With ‘Firm’ Measures