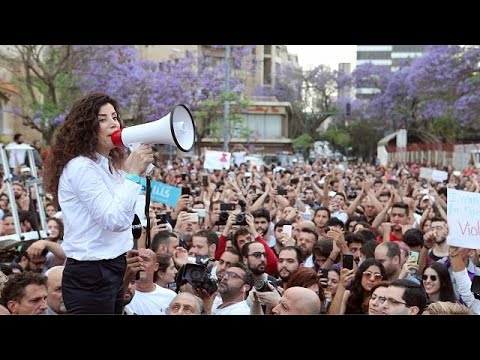 Lebanon held the first parliamentary elections since 2009 (they are supposed to be every 4 years but the Syrian civil war and political gridlock made it difficult to meet that schedule until now).*

Given all the talk of Trump pulling out of the Iran deal in part because of Tehran’s supposed regional dominance, the results of the Lebanese elections will likely be entangled with this policy.

The big divide in Lebanon back in the first decade of the 21st century was over the Syrian military presence in the country. Most Maronite Catholics and the Sunni Arabs and Druze and some other groups wanted the Syrians out, and staged huge demonstrations to that effect, the biggest on March 14. They were outraged by the assassination of Prime Minister Rafiq al-Hariri in February of 2005. Demonstrations almost as big were staged by Shiites, Orthodox Christians and some others in favor of Syrian troops remaining, the biggest on March 8.

March 14, spearheaded by the Sunni Arab Future Party of Rafiq al-Hariri’s son Saad, appeared to win, with Syrian troops going home late that spring. March 8 (including Hizbullah) seemed a bit in the political wilderness, though even the US ambassador urged they be given representation in the cabinet.

In the 2009 parliamentary elections, Hariri and Future and its allies won a majority in parliament. Hariri is a dual Lebanese-Saudi citizen and his dominance meant hegemony for Riyadh in Lebanon.

But over time, the political tides turned against Hariri, the Future Party, and therefore Saudi Arabia and the United States. The erratic Walid Jumblatt, the warlord leader of the Druze, an esoteric offshoot of Ismaili Shiism, broke with Hariri though he never made up with the Syrian regime.

Then the Syrian Civil War broke out from 2011 and changed everything. Most Sunnis in Lebanon hated the Syrian government, a semi-Stalinist one-party state disproportionately dominated by the Alawite Shiite minority.

But Christians in Syria and in Lebanon were frightened by the turn of the rebel opposition in Syria to Salafism and Sunni extremism and calls for sectarian ethnic cleansing by rebels such as Zahran Alloush, leader of the Saudi-backed Army of Islam.

Most Christians were therefore at least neutral and in some instances actively positive toward the Bashar al-Assad government as a secular bulwark against Saudi-style extremism. The ground was laid for a big shift in Lebanese politics, especially now that Syrian troops were long gone from Lebanon. The Shiites and Aoun Christians more or less allied (formally but more recently less formally), and the Druze peeled off from the Sunni Arabs. Shiites, Maronites and Sunnis are roughly 30% each of the electorate and Druze are 6 percent. Basically the Sunnis ended up being isolated in their support for the neighboring rebel opposition in Syria. Their case was not helped by the rise of a small radical Salafi movement in Sidon or by al-Qaeda-linked attacks from Syria on Lebanese villages.

So by 2016 the Shiite Hizbullah and its allies came to dominate the cabinet. They nevertheless persuaded Saad Hariri to join as prime minister in a national unity government.

Hariri’s de facto cooperation with Hizbullah grated on his Saudi patrons, and last fall the slightly unhinged crown prince of Saudi Arabia, Mohammed Bin Salman, kidnapped Hariri and forced him to resign. The resignation from abroad while in captivity was not accepted back in Beirut, and France’s Emmanuel Macron intervened to broker Hariri’s release. Although Hariri got a big bump in the polls temporarily, the episode seems to have hurt him badly with his own Sunni constituency.

So the result was that the Future Party saw a big decline from 36 deputies in parliament to only 21 in the 128-member parliament.

In contrast, Hizbullah, representing lower middle and working class Shiites in the South and many in East Beirut and Biqa’, and its ally Amal, representing Shiite middle classes and big businessmen, gained the 29 seats allotted to the Shiites, maintaining their strength. (In the past, Hizbullah and Amal were not on good terms, but they have patched things up for now. Amal is widely disliked as corrupt and needs the alliance with Hizbullah). Small allies of Hizbullah got another 11 seats.

Although the Shiite bloc lost its formal ally, the Free Patriotic Movement (Christian supporters of president Michel Aoun), because of political differences, the two did ally in some local constituencies and will probably continue to cooperate politically. Aoun’s deputies won 17 seats.

The outcome is to some extent a reversal of 2009, inasmuch as the Sunni Futurists are now small and isolated, whereas the old March 8 coalition partners dominate.

But some nuance is needed here. March 8, 2005 was a long time ago. Hizbullah and Amal are not always on the same page. Hizbullah is generally strongly pro-Iran while Amal mostly follows Grand Ayatollah Sistani of Iraq and rejects the Iranian system. The Free Patriotic Movement Christians are not exactly in the back pocket of Hizbullah, though they have made pragmatic alliances of convenience in the past. The Druze, who have coreligionists in Israel and Syria, are also pragmatic. Some Druze support al-Assad, and even the Jumblatt faction is willing to cooperate with Hezbollah in a national unity government, declining to try to fight Damascus and Tehran from little Beirut.

The announcement by an Israeli spokesman that his country would henceforth consider the government of Lebanon to be identical with Hizbullah is just belligerent propaganda and sour grapes. Hizbullah per se typically has 13 or so members in the 128-member Lebanese parliament. Configuring middle class Shiites of Amal, Maronite FPM voters of Jounieh etc. as “Hizbullah” or “ayatollahs” is typical Israeli political analysis as deadly lethal silliness. We may as well say we will consider Israel a fascist state because it is governed by a Likud Party coalition.

One big takeaway, it seems to me, is that Saudi Arabia shot itself in the foot three times with regard to Lebanon. It supported Salafi jihadis like the Army of Islam around Damascus, who thundered about killing members of ethnic minorities. Then MBS kidnapped Hariri, underlining that he was literally captive to Riyadh. Then MBS kissed up to the Israel lobbies and threw the Palestinians under the bus. Israel is not popular with Lebanese Sunni Arabs, who stayed home in droves during the polls.

With this kind of regional policy, no wonder Saudi Arabia is losing to a much cannier Iran. Not able to compete because of horrible policy, MBS has to run to Trump to plead with him to hit out at Iran on Riyadh’s behalf.

Euronews: “Hezbollah and its allies make electoral gains in Lebanon”

—
*This essay was slightly revised after publication to clarify the shifting stances of Walid Jumblatt and to correct an assertion that he “made up” with Syria; it was Hizbullah with whom he made up.