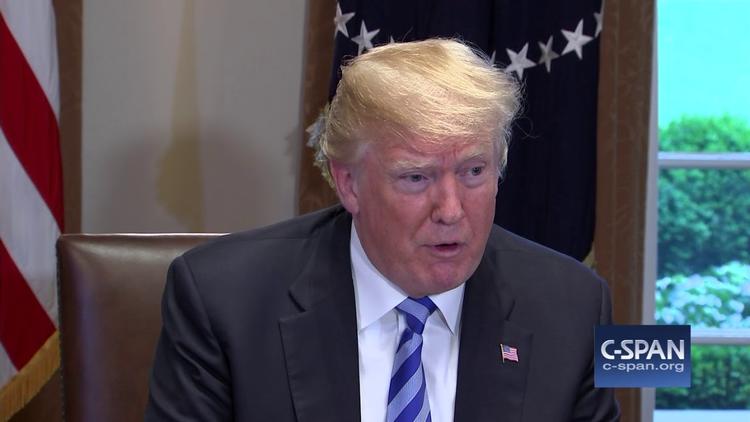 In the beginning of the internet back in the late 1980s and early 1990s when you for the first time had large and contentious discussions online at bulletin boards like Usenet, attorney Mike Godwin noticed that the longer a discussion went on, the more likely it was that someone would make a Hitler comparison. Some internet aficionados even declared a thread over when someone evoked the National Socialists of the 1930s. The implication was that such a comparison was always hyperbolic.

The problem with Godwin’s law is that it emerged at a time when we did not expect to have a Neonazi president. Not being able to point to the real similarities of Trump’s White Nationalist discourse with Nazi premises about racial hierarchies would actually be dangerous at this point. And we have seen Mr. Trump defend self-avowed Neonazis and Klansmen at Charlottesville. It is not an optical illusion.

So yesterday Trump again called some undocumented migrants into the US “animals.” Calling people animals has been a parlor sport with Mr. Trump, and he has often gotten things wrong, as when he used his wealth to persecute the falsely accused Central Park 5.

Calling people “animals” is not just the use of an ugly epithet. It is not merely impolite.

It is a call to mistreat the class of people so designated, to fear them and blame them and ultimately to seek to wipe them out.

“Animal” functions similarly in this regard to the Nazi technical term “Untermensch” or underman, subhuman.

Richard A Etlin in Art, Culture, and Media under the Third Reich translates passages from the infamous SS pamphlet of 1941, entitled Der Untermensch:

“It is a frightening creature, a mere shadow of a man, with humanoid racial features, yet spiritually and psychologically more base than any animal. Within this being rages a vile chaos of wild, uncontrolled passions, a nameless desire for destruction, the most primitive desires, and naked vulgarity.”

The pamphlet goes on to be more specific about the identity of this horrible category of apparent human beings, who are actually animals or worse. It specifies eastern Slavs (Russians and Poles) and Jews, among others. Not even some members of those groups, but all of them. The pamphlet functioned as a call for and a justification for the genocide against the Jews, Gypsies, gays and other groups as well as the slaughter of Russian boys at the eastern Front.

That is, denigrating people as less than human is a step toward permitting their elimination.

Trump apologists would say that he is only calling gangbangers “animals,” not all Mexicans or Mexican-Americans. But anyone who actually has listened to him talk about those groups knows that he tars them all with the brush of gang violence. It is worth underlining that the vast majority of immigrants are law-abiding, since they fear that tangling with law enforcement could get them deported.

There are some 55 million Hispanic people in the US. Less than one percent of them are gang members. Of the some 16,000 murders a year, only small percentage appear to be tied to gangs. Of the total, typically nearly a quarter are cases of close family members killing one another. Over half of women victims of homicide in the US are killed by an intimate, i.e. boyfriend, spouse or former such. In general, most murder victims are killed by someone they know, not by a stranger from among the Undermen or “animals.” Only about 12% of victims are killed by a complete stranger. The best predictor for perpetration of violent crime is not ethnicity but poverty. Nor should we give up on rehabilitating people who commit crimes, even violent crimes. They are human beings, not animals.

Although Trump’s initial move in eliminating those he sees as Undermen is to make sure they are deported if their papers are not in order, we have already seen at Charlottesville that he condones white nationalist violence against anyone who disagrees with him. He could be pulling our society into more and more frequent racial confrontations. Minorities who fight back will be labeled terrorists by the president of the United States. That this polarization Trump is trying to provoke could ratchet up into anti-Latino pogroms cannot be ruled out.

It is unfortunately worth pointing out that although the Jews were on the receiving end of discourse about dangerous subhumans in the Germany of the 1940s, today in Israel it is all to common to hear politicians refer to Palestinians as “animals.” That discourse is how you get rules of engagement where it is all right to shoot down unarmed, peaceful protesters in Gaza.

There are no Undermen. All human beings have the same rights.

President Trump: “These aren’t people. These are animals.” (C-SPAN)