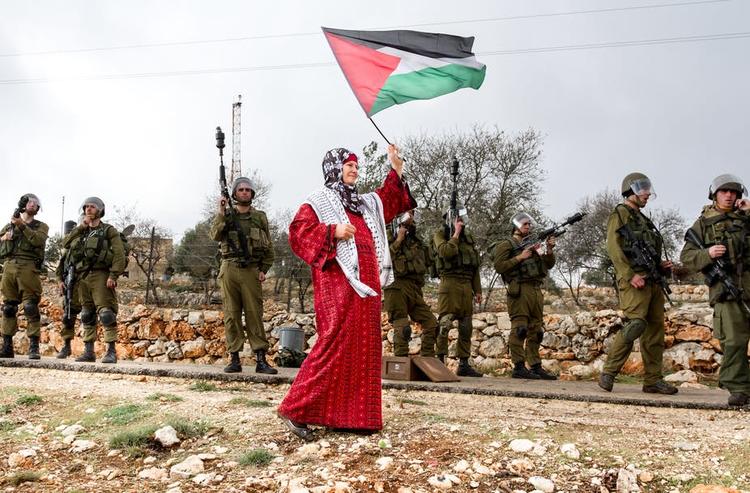 Outside observers tend to imagine the face of Gaza as resolutely male: the bearded Hamas “militant”, or the young man hurling stones across the border fence. But Palestinian women, both in Gaza and the West Bank, have a significant presence as activists, protesting against an unjust occupation, but also as the backbone of a fragmented and demoralised society.

Women have been active in the Palestinian struggle since its early days. In the 1920s, they protested side by side with men against British control of their country. They formed charitable organisations and expressed themselves politically.

After the state of Israel was created in 1948, the majority of Palestinians were forced to flee into exile, and here too women played a key role as protectors of their families, and repositories of the “national story”. It was vital that Palestinians, wherever they were in the world, did not forget what had happened and continued to insist on their right of return to their homeland. Women passed their memories of Palestine down to subsequent generations.

In the 1960s, with the emergence of a Palestinian liberation movement, dedicated to regaining the lost homeland, some women turned to more militant activities. Leila Khalid, for example, hijacked several airliners on behalf of the Popular Front for the Liberation of Palestine and became a familiar face in the Western media.

Mural of Leila Khaled on a wall in Bethlehem.
Rehgina/Wikimedia Commons, CC BY-SA


Gradually, women also started to engage in formal politics, through membership of the main Palestinian political factions. Although Palestinians tend to be socially conservative and are anxious to shield women and girls from what might be considered “dishonourable” or nontraditional behaviour, many younger women found a new kind of freedom through education and political mobilisation.

A largely non-violent intifada (or “uprising”) began in 1987. Women, men and children combined efforts to resist the 20-year occupation of their land. They did so in innovative ways, for example by establishing alternative educational facilities for children after all the schools were closed, creating an alternative economy based on home produce, as well as engaging in large-scale protests.

There were also attempts at dialogue between Palestinian and Israeli women. For example, in July 2006, members of the International Women’s Commission for a Just and Sustainable Palestinian-Israeli Peace (IWC) convened an emergency meeting in Athens. They urged the international community to intervene. In their words:

Civilians, mainly women and children, are paying the price daily for this vicious cycle of retaliation and counter-retaliation. This is a time of great danger … If no action is taken today, tomorrow will be too late.

Although no resolution came out of this or similar calls, initiatives involving women from the two sides were judged to have been among the most promising.

Such activities ended in 2000, with the start of the second intifada. The resistance was no longer a shared endeavour involving all sectors of society – it was an armed confrontation. Women suffered greatly from rising levels of violence and decreasing security for civilians.

No one felt safe. Girls travelling from their homes to university were likely to experience harassment at Israeli army checkpoints and, as a result, many parents started to keep their daughters at home, and even to marry them off at the earliest possible opportunity; the age of marriage began to fall.

As the economic situation deteriorated, women had fewer opportunities for employment. Incidences of mental illness rose and women exhibited deep anxiety about the safety of their children.

Many Palestinians feel that they have no control over their own lives. Under a harsh Israeli regime, it has been very difficult to exercise agency and Palestinian political parties have seemed weak and ineffectual. The Islamist party Hamas seemed to offer a more assertive form of opposition, and many women were attracted by its grassroots organising and evident ability to confront the Israeli occupation. Some became militants.

While it may be tempting to argue that the participation of women in violence is a sign of a society that has lost its way, the reality is more complex. Many Palestinian women point out that their community is powerless; it has neither the political leadership nor the weapons to fight a conventional war. Instead, it relies on all its members to participate and “tell the world” what is happening to them.

By protesting at the Gaza-Israel border to mark the anniversary of al-nakbah (“the catastrophe”), Palestinians are reminding the world that they were dispossessed 70 years ago and this injustice has still not been remedied. Palestinian women, as much as men, have a vital stake in finding a solution to the conflict, that will provide safety and certainty for the next generation.

Maria Holt is a Reader in the Department of Politics and International Relations at Westminster University. Following a career as a political lobbyist, specializing in the Middle East, and a parliamentary researcher, she returned to university in the late 1990s to pursue PhD research. She wrote her PhD dissertation at the University of York in 2004, on the effects of violent conflict on Shi'i women and Palestinian refugee women in Lebanon. She obtained a BA (Honours) in Political Science and Middle East & Islamic Studies from the University of Toronto, in 1987; and an MA (with Distinction) in Middle Eastern Politics from the University of Exeter, in 1988.