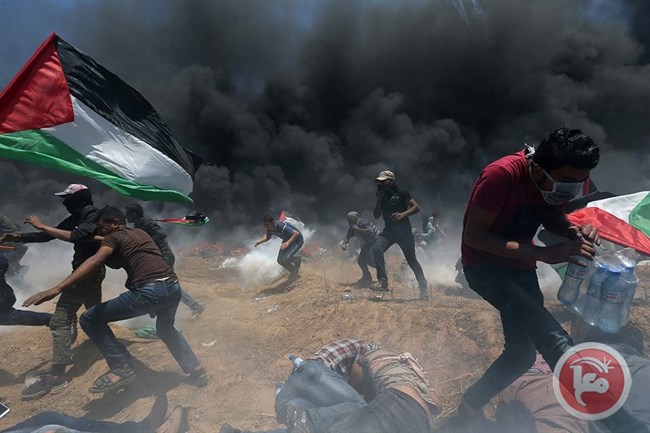 Social media is being scathing about the diction chosen by the New York Times, CNN and even the Guardian to speak of the some 55 peacefully protesting Palestinians whom Israeli snipers cold-bloodedly shot dead on Monday and the some 2700 whom they wounded, half of those with live fire. The headlines or lead paragraphs spoke of Palestinians “dying,” as though they had mysteriously and unexpectedly contracted the unusual disease of bullet penetration. (The NYT cleaned up its act on Tuesday in the wake of the criticisms; people do what they think they can get away with; but this isn’t a new problem with its word manipulations when it comes to Israel).

I just heard CNN International, which is usually more adult than the American version, say that “clashes” resulted in “deaths,” “many of them” caused by Israeli fire. So there were no clashes. All the Palestinians died on their side of the Israeli prison fence. No Israelis were injured. And all of the injuries were caused by Israeli fire, whether live or rubber bullets (they can be lethal) or drones dropping teargas cannisters. “Many of them” were children or journalists.

Why is it so hard to admit that the Israeli army, and Israeli squatter settlers, routinely kill Palestinians? (If you follow daily news from the West Bank, there is a low intensity conflict there with serious incidents every day.) The current neofascist Israeli government even has adopted a doctrine that Palestinians may be killed at will even when they pose no danger to anyone, if they aren’t doing what Israelis tell them to do.

It is because the West categorizes Palestinians as dinosaurs, not mammals. They are the last colonial subjects, not citizens. They have no state. There is no contemporary category for them. They are unique. People compare them to West Saharans or Kurds but they are not actually like them. Kurds and Saharans have passports and citizenship in a state. They are subnationalists who want a different citizenship and a different passport, one that does not yet exist. That aspiration is different entirely from being stateless. Palestinians cannot easily travel. They only have a laissez-passer and receiving governments are afraid they will stay. They are all inmates. They often cannot own property, as in Lebanon, or their property is insecure, under constant threat of Israeli expropriation or destruction. Their lives are made of silly putty.

Palestine is the last colony, a relic of the early twentieth century when Britain bestrode the globe as an imperial behemoth, ruling India, Malaya, Nigeria– colonies that went on to become independent countries and among the more important countries in the world. Not so the British Mandate of Palestine.

Colonial subjects were always invisible to the metropolitan press. They were supposed to be like Victorian children, seen but not heard, and were to produce profits for imperial Capital. When it reported on an investigation into the infamous Jallianwalla Bagh massacre in Amritsar of 1919 by order of Col. Reginald Dyer, The Aberdeen Journal entitled its article “Amritsar Riot.” It was a protest and not a riot, and what was remarkable about it was not the disturbance caused by the colonial subjects but the British massacre of them. Crowds had gathered to protest the exile of two nationalist leaders. Dyer had forbidden public rallies or protests, just as the Israeli army has forbidden Palestinians to protest near the prison fence at Gaza. It is not clear that the Indians had heard about the prohibition, but even if they had, they were not going to be deterred from rallying. Dyer had them shot down by live fire, for ten minutes straight, killing according to the British 379 and wounding 1200 (Indian historians have arrived at much higher figures).

Just as the Scottish press focused attention not on the British soldiers who committed the massacre but on the colonial subjects who acted out and “rioted,” so today’s European and American press sees the Palestinians of Gaza as engaged in “clashes” even though they must be shadow boxing, since they have not laid a hand on anyone.

British imperial policy thought nothing of moving people around if they were inconvenient. When the British conquered Iraq away from the Ottoman Empire in the course of WW I, they immediately started dreaming of settling it with millions of Panjabis. They felt they had too many Panjabis in British India and did not understand demography very well, and so wanted to deal with the problem by massive population displacement. If you think Iraq has challenges in finding a national narrative to accommodate Shiites, Sunni Arabs, Christians, Kurds and Turkmen, imagine if it also had millions of Sikhs, Hindus and Panjabi Muslims. As it turned out, the British found it impossible to rule Iraq except by bombing the bejesus out of it daily, to the point where the Royal Air Force officers who mounted these aerial campaigns against villagers who wouldn’t give up their arms worried that the British public would find out about these unsavory proceedings. Britain gave up and granted Iraq partial independence in 1932, though they continued to meddle there until 1958. “Bomber Harris” of Iraq fame went on to plan out the Dresden firebombing during WW II.

When slavery ended, the nineteenth-century British had needed agricultural labor in tropical climates where malaria and yellow fever made it impossible for most Europeans to survive, they tricked large numbers of Bengali and Oudh peasant workers into signing indentured labor contracts for a nearby island in the Bay of Bengal. Imagine the peasants’ surprise to find themselves in Fiji in the middle of the Pacific Ocean, or in Trinidad or Guyana in the New World, from which most of them found it difficult ever to return. The British bequeathed Fiji a long term problem of ethnic division such that politics is now a fight between Polynesian Fijians and South Asians. I hope the plantation profits were good for London.

The tragedy in Palestine involves complex moving parts. Instead of insisting on Ashkenazi Jews’ rightful place in post-war Europe, especially in Germany and Poland (yes, I am breaking Polish law), the Europeans, including Britain, were happy to dump the Holocaust survivors in the Levant, where they could be turned into compradors against rising Afro-Asian nationalisms. Mauled by Central European virulent racist nationalism, some Jews replied with Betar, Likud and other Jewish supremacist organizations modeled on the mass politics of the interwar period and accepting many of its premises about racial hierarchies and the desirability of belligerency. The British colonial authorities abruptly withdrew, allowing the Jews they had brought to Palestine for imperial purposes to ethnically cleanse the Palestinians. 70% of the Palestinian families in Gaza are refugees from what is now southern Israel, trapped in the Gaza Strip and denuded of property, dignity and prospects.

That is why Palestinians in Gaza are rallying at the fence and insisting that the world will not be allowed to forget two million stateless persons trapped and under blockade in an Israeli concentration camp.

And that is why the neo-imperial powers, who find this clamor of colonial subjects distasteful, erase them from the story, having them “die” or “be killed” in the passive mood.

Whenever you read of someone killed in the passive mood, you may be assured that a cover-up is being conducted by the murderers and their accomplices.